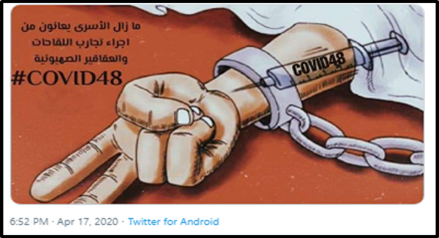 New findings reveal how in wake of coronavirus both the far right, and the far-left, alongside Iranian and PA officials, are spreading similar libels, conspiracy theories and calls for violence against Jews and Jewish State. Report calls for social media giants and governments to take greater action in curtailing alarming rise in hate speech.

Jerusalem, Israel ─ May 12, 2020─ Today Minister Gilad Erdan’s Ministry of Strategic Affairs released its latest report, “The Virus of Hate”, on the sprouting of classic and new forms of antisemitism and Israel delegtimization tied to the coronavirus. The report presents a comparison and exposes the troubling similarity between the far-right which disseminates “classic” antisemitic theories, and Iranian and Palestinian officials along with far-left activists propagating “new” antisemitism in their delegitimization against the State of Israel. The report calls on governments and social media giants to increase security following threats of physical violence against Jewish communities.

The prevalent theme in the report is that the coronavirus provides a perfect “test case” for observing how a common motif and libel is being used by both classic antisemites on the far right against Jews, and new antisemites and Israel delegitimizers, including the far left, against the State of Israel. The common motif of much of the antisemitic rhetoric of both these groups is the equation of Jews and/or Israel to the coronavirus, with the libel that Jews/Israel are using or spreading the virus for political or economic gain. For example, IDF soldiers are accused of deliberately infecting Palestinians through coughing, similar to the classic antisemitic libels whereby the alt-right blames Jews for spreading the coronavirus, just as Jews were blamed for spreading the Plague.

In 2019 the Ministry of Strategic Affairs released its report “Behind the Mask”, which revealed over 80 examples in which senior BDS officials made and shared antisemitic allegations, images and cartoons as an integral part of their campaign against the State of Israel. The “Virus of Hate” report illustrates that, contrary to the claims of the delegitimization and BDS campaigns that they do not traffic in antisemitism, parts of their hateful rhetoric relating to the coronavirus is demonstrably similar to clearly antisemitic rhetoric of the far right.

The severity of the situation was expressed recently by Ahmed Shaheed, the UN Special Rapporteur for Freedom of Religion or Belief, who warned the rise in antisemitism surrounding the coronavirus raises the need for “tougher” measures against the phenomenon.

Minister of Strategic Affairs Gilad Erdan: “The ministry I lead, the Ministry of Strategic Affairs, regularly takes care to expose the ugly truth behind the inciters and antisemites around the world .It is disturbing to discover that, even in a global crisis, there are those who are working overtime to incite hatred against the Jewish people. As such, I urge the countries of the world to take a firm stance against hate speech and antisemitism, especially during this time. There is no room for such hatred. We will continue to fight against Israel’s detractors.”