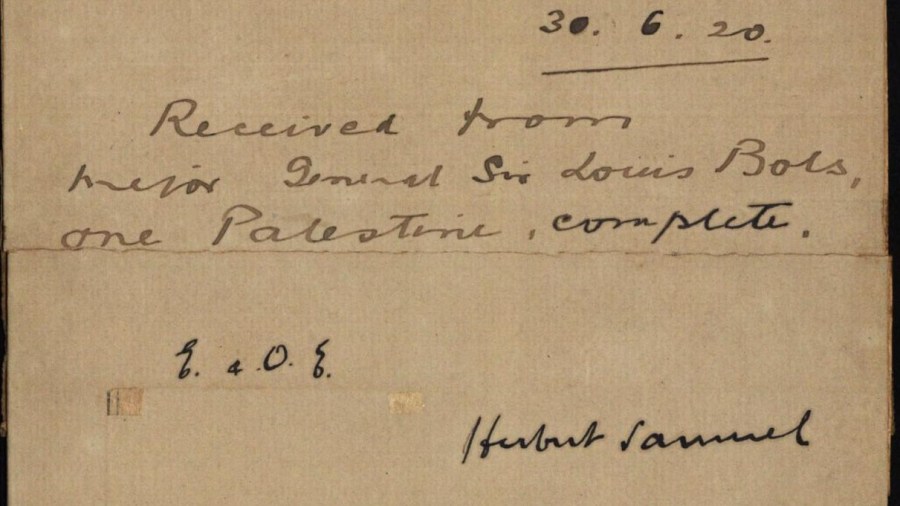 On June 30, 1920, 100 years ago, Herbert Samuel landed in Palestine to assume his duties as Britain’s High Commissioner of the Mandate. He left Palestine in 1925 with one of his last duties attending the opening of Hebrew University. Much took place during his five years in office – firebrand Haj Amin el Hussein was appointed Grand Mufti, Arab rioters attacked Jewish communities, a British “White Paper” limiting Jewish immigration was issued, the Chief Rabbinate was established, and extensive public works were carried out.

Herbert Samuel was active in British politics and a committed Zionist. At the beginning of World War I, Samuel, then serving in the Home Office, drafted a memorandum, “The Future of Palestine,” which he gave to Foreign Secretary Edward Grey and Chancellor of the Exchequer Lloyd George. He proposed a Jewish state as a “foundation of enlightenment.”1 Little attention was given to the idea by the government until the Palestine front developed into a full-fledged war.

Samuel’s national standing can be deduced by this recruitment poster directed at the Jewish communities in the British Commonwealth, including Canada.

When the war in Palestine ended in 1918, a military government was established. Many officials and officers who were opposed to the Zionist goals, such as Col. Ronald Storrs, discriminated against the Jewish communities in many areas of administration and preferred to respond to Arab demands. “Thoroughly unsympathetic to the Zionist cause, Storrs made sure that, for example, Jerusalem’s Jewish majority was not reflected in the distribution of municipal power,” according to Balfour 100, a site dedicated to the Balfour Declaration centenary.2

When the time came for the British Government to appoint a civilian to head up the Mandate for Palestine, Samuel was considered, but both Samuel himself and Gen. Edmund Allenby, the commander of the Palestine victory, believed a Jewish High Commissioner would meet with Arab opposition. In the end, Samuel acceded and accepted the post, thinking he could carry out his duties impartially.

Just weeks after arriving in Jerusalem, Samuel and his wife walked to the Yehuda HaHasid “Hurva” synagogue in the Old City on Sabbath Nachamu, the Saturday after the Jewish fast day of Tisha B’Av. When he entered, people reacted as if the Messiah had arrived. Rabbis and secularists rose as he was called to read from the Torah and additional reading called the Haftorah.3 Even the anti-religious linguist Eliezer Ben-Yehuda donned a prayer shawl. Samuel read from the book of Isaiah, “Comfort, comfort, My people, says God. Speak to her heart of Jerusalem and proclaim to her that her time [of exile] has been fulfilled…”

In the next months, Samuel visited Arab, Christian, and Jewish communities and launched significant infrastructure projects like replacing the narrow-gauge rail line between Jaffa and Jerusalem.

In May 1921, riots broke out in Palestine, which took on the appearance of pogroms against Jewish communities. In his June 30, 1921, first annual report to the British Government, Samuel was cautious in blaming the Arab rioters: “Troops were employed and suppressed the disturbances, and the attacks on the [Jewish] colonies were dispersed with considerable loss to the attackers… [M]uch excitement prevailed for several days in Jaffa. For some weeks, there was unrest. Eighty-eight persons were killed, and 238 injured [Jews? Arabs?], and there was much looting and destruction of property.”

Despite the appointment of a Commission of Enquiry, months later, Samuel reported, “it has not yet presented its report… I refrain, therefore, from further description of the Jaffa disturbances.” Even in reporting the arrest of more than 40 rioters, the High Commissioner refrained from describing their affiliations.

In response to the rioting, the High Commissioner promulgated his government’s “white paper,” “suspending all immigration for the time being.” He continued with an excuse repeatedly used by the British government over the next 30 years to restrict immigration, “But in any event, it was becoming increasingly evident that the flow of immigrants was greater than the country was able to absorb.”

An additional blow to the Jewish community was the pardoning of the ring-leader of the Arab rioting, Haj Amin al-Husseini, and appointing him as Grand Mufti. From his government-sponsored post, al-Husseini turned life into Hell for the British and Jews in Palestine and even met with Hitler to plan the Final Solution in the Holy Land.

Samuel’s first annual report in June 1921 had a special section on “Trans-Jordania.” After all, he wrote, “the area of the Palestine Mandate [includes] the territory of Trans-Jordania.” Only later was it learned that Churchill had agreed with Emir Abdullah in 1921 to lop off the part of Palestine east of the Jordan River and establish Jordan.

In April 1921, the High Commissioner of Palestine traveled to Amman with Col. Lawrence (of Arabia) to discuss the truncating of Palestine.

Before leaving Palestine, Herbert Samuel had the opportunity to address the official opening of the Hebrew University in 1925, along with Lord Balfour and General Allenby.

Herbert Samuel was not the Messiah that many Jews had hoped for after the famine, disease, and travails of World War I. His government’s concessions to Arab aggression only encouraged further violence for almost 30 years. And in many ways, the pattern repeats itself until this day.

Samuel, however, was a fervent Zionist in his heart, as can be seen in these paragraphs taken from his 1921 Annual Report on the Civil Administration of Palestine.

It is obvious to every passing traveler, and well-known to every European resident, that the country was before the War, and is now, undeveloped and under-populated. The methods of agriculture are, for the most part, primitive; the area of land now cultivated could yield a far greater product. There are in addition large cultivable areas that are left untilled. The summits and slopes of the hills are admirably suited to the growth of trees, but there are no forests. Miles of sand dunes that could be redeemed, are untouched, a danger, by their encroachment, to the neighbouring tillage. The Jordan and the Yarmuk offer an abundance of water-power; but it is unused….

[Prior to 1880, Jews] came to pray and to die in the Holy Land, and to be buried in its soil. After the persecutions in Russia forty years ago [1880], the movement of the Jews to Palestine assumed larger proportions. Jewish agricultural colonies were founded. They developed the culture of oranges and gave importance to the Jaffa orange trade. They cultivated the vine, and manufactured and exported wine. They drained swamps. They planted eucalyptus trees. They practised, with modern methods, all the processes of agriculture. There are at the present time 64 of these settlements, large and small, with a population of some 15,000. Every traveller in Palestine who visits them is impressed by the contrast between these pleasant villages, with the beautiful stretches of prosperous cultivation about them and the primitive conditions of life and work by which they are surrounded.]4