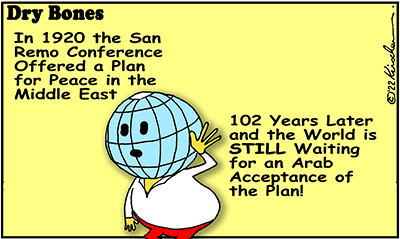 The San Remo Conference held on 24 / 25 April 1920 marked the beginning of self-determination for both the Jewish People after 3000 years of dispersion and the Arabs after 400 years of Ottoman rule.

Among those participating in the Conference – indicating its historic importance and the significant decisions it would be tasked with making:

Earl Curzon of Kedleston, Secretary of State for Foreign Affairs;

The Minutes of the Meeting were headed:

MINUTES OF PALESTINE MEETING OF THE SUPREME COUNCIL OF THE

ALLIED POWERS HELD IN SAN REMO AT THE VILLA DEVACHAN

However the agenda covered far more than Palestine – dealing with: –

“the question of mandates for those territories which had been Mandates formerly under Turkish domination and which it was proposed should, in the future be administered by the various Principal Allied Powers”

Those territories were identified as Mesopotamia and Syria as well as Palestine.

“that Syria and Mesopotamia shall in accordance with the fourth paragraph of article 22, Part I (Covenant of the League of Nations), be provisionally recognised as independent States subject to the rendering of administrative advice and assistance by a mandatory until such time as they are able to stand alone. The boundaries of the said States will be determined, and the selection of the mandatories made, by the Principal Allied Powers”

Mesopotamia gained independence in 1932 and Syria in 1946.

The Jews were initially allotted all of Palestine at San Remo –117000km2 – the remaining 15% of these three liberated Turkish territories – within which the Jewish National Home was to be “reconstituted” after 3000 years.

However 78% of Palestine east of the Jordan River (Transjordan) was whittled away for Arab independence by the time the League of Nations Mandate for Palestine was promulgated in July 1922 – leaving Jewish self-determination to happen in just 3% of the territories dealt with at San Remo.

The British Government’s 1921 Interim Report on the Civil Administration of Palestine recorded that hardly 700,000 people were living in Palestine west of the Jordan River– 560000 of whom were Moslems, 77000 Christians and 76000 Jews:

“a population much less than that of the province of Gallilee alone in the time of Christ * (*See Sir George Adam Smith “Historical Geography of the Holy Land”, Chap. 20.)”.

About 350000 non-Jews lived in Palestine east of the Jordan River:

The San Remo Conference unanimously agreed that the civil and religious rights of these existing non-Jewish communities in Palestine were not to be prejudiced by San Remo’s decisions and that the rights and political status enjoyed by Jews in any other country were also not to be affected –guarantees that were expressly included in the terms of the Mandate for Palestine.

The Arabs have never accepted that the decisions simultaneously made in relation to Mesopotamia Syria and Palestine at San Remo in 1920 were part of a plan that by 1922 offered:

The Jewish-Arab conflict will remain unresolved whilst the Arabs remain in their 102 years-old state of denial.