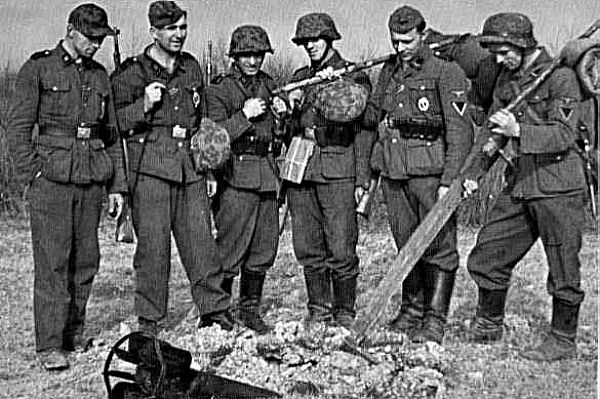 When the German officers who fired on innocent women, children and the elderly were lawyers, their academic status is certain to have influenced the soldiers under their command. A comparable case can be made with regard to SS General Max Thomas, Dr. Otto Rasch’s successor as commander of Einsatzgruppe C, who had medical and psychiatric degrees. [1]

Six of the 15 Einsatzgruppenführer had doctoral degrees. At least three others studied law. Moreover, 16 of the 69 Einsatzkommandoführer also had doctoral degrees. Most of the men in these leadership positions became members of the SS, the SA (Nazi Party militia) or the National Socialist German Workers’ Party (NSDAP) as soon as they were eligible to enlist. Their decisions reflected the esteem to which the Nazi Party was held by young students during the Weimar Republic. At a later point, most became civil servants in the Ministry of the Interior. From the ministry, they were arbitrarily sent to the East. [2]

Nine of the dissertations were completed before the Nazis assumed power, the rest were obtained during or after the Nazi legal takeover of the government. Twelve degrees were in law, three in political science, two in science and one in medicine and one in German literature. “That the authority of law and medical science can be used in this way,” asserted Benno Müller-Hill, a German biologist, “is certainly one of the most disquieting discoveries and achievements of the Nazis.” Furthermore, when science is seriously sustained by a government because the “leadership believes in it as if it were a religion, it has a great appeal to young people.” And the young Germans were eager to begin the new jobs the government had created. The message in Germany was clear: “We are the higher race, we shall therefore remain, and the others will disappear from this earth.”[3]

Most of the men who led the Einsatzgruppen were intellectuals. A large majority were professional men. As already noted, they were not thugs, delinquents, common crooks, or sexual deviants. [4]

A “Racial-Ideological War of Extermination”

On September 17, 1941, Max Thomas, SS-Gruppenführer and Generalleutnant der Polizei, called for the “complete extermination of the Jews in Western Ukraine “to remove thereby the most fertile soil from Bolshevism,” claiming they were “without any doubt less valuable as laborers compared with the damage they do as ‘ carriers’ of communism.” [5]

For Hitler, there was no difference between Jewish and Bolshevist power. He believed that by conquering Russia, Germany’s status as a world power would be restored, thus enabling Germany to confront even the United States. [6] Anti-Bolshevism became a critical factor in developing the extermination policies while Operation Barbarossa was still in the planning stages. Anti-Bolshevism also played a decisive part in the German military’s decision in the East—except for some—to provide significant assistance to the Einsatzgruppen. [7]

Linking alleged Jewish control of the world to Bolshevism was a strategically enlightened move. This is apparent in the “notorious orders” issued by Field Marshal Walter von Reichenau, Commander in Chief of the 6th Army as part of Army Group South, Colonel-General Hermann Hoth, commander of the 3rd Panzer Group and Field Marshal Erich von Manstein, commander of the 11 Army. [8]

On October 10, 1941, von Reichenau issued “Conduct of Troops in the Eastern Territories,” which stated:

“The most essential aim of war against the Jewish-Bolshevistic system is a complete destruction of their means of power and the elimination of Asiatic influence from the European culture. In this connection the troops are facing tasks which exceed the one- sided routine of soldiering. The soldier in the eastern territories is not merely a fighter according to the rules of the art of war but also a bearer of ruthless national ideology and the avenger of bestialities which have been inflicted upon German and racially related nations.

Therefore the soldier must have full understanding for the necessity of a severe but just revenge on subhuman Jewry. The Army has to aim at another purpose, i. e., the annihilation of revolts in hinterland which, as experience proves, have always been caused by Jews.” [9]

Walter von Reichenau’s order, which Hitler called “excellent,” was sent at his command to the OKH (Army High Command), in order to disseminate it to the military, with a request that similar directives be issued.[10]

On November 17, 1941, Colonel-General Hermann Hoth issued the following order: “Every  trace of active or passive resistance or of any kind of machinations by the Bolshevik -Jewish agitators are [sic] to be immediately and pitilessly rooted out. The necessity of severe measures against elements foreign to people and kind must be understood precisely by the soldiers. These circles are the spiritual pillars of Bolshevism, the tablebearers [priests] of its murder organization, the helpers of the partisans. It consists of the same Jewish class of people which have done so much to harm our Fatherland and by its hostile activity…and anti-culture, which promotes anti-German currents in the whole world, and which wants to be the bearer of revenge. Their annihilation is a law of self-preservation. Any soldier criticizing these measures has no memory of the former traitorous activity lasting for years carried on among our own people by Jewish-Marxist elements.”[11]

On November 20, 1941 Field Marshal Erich von Manstein, commander of the 11 Army, circulated his own report: “Since 22 June the German people have been engaged in a life-and-death struggle against the Bolshevist system. This struggle is not being carried on against the Soviet Armed Forces alone in the established form laid down by European rules of warfare.

The Jewish-Bolshevist system must be exterminated once and for all. Never again must it encroach upon our European living space.

The German soldier has therefore not only the task of crushing the military potential of this system. He comes also as the bearer of a racial concept and as the avenger of all the cruelties’ which have been perpetrated on him and on the German people.

The soldier must appreciate the necessity for the harsh punishment of Jewry, the spiritual bearer of the Bolshevist terror. This is also necessary in order to nip in the bud all uprisings which are mostly plotted by Jews.”[12]

It was this “identification” [Jews and Bolshevism] that “caused even a good many of those soldiers who held conservative views and rejected Nazi ideology to put up with the murders of the Einsatzgruppen,” declares Christian Streit, a German historian and expert on the Wehrmacht. General Carl-Heinrich von Stuelpnagel is such a case. Although his opposition to Hitler is well documented, “his army cooperated very closely with the Sonderkommando 4b, and Stuelpnagel himself, in a memorandum of August 1941, called for ‘an increased [propaganda] fight against Bolshevism and above all against…Jewry, which works for its objectives.’” [13]

[1] Benno Müller-Hill, “The Idea of the Final Solution and the Role of Experts,” in The Final Solution: Origins and Implementation, David Cesarani, Ed. (New York: Routledge, 1994), 67-68;  Jürgen Förster, “The Wehrmacht and the war of extermination against the Soviet Union,” Yad Vashem Studies Volume 14,(1981):7–34; Richard Rhodes, Masters of Death: The SS Einsatzgruppen and the Invention of the Holocaust (New York: Alfred A. Knopf, 2002).

[5] Christopher R. Browning, The Origins of the Final Solution: The Evolution of Nazi Jewish Policy, September 1939-March 1942 (Lincoln, Nebraska: University of Nebraska Press, Yad Vashem, 2004),296.In addition to annihilating “Jewish Bolshevism,” and the extensive exploitation of the newly conquered Russian territories for use by the Wehrmacht and Germans back home, meant millions of Soviet citizens and prisoners of war would die of starvation. Hitler called this destructive plan “Control, administer, exploit.” (Förster, “The Wehrmacht and the war of extermination against the Soviet Union,” op.cit.10- 11.

[6] Förster, “The Wehrmacht and the war of extermination against the Soviet Union,” op.cit.10- 11.

[7] Christian Streit, “Wehrmacht, Einsatgruppen, Soviet POWs and Anti-Bolshevism In the Emergence of the Final Solution,” in The Final Solution: Origins and Implementation, David Cesarani, Ed.(London: Routledge,1994),110.

[8] Ibid; Alex Grobman, License to Murder: The Enduring Threat of The Protocols of the Elders of Zion ( Norman, Oklahoma: Balfour Books, 2011).

[10 ] Förster, “The Wehrmacht and the war of extermination against the Soviet Union,” op. cit.28.

Dr. Alex Grobman is the senior resident scholar at the John C. Danforth Society, a member of the Council of Scholars for Peace in the Middle East, and on the advisory board of The National Christian Leadership Conference of Israel (NCLCI). He has an MA and PhD in contemporary Jewish history from The Hebrew University of Jerusalem. He lives in Jerusalem.