Perhaps unbeknown to many Israelis is the shocking fact that only 12 minutes from downtown Jerusalem by light rail, a neighborhood exists within the city’s jurisdiction in which Arab children are being taught that they will one day destroy Israel and replace it with a Palestinian state.

This hate education is on full display in a new video released earlier this month by the Center for Near East Policy Research titled “UNRWA in Jerusalem: Anatomy of Chaos,” including disturbing footage from inside Jerusalem’s Shuafat neighborhood, which serves as a Palestinian refugee camp under the jurisdiction of UNRWA, the United Nations Relief and Works Agency for Palestinian refugees.

UNRWA was established by the U.N. General Assembly in 1949 to support those Arabs who fled or were forced from their homes in Israel’s War of Independence.

David Bedein, head of the Center for Near East Policy Research, told JNS that as a result of the educational curriculum used in Shuafat’s UNRWA schools, “every child is indoctrinated that they should kill the Jews.” But what is unique, says Bedein, is the fact that “this is happening inside Israel.”

He says “there was always an excuse [to incite against Israel] within UNRWA camps outside of Israel or in Gaza, but this is in Israel proper.”

He adds that UNRWA officials running Shuafat are in actuality representatives of the PLO, and that Hamas, Islamic Jihad and other terror groups are also active there.

Bedein says that if “terrorists are operating openly in Shuafat, then they have access to the rest of Jerusalem as well” since they possess Israeli residency cards that grant them complete freedom of movement.

The new video, he says, reveals the human tragedy of life in Shuafat and the detrimental effects on its 30,000 Arab residents, caused by the rampant terror and incitement, crime, drugs and poverty, which are part of daily life in the camp.

It explains that while the residents of Shuafat can opt for Israeli citizenship—with free health insurance and education to improve their living conditions—Bedein states that “UNRWA deliberately keeps them in squalor while blaming Israel and telling them that when you go back to your homes in Ashkelon, you will be fine.”

His statement is in reference to one of the agency’s goals: to instill in the refugees and their descendants a desire to return to the Arab villages that existed before 1948, under the so-called “right of return.”

That “right” is in actuality based on U.N. General Assembly Resolution 194—a nonbinding recommendation passed in December 1948 stating that Arab refugees should be permitted to return to Israel on condition that they are willing to accept Israel’s right to exist and live peacefully with the Jewish state.

For years, that resolution was rejected by the Arabs, as they were unwilling to acknowledge Israel’s existence. Today, Israeli politicians on all sides of the political spectrum recognize that the “right of return,” in reality, is a code phrase alluding to the obliteration of Israel through mass Arab immigration of refugees and their descendants, which would destroy the demographic character of the Jewish state.

In response to the Shuafat video, Asaf Romirowsky—a senior non-resident fellow at the BESA Center (Begin-Sadat Center for Strategic Studies), a fellow at the Middle East Forum and executive director of Scholars for Peace in the Middle East—says that “Shuafat exemplifies the stasis UNRWA has manufactured. What UNRWA should be doing is putting political pressure on countries to integrate Palestinians, who have lived there for decades. This would be a better strategy than continuing to fund an agency solely designed to maintain them in limbo. And yet, UNRWA does the opposite. It perpetuates the Palestinian refugee problem in order to perpetuate itself.”

He explains that its “ever-expanding role in the Palestinian economy can be measured through the number of its local employees. During the mid-1970s, UNRWA had 15,000 employees. It now has more than 30,000 employees—the largest of any United Nations organization, the vast majority of whom are Palestinians.”

‘Perpetuate the conflict by encouraging incitement’

Until 2017, the United States was UNRWA’s largest donor nation, providing more than $364 million of the organization’s $1.2 billion budget. However, last year the Trump administration reduced that number and only gave $60 million. And after calling the agency an “irredeemably flawed operation” and questioning its business model, the Trump administration announced in August that it would cut off funding entirely.

The United States was bothered by the fact that UNRWA, unlike the U.N.’s other refugee agency UNHCR, not only grants refugee status to the refugees from 1948, but also to their descendants; hence, the number of those under its umbrella has ballooned into the millions. Actual refugees from 1948 are estimated to be in the tens of thousands. 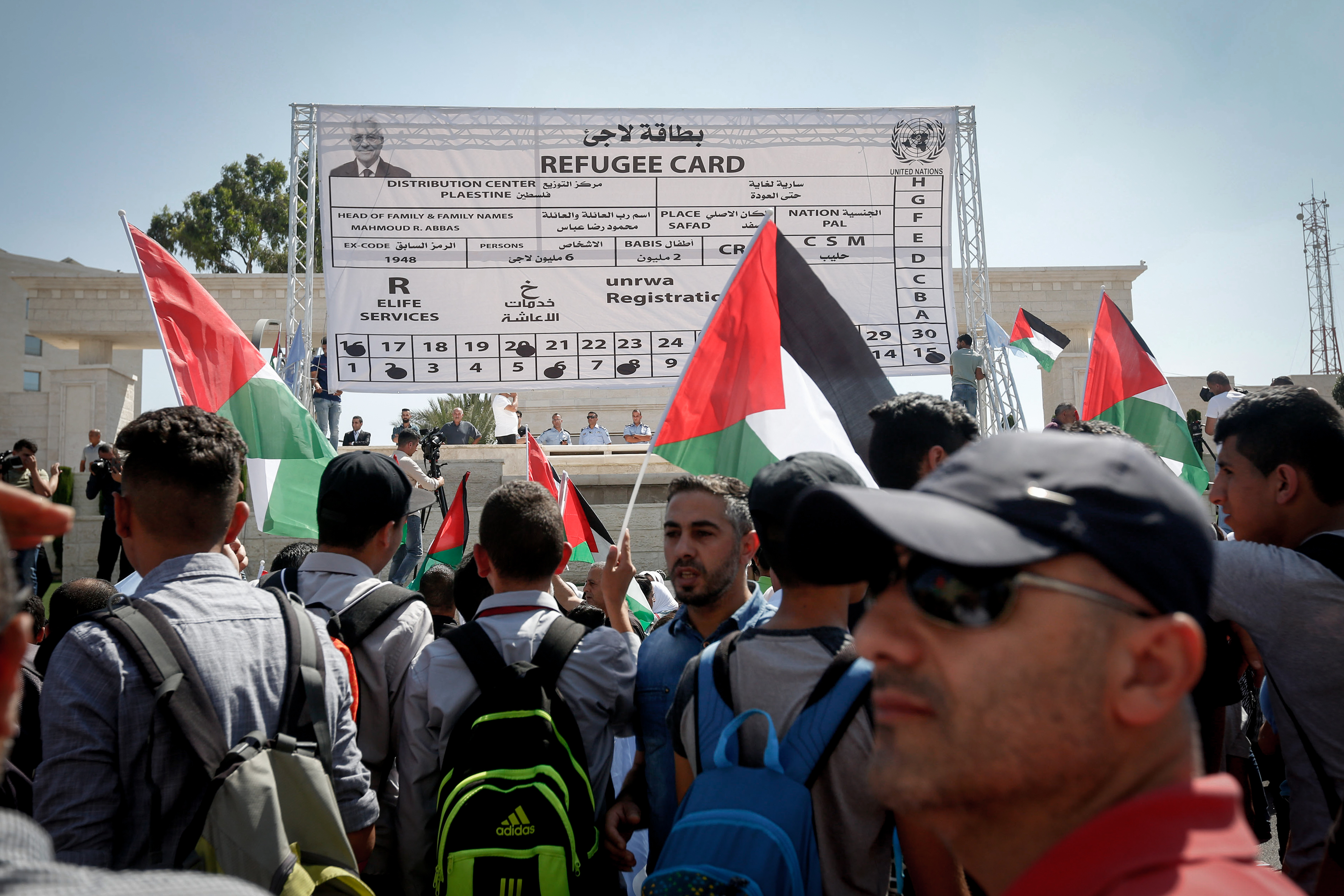 Palestinian protesters wave their national flag in front of a fabricated giant refugee card during a protest against the U.S. decision to cut U.N. funds to Palestinians in the West Bank city of Bethlehem, on Sept. 26, 2018. Credit: Wisam Hashlamoun/Flash90.

Nir Barkat, the mayor of Jerusalem from 2008-2018, is quoted in the video stating what he believes are UNRWA’s true intentions. “UNRWA is a political organization,” says Barkat. “Their goal is to maintain refugee status for Palestinians instead of helping them get on with their lives. I decided to create a plan which is now adopted by the national government to kick UNRWA totally out of the city of Jerusalem.”

To date, no tangible action has been taken by the Israeli government to follow through on Barkat’s plan. But just this month, Israel’s Hadashot TV news reported that Israel’s National Security Council was planning on getting the ball rolling by revoking permits for schools in Jerusalem under UNRWA’s auspices.

The Security Council has yet to confirm that report, while at the same time, an UNRWA spokesman speaking to an Arab news outlet denied that the organization had been given notice.

In response to the Hadashot report, Dr. Hanan Ashrawi, head of the PLO department of culture and information, released a statement blasting both Israel and the Trump administration in their handling of the U.N. agency.

Ashrawi said “the Israeli government’s provocative decision targeting Palestinian refugees in Jerusalem, including closing down and appropriating UNRWA institutions, is an affront to international law and international humanitarian law, as well as the will of the international community, as expressed in United Nations resolutions. This plan is part of a wider Israeli strategy that aims to displace and replace the Palestinian people through ethnic cleansing and other criminal acts in order to entrench its colonial regime.

She added that “in its campaign against Jerusalem, Palestine refugees and UNRWA, Israel is empowered by the U.S. administration’s illegal and unilateral decisions against Palestinian rights. This includes the defunding of UNRWA, as well as other positions aimed at preempting final-status issues and undermining Palestinian national rights. The Trump administration is thus Israel’s partner in this vicious campaign.”

At the same time, current Deputy Mayor of Jerusalem Fleur Hassan-Nahoum says that a separate plan is being initiated to help the residents of Shuafat and throughout the eastern side of the city, despite what she views as UNRWA’s failures.

She tells JNS that “unfortunately, UNRWA is supposed to be a humanitarian organization. However, they only serve to perpetuate the conflict by encouraging incitement instead of focusing on the real needs, which are economic development of this population. They [UNRWA] are creating poor living conditions in which many east[ern] Jerusalemites find themselves in today.”

Hassan-Nahoum explained that the Jerusalem municipality, along with the Jerusalem Affairs Ministry, has a far-reaching plan to develop infrastructure and education in eastern Jerusalem that will accomplish in less time and possibly with fewer resources what UNRWA hasn’t been able to do in decades.

‘This is a political battle’

Former Knesset member Einat Wilf, who recently co-authored the book The War of Return on the subject of the Palestinian refugee issue, tells JNS that she “has been working for the past decade on exposing UNRWA’s true purpose” similarly described by Romirowsky which is, “their destructive role in perpetuating the conflict [with Israel].”

She says that she was happy to hear Barkat’s declaration and was optimistic that “Israel is taking real steps to get [UNRWA] out of Jerusalem.”

Wilf says she believes Jerusalem is the best place to start creating change. “This is a political battle. It’s not about who will provide services, as Israel is the provider of services and healthcare in the city, and as a result, UNRWA can be pushed out. There is no reason to call someone there [in Jerusalem] a refugee.”

After viewing the new video, Wilf adds that “what you see is that the Palestinians are declaring that one day we will “take Palestine from the river to the sea.” The Palestinians know very well that UNRWA is there to give international legitimacy to their maximalist demands, in order to supersede Israel.”

As reported by JNS, this past November Wilf spoke at an Israeli Foreign Ministry-sponsored briefing with more than 50 foreign ambassadors and diplomats present, which was the first time the Israeli government publicly offered alternatives to current policies on Palestinian refugees and their offspring. At the event, she told the dignitaries that ongoing Western support for UNRWA constitutes an obstacle to peace, as it is perceived by the Palestinians as implied support for their demand to “return” to Israel.

While some believe that UNRWA should be shut down entirely, Bedein insists that this strategy is not realistic. “UNRWA was established by the U.N. General Assembly; you can’t get rid of it. But what you can do is try to reform UNRWA by working with the donor countries,” he says.

To that end, his research center has launched the UNRWA Reform Initiative (URI) with a mission, according to the center’s website, “to put an end to the humanitarian crisis facing descendants of Arab refugees from 1948. The agenda of URI is to petition legislators of all donor nations to ask that UNRWA funding be predicated on a change in UNRWA policy.”

The plan calls for donor nations to demand an overhaul of UNRWA’s educational materials that incite violence, in addition to the ceasing of the promotion of the “right of return” through armed struggle, among other proposed reforms.

Bedein says he hopes people will be asking candidates in Israel’s upcoming April 9 elections “what they will be doing about UNRWA, which is in the hands of the PLO, and I’m hoping that the new government will work with all the donor nations to implement the UNRWA Reform Initiative.”

Note: UNRWA’s Jerusalem spokesperson did not respond to repeated requests via phone and email for comment on the story or the video, which was sent to them.