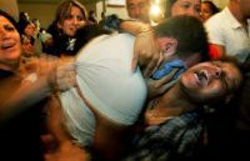 Jerusalem – The Israeli media report that the expanded operation approved by the Israeli security cabinet has been put on hold for the time being, in what has been widely described as a decision by Prime Minister Olmert and Defense Minister Peretz to bow to American pressure.

The Israeli security cabinet approved Israeli military plans to expand the ground offensive under way in southern Lebanon on Wednesday. While three government ministers abstained, none voted against authorizing the military to move northwards to the Litani River and perhaps beyond.

The American government hopes to secure an agreement to deploy a “serious” international force-apparently from NATO – that will serve to beef up UNIFIL and allow the Lebanese army to deploy in southern Lebanon.

This morning it was released for publication that Prime Minister Ehud Olmert and Defense Minister Amir Peretz decided Thursdat night to freeze the expansion of the operation that was approved the previous evening in the security cabinet while they wait to see whether the American effort to make a deal that will enable the Lebanese army to deploy in the south and cease hostilities.

The Americans are now trying to draw up an agreement that will solidify a “serious” European task force, evidently from NATO, that would join the Lebanese army and UNIFIL. The Americans hope that this will convince Israel that the force is a real one and that it will have the ability to control southern Lebanon in place of the IDF troops operating there.

However, the Israeli government is reported to be under tremendous pressure from the Israeli military to allow the army to move ahead with its expanded operation in southern Lebanon, as a means of decreasing the volume of Katyusha rocket fire on Israel and of purging southern Lebanon of its Hizbullah guerrillas. Only that will give Israel the clear victory that it needs to dispel any doubts about its military prowess and to deter future attacks from other quarters.

In IDF ground operations across the Lebanese southern border, 15 reserve soldiers were killed and 38 were wounded, among them five severely and eight moderately in several different incidents.

Israeli ground forces also targeted over 20 structures, including one used to store weaponry, and carried out a number of attacks on infrastructure, in order to minimize the launching of rockets at Israel.

Near the village of A-Taibeh, an IDF reserve soldier was killed, and two more were wounded, one severely and one moderately, during an IDF operation against Hezbollah terrorist infrastructure in the area. Following an initial inquiry, it appears that the incident was caused by friendly fire, in which an Israeli tank mistook the identity of the force.

In the village of Aita Al-Shaeb, four IDF reserve soldiers were killed after an apparent anti-tank missile hit an IDF tank.

In the village of Dbel, nine IDF reserve soldiers were killed, four were severely wounded and seven were moderately wounded after an anti-tank missile hit the structure they were in.

The IDF carried out over 150 aerial attacks against Hizbullah military targets on Wednesday and Thursday, while Hizbullah fired 250 missiles against 42 Israeli civilian targets over the past two days.

Among the targets hit by Israel were six rocket launchers, including the one used to attack Beit Shaan, and structures and commands used by the Hezbollah terrorist organization.

France has proposed a compromise in an effort to reach an agreed-upon resolution concerning Lebanon that will be submitted to the Security Council. The proposal stipulates that Israel would begin to withdraw gradually from southern Lebanon as the

deployment of the Lebanese army begins in coordination with UNIFIL. The proposal was submitted to the other permanent members of the Security Council, but the US has not yet responded to it. UN officials said that no vote can be expected on the proposed resolution before Friday.

American UN Ambassador John Bolton said that some of the disagreements can be resolved, but that the size of the remaining difficulties must not be underestimated. A political source in Jerusalem said this morning that the chances that the US and France will put together a joint resolution in the Security Council are nearly exhausted. The high-ranking official said the gaps are too wide and cannot be bridged. He alsonoted that it looks as though Syria, Iran and Hizbullah are dictating conditions to Lebanese Prime Minister Siniora that have no chance of acceptance.

On Thursday morning, the five permanent members of the UN Security Council discussed the amended proposed resolution presented by the United States for a cease-fire agreement between Israel and Lebanon. The French ambassador expressed reservations to the proposal and reiterated his demand for the IDF’s immediate withdrawal from southern Lebanon. Israeli Ambassador to the UN Danny Gillerman said that the goal is to reach an agreement, but that all options are still open.

Israel has ten bodies of terrorists killed in southern Lebanon and Israeli intelligence believes that they are Iranian Revolutionary Guards who came to fight alongside Hizbullah.

Israeli intelligence sources said no Iranian identity cards were found on the bodies, but they did have documents and tattoos in Persian. Some of them also look like Iranians. Intelligence believes that they were Iranian Revolutionary Guards who trained Hezbollah before the war.

IDF intelligence believes that more Iranians-dozens if not hundreds-are involved in the fighting. Director of Military Intelligence Maj. Gen. Amos Yadlin said a few days ago that the possibility that Iranian soldiers are operating weapons against Israel, or showing Hezbollah how to operate them, cannot be ruled out. Yadlin told Sunday’s cabinet meeting that Iran is passing on intelligence about Israel to Hezbollah in the course of the fighting.

When Prime Minister Ehud Olmert and Defense Minister Amir Peretz visited the Northern Command, they were shown photographs of many Hezbollah corpses held by Israel, as well as captured military equipment and propaganda material.

On Wednesday, Peretz met German Foreign Minister Frank-Walter Steinmeyer and said to him: “We are fighting the war of the free world against terrorism, and we expect the international community to support us. We are fighting against the spearhead commando of Iran, armed with modern, sophisticated weapons, including Russian anti-tank missiles which have been used against the IDF-missiles which we were promised in the past would not reach the hands of Hezbollah.” In the past Israel tried to prevent arms deals between Russia and Syria, charging that weapons sold to Syria were immediately passed on to Hezbollah. Russia denied the allegation and refused to cancel the deals.

It has been released for publication that a 30-year-old resident of the village of Zarzir has been charged with attempting to aid the enemy in time of war. An indictment was submitted in Nazareth District Court against Riyad Mazarim for allegedly having been in intensive contact with a Lebanese contact person through whom he gave Hezbollah classified security information regarding the movements of IDF troops in the north and about places where Katyusha rockets had landed inside Israeli territory in exchange for a promise that he would receive drugs. A career Israeli soldier who serves as a tracker, also from Beit Zarzir, was also arrested in connection with the case for having allegedly served as the contact person between the accused and Hezbollah operatives in Lebanon.

Excerpted from a column by journalist Ben Caspit, in the Maariv newspaper:

This is an existential war. For Israel. It is as crucial as the War of Independence. It is as cruel as the Yom Kippur War. But then there was no television, the newspapers were government-owned, the fallen had no names (and were published long afterwards), the families mourned quietly and the artillery fired in moderation. The security cabinet met yesterday for six hours in an atmosphere of sadness. The list of fallen soldiers increased every hour, and together with this list, the ministers realized just how crucial the time is.

Israel sacrificed one percent of its population in the War of Independence.

That is equivalent to approximately 70,000 casualties in our day. In the Yom Kippur War, Israel lost close to 3,000 soldiers in a shorter period of time. Even during the Six-Day War more than one hundred soldiers were killed per day, after three weeks of a nerve-wracking wait for national annihilation. True, today we are not talking about a war against a proper state or a regular army. Indeed?

A trained and entrenched Iranian division is stationed on the other side, with an endless store of rockets, excellent night-vision shooting techniques, Tandem anti-tank missiles (supplied by Syria) that penetrate any tank or building and a great deal more jihadist motivation. All around us, in the darkness, eyes are gazing at us. Tens of millions of eyes from all over the Arab and Islamic world and the world in general are waiting to see the great, invincible IDF, the strongest army in the Middle East and perhaps anywhere, acknowledge defeat and let a few thousand mujaheddin bring it to its knees. In small meetings that took place yesterday and two days ago, the director of the Mossad and the director of the GSS reiterated: the results of this war will shine light upon Israel’s fate and its future. If there is no clear victory, we are talking about a real, cumulative existential threat to Israel.

When the chief of staff heard about the possibility of hundreds of IDF casualties during a situation assessment two days ago, he said dryly: “So what? It hurts, and it’s terrible, but the alternative is worse.”