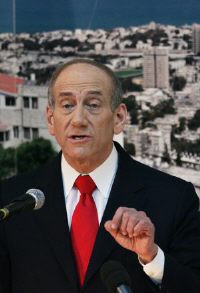 Following pressure from all sides of Israel’s political spectrum, Israeli Prime Minister Ehud Olmert appeared in Israel’s northern city of Haifa, which had been hit by 400 of the more than 4000 missiles fired at Israel’s northern cities during thirty-three days of bombing from the Hezbollah, and announced the formation of three fact-finding blue ribbon panels to determine the causes of Israel’s military and civilian lack of preparedness for the war with Hezbollah. These three committees will be assigned to determine why and how Israel’s defense establishment ignored the clear warnings issued by Israeli deputy minister of defense Ephraim Sneh, back in 2001, that Hezbollah had placed 12,000 missiles in attack formation in Southern Lebanon, following Israel’s sudden withdrawal from the Jewish state’s self-proclaimed “security zone” in Southern Lebanon in May 2000.

These three blue ribbon panels are only empowered to make recommendations to the prime minister, and will not carry the force of law that a formal commission of inquiry which would could obligate sweeping changes and dismissals in the Israeli government and Israeli military, as the Agranat Commission of Inquiry did after the Yom Kippur War. That forced the resignation of Israeli Prime Minister Golda Meir and the dismissal of Israeli Defence Minister Moshe Dayan.

Olmert has come under attack from all parts of the Israeli political spectrum, including prominent members of Olmert’s own coalition in Israel’s Knesset Parliament. The former head of the Israel’s Mossad, coalition Knesset member Danny Yatom, attacked Olmert’s formation of blue ribbon panels, saying that “only a commission of inquiry will see the whole picture”, while left wing Member of Knesset and former Deputy Foreign Minister Yossi Beillin declared that Olmert would go down as Israel’s “Stuttering Prime Minister”. Meanwhile, the non-parliamentary groups that have been demonstrating outside of the Prime Minister’s office – bereaved parents of soldiers killed last month in Lebanon, reservists who feel they were betrayed by the cease fire, and government reformists who claim that Olmert has violated all norms of proper government – announced that they would now organize a hunger strike. It would last until Olmert forms an official commission of investigation that would look into the mishandling of the war in Lebanon, with legal authority to demand removal of public officials from office and possible prosecution of those officials deemed responsible for criminal negligence.

In an interview given to a Lebanese television network, Hezbollah leader Hassan Nasrallah stated Sunday night that he erred in his assessment of the Israeli response to the kidnapping of its soldiers, and did not expect this to lead to war, had he known what Israel’s reaction would be Contrary to past appearances.

Nasrallah appeared less arrogant than usual, and adopted a conciliatory and even apologetic tone. However, Hezbollah’s secretary general stated that his organization would not leave southern Lebanon. He also stated, conversely, that Hezbollah does not intend to clash with the Lebanese army, and at present does not intend to act against Israel.

Nasrallah alleged that Israel was planning a war against Lebanon in any case, irrespective of the kidnapping. An Israeli expert on Iran, Professor Eyal Zisser, chairman of the department of Middle East history at Tel Aviv University, writing in Yediot Ahronot, explains that Nasrallah’s speech demonstrates weakness, but says that the Hezbollah secretary general is still confident of the support of the Shiites in southern Lebanon.

Zisser describes Nasrallah as having come out of the war “battered but not beaten,” and sums up by saying that Nasrallah’s message “is that he needs quiet, understands his error and will employ judgment in the future, but he is not going anywhere.”

On the topic of a prisoner exchange with Israel, Hassan Nasrallah said that talks had already begun over such a deal, and added that Italy and the UN wish to be involved in mediation. Israeli officials, however, denied that any such talks were being held. Family members of the kidnapped soldiers pointed out yesterday that they have no more information now about the fate of the hostages than they had on the day of the kidnapping.

The families of Israel’s three kidnapped soldiers are scheduled to meet with UN Secretary-General Kofi Annan on Wednesday.

“I hope Nasrallah’s statements about the fact that there are negotiations are indeed true, despite the fact that we are not aware of such negotiations”-said Benny Regev, the older brother of kidnapped soldier Eldad Regev, 26, of Kiryat Motzkin.

“We would like to believe what was said. However, I think that in every negotiation it is necessary to know what the goods are, what are we negotiating over. The only way to know what the goods are is for the Red Cross to see the kidnapped soldiers, even on tape. This is the toughest thing for us. As Eldad’s family, we have the same knowledge as we did on the day of the kidnapping: We knew nothing about their fate then, and we still know nothing today.”

Israel’s state comptroller. Micha Lindenstrauss, known as the official government watch dog, has announced that he will investigate evidence aroused that the Israel Authority for Small and Medium Sized Businesses was filled with illegal political appointments to associates of Prime Minister Olmert when he acted as Israel’s Minister of Industry, Trade and Employment between 2001 and2004.

The State Comptroller determined that three senior officials in the authority were hired illegally and without meeting any necessary criteria. In a special report, the state comptroller noted that the sole attribute of the three was apparently their closeness to the Likud, which at the time was Olmert’s political party.

The comptroller wrote in his stinging report that the Authority for Small and Medium Sized Businesses served as a convenient path for Olmert to bypass rules and procedures and ignored the norms of public justice. Authority officials commented that they had fixed the problem, and now the recruitment of employees is done according to proper procedures.

The Prime Minister’s Office issued a response to the state comptroller’s report saying, among other things, that management was not involved in the process of hiring the three senior employees, except for an opinion that the ministry’s director general was asked to give about one of them.

UN Secretary-General Kofi Annan has informed Prime Minister Olmert that the multi-national force will deploy in southern Lebanon within about a week, led by France and Italy. He said that that he had also asked other countries to join the force. Prime Minister Olmert said during their conversation that the most important thing was the immediate release of the kidnapped soldiers. For whatever reason, Olmert made no mention of the other Israeli demand, that the Hezbollah be disarmed. Olmert and Annan are due to meet in Jerusalem on Wednesday.

Yesterday morning, Israel Defense Minister Peretz held a meeting to discuss operational responses to the threat of short and medium range rockets. Officials involved in development in the defense establishment presented to the minister the technological possibilities for intercepting rockets with a range of up to 200 kilometers. The defense minister instructed that the issue be made top priority, and that alternatives be presented to him as soon as possible.

The Israeli army blew up a huge Hezbollah bunker yesterday, which was discovered 400 meters north of the border fence with Israel, close to Rosh Hanikra, right under the nose of a UN outpost. According to Golani Brigade Deputy Commander Lt. Col. Ghassan Alyan, this was a bunker covering an area of two square kilometers with firing positions made of concrete, phone lines and logistic aids for Hezbollah. “Dozens of battle positions were built inside the pit, divided into two-three rooms each. In each position there were showers, bathrooms, air conditioning and escape hatches,” described Lt. Col. Alyan.

According to the officer, the bunkers could not be detected or destroyed from the air. “They enabled the terrorists to come out of the bunkers, fire mortars at Israel and re-enter the bunkers-without being discovered by anyone. Even if we had bombed them from above, they would have survived the bombing, since these are huge bunkers, dug deep underground and coated with concrete,” said the deputy commander of the Israel’s elite Golani Brigade.