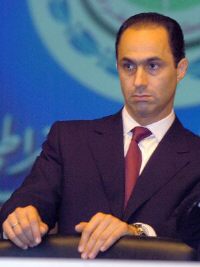 Egypt, which has played a key role in helping to smuggle advanced weaponry to Palestinian terrorist groups from Gaza that continue to conduct missile attacks into Israel, now plans to revive its nuclear energy project.

While there is concern in Israel over the prospect of an Egypt with nuclear capability, no one in Israeli officialdom is ready to express that concern on the record.

However, the authoritative Middle East News Line has confirmed that the regime of President Hosni Mubarak is now ready to acquire nuclear reactors. Indeed, the Egyptian Energy Ministry intends to discuss nuclear energy facilities and technology from a range of countries, including China and Russia.

In an address to the ruling National Democratic Party on Tuesday, the 42-year-old Gamal urged his father to examine a proposal to develop nuclear energy. In 2004, Egypt was said to have abandoned its nuclear energy project and shelved plans to construct up to eight reactors. Under the plan, each reactor would have a capacity of 1,800 megawatts.

“We will continue using our natural energy resources, but we should conserve these resources for our future generations,” Gamal said.

In Vienna, the International Atomic Energy Agency has been examining a proposal to restrict the supply of nuclear reactor fuel. Under the proposal offered by Germany, Russia and the United States, the IAEA would establish nuclear fuel centers that would be the sole suppliers for civilian reactors, such as those planned by Iran.

In March, however, the International Atomic Energy Agency determined that Egypt conducted secret nuclear activities at a facility about 40 kilometers north of Cairo. An IAEA report said Egypt carried out nuclear research from 1960 to 2000, but probably did not conduct uranium enrichment.

“We will not accept initiatives made abroad,” Gamal said. “Egypt is a big country and plays a leading role and will continue to do that.”

Officials said the NDP has been discussing the renewal of Egypt’s nuclear program since May 2006. They said Gamal, the party’s deputy secretary-general, and his colleagues have been discussing the option of producing nuclear fuel to avoid dependency on foreign suppliers. Virtually all Cabinet ministers are NDP members.

On Sept. 11, an Egyptian strategist urged Arab League members to invest in a regional civilian nuclear program. During a two-day nuclear conference in the Bahraini capital of Manama, the strategist pointed to Iran’s uranium enrichment program, which he said could not be ignored by Arab neighbors. The conference adopted the Egyptian recommendation.

“We can’t just sit and look from the outside as these developments take place,” Mohammed Al Said Idris, a consultant at the Egyptian state-owned Al Ahram Center for Strategic Studies, said.

Officials said China could be a leading supplier of nuclear technology to Egypt. Over the last two years, they said, Beijing has expanded trade links and plans to invest in Egypt’s energy sector. Between 2002 and 2005, trade between the two countries doubled to $2.2 billion.

“We are planning to bring our relationship with China to a new level,” Egyptian Trade Minister Rashid Mohammed Rashid, who led a delegation to China in early September, said. “If you look at the big picture, everybody in the world is aware there is a paradigm shift in the world economy at the moment.”

Despite repeated denials, Gamal has been regarded as the heir-apparent to the president. Over the last four years, he has risen to a leadership position in the NDP and in April was sent on a secret mission to the United States, where he met President George Bush and Vice President Dick Cheney.

“There’s an impressive group of younger Egyptians, the trade minister and some of the economic people that understand the promise and the difficulties of democracy,” Bush, referring to Gamal, told The Wall Street Journal.

Egypt has been receiving about $2 billion a year in U.S. military and economic aid. The Bush administration, under congressional pressure, has withheld Egypt’s request for new F-16s, the Joint Direct Attack Munition and other advanced U.S. systems.

In 2005, Mubarak was elected to another six-year term. But opposition leaders assess that the 78-year-old president would step down in 2007 and ensure that his son takes over.

Opposition sources said the current three-day NDP conference would decide to amend Egypt’s constitution. They said the proposed revisions were designed to facilitate the election of Gamal in a referendum in mid-2007.

“The main objective of the NDP is to put Gamal Mubarak on the seat of power, and this conference will ensure that happens,” opposition parliamentarian Talaat Sadat, nephew of the late President Anwar Sadat.