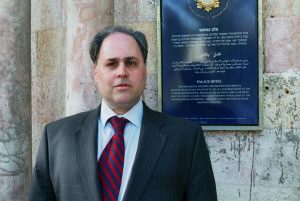 Jerusalem – The 27th day of Nisan year in the Hebrew calendar marks the day when the Warsaw Ghetto uprising began against the Nazis in 1943.

It was therefore selected as Holocaust Remembrance and Heroism Day in Israel – the day on which Israel would remember the mass murder of Jews in World War II – not only as a day of mourning an remorse, but also as a day to remember those who fought back against the Nazis and their allies.

To paraphrase the questions asked on Passover two weeks ago, people often ask why this persecution of Jews in Christian countries was different than other persecutions?

After all, Jews had suffered persecution in Christian lands over the centuries.

This time, Nazis incorporated the Muslim idea of Jihad, which involved the impulse to total destruction and complete annihilation in the spirit of a Holy War.

The Muslim cleric who inspired Adolf Hitler with the idea of Jihad was none other than the Mufti of Jerusalem, Haj Amin El Husseini. He did not want masses of exiled Jews to wind up in the land of Israel, which he claimed as a future Arab Palestine, devoid of Jews.

Indeed, in 1936, the Mufti welcomed Hitler’s deputy, Adolf Eichmann, to his office at the Supreme Islamic Council based at the Palace Hotel in the center of Jerusalem, where Eichmann kept meticulous records of his meetings with the Mufti, where the Palestinian Arab leader of that generation taught Eichmann about the philosophy of Jihad.

Journalist Maurice Pearlman, who reviewed the records of Eichmann’s meetings with the Mufti at the trials for Nazi leader in Nuremberg, wrote a book entitled The Mufti Of?Jerusalem, published in 1947, in which Pearlman noted that the Mufti instructed Eichmann that the way in which the Nazis could best persecute the Jews was to do so slowly and in stages, so as to catch them unaware of the next stage of persecution.

Eichmann offered reciprocal hospitality for the Mufti in Nazi Germany. In 1939, with the outbreak of World War II, the British government, then presiding over the mandatory government in Palestine, expelled the Mufti, who chose to travel to fascist Italy and then to Berlin, where he remained for the remainder of World War II. Hitler provided the Mufti with a radio station in Berlin from where he propagated the Nazi message in the Arabic language, and the Mufti was assigned the task of organizing a Muslim contingent of the Nazi murder machine which killed Jews throughout Yugoslavia.

The Mufti obtained Hitler’s assurance in November 1941 that after dealing with the Jews of Europe, Hitler would treat the Jews of the Middle East similarly. Husseini promised the support of the Arabs for the Nazi war effort. In Berlin, Husseini used the money confiscated from Jewish victims to finance pro-Nazi activities in the Middle East and to raise 20,000 Muslim troops in Bosnia, in the Hanjar S.S. Waffen, who murdered tens of thousands of Serbs and Jews in the Balkans and served as police auxiliary in Hungary.

Heinreich Himmler, the administrator of the Nazi death machine, brought the Mufti on numerous tours of the death camps. Most recently, a book was written about the ZunderKommandos, whose task it was to remove the dead Jews from the crematoria.

One of those ZunderKommandos remarked in an interview with a researcher that he witnessed a man with a turban whom the Nazi camp commandant brought to witness the gassing of he Jews and the removal of the bodies from the gas chambers, the stripping of their valuables and the burning of their remains. The Nazi told the ZunderKommando that this was the Mufti of Jerusalem. During the final months of the war, the Mufti actually lived in Hitler’s bunker. Although arrested by the French army, the Mufti was somehow able to escape to Cairo. The Mufti was later sentenced to death in absentia in Yugoslavia.

After Adolf Eichmann was abducted and brought to Jerusalem for trial in 1961, Golda Meir, then the foreign minister of Israel, demanded that the Mufti also be brought to trial for the same crime of genocide against the Jewish people.

The Mufti’s legacy did not stop when he escaped the defeated Nazi Germany. Upon arrival in Cairo, he resumed the role that he had left, as the spiritual leader – in exile – of the Palestinian Arab community. The Mufti played a key role in the decision of the Arab League to reject the U.N. partition plan in 1947 to declare a Jewish and an Arab state in Palestine. Instead, the Mufti rallied Arabs throughout the Arab world to apply Hitler’s concept of the final solution to wipe out the Jews in their nascent state of Israel.

The Mufti raised a new generation of young Palestinian Arabs to form a new Muslim brotherhood to take up the cause of a lifelong effort to eradicate the Jewish state. The Mufti also became a surrogate father to a young man who took upon the name Yassir Arafat, a name given to him by the Mufti in memory of Yasser bin Ammar, a celebrated Muslim warrior and companion of the prophet. The relationship between the Mufti and Arafat was related by Arafat’s brother Fatchi to the HaAretz newspaper in December 1996.

The Mufti died in July 1974, one month after the PLO National Council met and ratified the Mufti’s “strategy of stages” – to conquer Palestine in phases – as the strategic methodology that the PLO uses to this day.

With the outbreak of the Palestinian Arab rebellion known as the Second Intifada in October 2000, a theme that repeated itself over and over on the official Palestinian television station overseen by Arafat was the use of an academic lecture, broken up by martial music, to highlight the comparison between Yasser Arafat and the late Grand Mufti Haj Amin al-Husseini. Listeners were told how Husseini opposed the Jews (al-Yahoud) in Jerusalem and how he stood up to then-world power Great Britain, as a model for Arafat’s struggle in the modern era.

The Holocaust Museum In D.C. Ignores The Mufti

Boston attorney Charles Morse has made an issue of the fact that the U.S. Holocaust Memorial Museum simply ignores any mention of the Arab or Muslim role in the Holocaust and the link between Nazism and current Islamic extremism.

While the museum has programs on the role of Christianity in promoting anti-Semitism – yet nothing on Islam.

In contrast, there are 33 large files on the Mufti in the Yad VaShem Holocaust memorial in Jerusalem.

Walter Reich, who served as the director of the U.S. Holocaust Museum from 1995 to 1998, was quoted in the Washington Times on Feb. 9, 2006 as saying that “a focus on Arab and Muslim anti-Semitism and Holocaust denial at the Holocaust museum… would be, I believe, appropriately within the museum’s mandate. Indeed, it would be strange if the museum did not focus on such anti-Semitism and Holocaust denial, given the museum’s devotion not only to the Holocaust but also to contemporary genocides and given the prevalence in contemporary Arab rhetoric of not only the kind of anti-Semitism that helped lead to the Holocaust but also the calls for genocide that are aimed at the Jews of Israel.”

Reich lost his position at the U.S. Holocaust museum when he objected to the overture of President Clinton’s Middle East advisor, Dennis Ross, who suggested that Yassir Arafat, the protégé of the Mufti, be brought as an honored guest to the U.S. Holocaust Museum.

A historic footnote: Following the recent passing of Nazi hunter Simon Wiesenthal, one of the files discovered in Wiesenthal’s library contains a record of Wiesenthal’s pursuit of the Mufti of Jerusalem in the late 1940s after the Mufti escaped punishment for his war crimes. That file is now being translated and edited for publication.