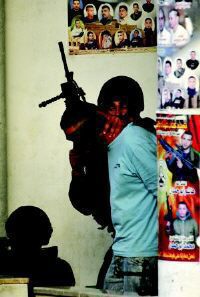 Jerusalem – Israeli security officials have confirmed to the Middle East Newsline that Palestinian armed forces have been extending the range of their missiles to achieve a missile range of 25 kilometers, which would enable Palestinian strikes against major cities in Israel in an effort to strike much of southern Israel. Hamas and Islamic Jihad were improving their indigenous missiles in cooperation with Iran and Hezbollah.

On Wednesday, the Israel Defense Forces (IDF) and Israel’s General Security Services (GSS) arrested 33 top Hamas leaders in Judea and Samaria. Among them: Education Minister Dr. Nasser al-Din Shaer, three MPs, the mayor of Nablus and his deputy. Defense Minister Amir Peretz explained that the arrests were meant to send a message to the organization that fires Kassams at Israel.

The IDF said Thursday morning that 10 Hamas members were arrested in the Nablus area, five in Kalkilya, four in the Ramallah area, four in the Maccabim area, four in Bethlehem and six in Hebron. Among them were also the mayors of Kalkilya, Bidiya, el-Bireh, a high-ranking director in the Interior Ministry, the wakf leader in Nablus and the director general of the Public Works Department in the region.

In addition, IDF troops closed Hamas institutions Wednesday night in Jenin, Nablus, Ramallah, Bethlehem and el-Azariya. Hamas communication stations in Nablus and Kalkilya were also closed, which are suspected of inciting and calling for terror against Israel.

Defense Minister Amir Peretz said Thursday morning in an interview to Israel Army Radio that the arrests are reversible. “The arrest of these Hamas members is a message to the military organizations that we demand that the fire stop. We were as restrained as possible and we will do anything that can have an effect on the situation, not necessarily actions that will lead to killing and violence.”

In his daily United States State Department briefing on Thursday, U.S. State Department spokesman Tom Casey said that the U.S. is “concerned” by Israel’s arrest of 33 senior members of Hamas overnight. His announcement was echoed by the U.S. envoy to the U.N., Michael Williams. While Hamas is a terrorist organization, Casey said, the arrest of Palestinian