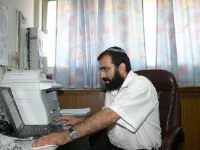 Jerusalem – Rabbi Eli Edrei is a school principal who holds a normal resume and an abnormal job description.

The dry statistics of what has happened to Amit graduates during Edrei’s term of office shows that the Amit schools have doubled in size and that the amount of high school graduates who pass matriculation has risen from 18 percent to 77 percent.

That accomplishment resonates because, over the past seven years, more than 5,000 rockets have been fired from Gaza at Sderot and the Western Negev, with each rocket leaving its own distinct sound and impression – the “red color” alert and the sound of the impact, no matter where it explodes. And over the school year, over 650 rocket attacks soared into the area – an average of more than twice a day. And everyone knows that their home could have been a target.

The Gaza rocket attacks affect the students in a very direct way. A rocket seared the roof of the Ulpana six years ago, when Edrei was in only his second year as the Amit principal. While the rocket hit after school hours, the gaping hole in the roof was a reminder to all the students of just how vulnerable they are.

Edrei describes the challenge that he faces to help Amit students cope with the inner religious crises that they face as religious Jews, when they ask questions of why God is allowing this to happen and whether God hears their prayers. Ella Abukasis, an Amit graduate and youth movement counselor from Sderot, was killed in January 2005 as she shielded her 11-year-old brother during a Gaza rocket attack. Ella’s sister learns in the Amit school system and remains a living reminder to all the children in the school that these rockets can indeed be lethal.

Edrei mentions that his students ask their rabbis in school about why God did not protect Ella Abukasis, who was only trying to protect her brother.

“Part of our tough assignment is to teach the youngsters that God is not an ATM machine where you press a button and out comes an automatic answer.”

Then again, Edrei points out, “there have been moments when the Amit students have had reasons to thank God for small miracles and to recognize God’s presence.”

That is because over the past year at least half a dozen Amit students experienced direct Gaza rocket hits on the homes in which no one in their homes was injured. The emotional scars remain evident, however.

Adriana Katz, the psychiatrist who runs mental health services in Sderot, says that her treatment center now handles more than 3,600 anxiety victims of all ages. In a city of 22,000 residents, that means that a sizeable portion of the community is in therapy, including a high percentage of the Amit students.

In December, just before Hanukkah, two ninth-grade students were hit in the legs by rocket shrapnel. One of the boys had part of his foot amputated as a result and has been hospitalized at Tel HaShomer medical center ever since. Another boy who was badly hurt had led the students in their daily prayers and left Sderot with his family after being hit. Edrei mentions that the response of the children was to ask why this would happen to a boy who sang the psalms loudest and with the greatest passion.

This was not an easy question for Edrei and his staff to deal with.

This past year, and in the coming school year, Edrei has been coping with an even greater challenge: how to keep the students from leaving Sderot. One Friday last November, Edrei stood by buses that offered to take families out of Sderot to hotels where Shabbat observance would be nonexistent. He pleaded with his students and their families to stay home, to pray hard and to observe Shabbat rather than succumb to the offer of a luxury hotel where they would compromise the religious values that they learn in the Amit schools.

Yet the issue of the unprotected classrooms remains high on the agenda of concern.

Last February, the Sderot Parents and Teachers Association sued the office of the prime minister of Israel because of his order to limit protections for children in Sderot and the Western Negev to the age of eight, after which the children are expected to run for protection during the 15-second warning from the warning siren And when it’s cloudy or rainy, the siren can sometimes miss an incoming rocket. That was the case on May 22, when a rocket hit the downtown area of Sderot in the early part of a foggy evening, and a rocket hit a car with no siren warning, killing the driver.

On May 28, the Israel High Court of Justice issued an order to Prime Minister Ehud Olmert to allocate funds to protect all classrooms in Sderot. However, only on July 19 did Olmert announce that he would comply with the order. On July 22, Olmert downplayed the significance of protecting classrooms, saying that “no one has been killed in any public institution of Sderot.” At 6 p.m. that evening, a rocket hit a classroom at the Sapir college in Sderot, sending one student to the hospital.

Edrei feels that he is professionally equipped to handle the new school year at the Amit schools. He now has an emergency staff at his disposal and works with leading trauma experts from Jerusalem. He mentions that while you can feel “fear in the air,” all of his teachers informed him that they intend to return to Amit for the coming school year. “They are heroes of Israel,” says Edrei.

Indeed, it was the joint decision of Edrei, the teachers and the Amit high school student association not to move the exams from Sderot.

As you leave Edrei’s office, you see the pictures on the wall in corridor: Pictures of Amit students visiting concentration camps.

Edrei points to the questions and says that, without making any comparison between the ghettoes and death camps in Europe, these are the very questions posed by the Amit students of Sderot today, who feel that the world around them – even in Israel – has no idea as to what they are going through and that there is no expectation that the people or army of Israel will come to their rescue.