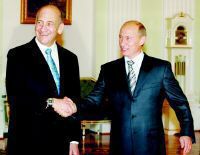 Jerusalem – Israeli Prime Minister Ehud Olmert went to the Kremlin on Thursday with an unequivocal message to the Russian president: In a situation in which Iran has nuclear weapons and Syria has sophisticated weapons from Russia, Israel will have to weigh its actions against these threats.

The issues that trouble the prime minister, raised on Thursday in his meeting in Moscow, have to do, first and foremost, with Russia’s involvement in building Iran’s nuclear program. Top Russian officials try to persuade their Israeli counterparts that the entire Iranian nuclear program is under close Russian supervision. Vladimir Putin even declared in the past that Iran’s having nuclear weapons would endanger his country and hinted to Ehud Olmert that Russia would not supply Iran with the fuel that would let it produce such weapons. Mr. Putin often tells Israeli officials that he feels a special commitment toward the over one million new immigrants from the former Soviet Union who moved to Israel and that he would do nothing to endanger them. Israel, Mr. Olmert was expected to tell Mr. Putin on Thursday, will not accept Iran’s having nuclear weapons – and will weigh all its options to remove this threat.

Mr. Putin likely told Mr. Olmert his impressions from the talks he held this week with the Iranian leadership in Tehran. However, it was not expected the Russian president will give the prime minister any message from Iranian President Mahmoud Ahmadinejad: It appears impossible to bridge the abyss gaping between Israel and Iran at this stage.

Another matter worrying Mr. Olmert is the new arms deal that Russia is believed about to sign with the Syrians, using Iranian funding. Among other things, Mr. Putin plans to provide Syria with Russian surface-to-air missiles and anti-aircraft missiles that it has never before sold to another country. In an attempt to make clear to Russia the dangerous implications of these arms deals, Israel showed Kremlin leaders proof in recent months that Russian arms sold to Syria were given to Hezbollah.

In the two hours that the Kremlin allocated for the meeting, Mr. Olmert most likely expressed his opposition to Russia’s attempts to mediate between Fatah and Hamas with the goal of establishing a Palestinian unity government.

The trip to Moscow was arranged eight days ago in a phone call between Mr. Olmert and Mr. Putin. The two leaders agreed to meet after Putin returned from his historic visit to Iran – the first visit of a Russian leader there since 1943.

The prime minister is careful to talk to the Russian president by phone at least once a month and attributes supreme importance to the intimate dialogue which he believes he has managed to create with Mr. Putin. The Russian president is trying to show the world that Russia is again a superpower, equal to the United States, and there is almost no international issue in which Mr. Putin does not display an independent approach, usually an approach that goes against the Americans. That was also the background to his trip to Iran. “Russia is a major player in the world arena,” said a high-ranking official close to the prime minister. “That explains the supreme importance of holding a dialogue with him.”

The open dialogue between the leaders of Israel and Russia is not something to be taken for granted: Just 20 years ago, any chance meeting between an Israeli official and a Russian official in the U.N. corridors in New York would garner large headlines. Israel hopes that the close ties between the countries today will make it possible for Mr. Olmert to persuade Mr. Putin to take Israel’s existential fears of a nuclear Iran into account.

However, a senior political source in the prime minister’s office said that it is doubtful whether Mr. Olmert will succeed in persuading Mr. Putin to change his position in connection with the Iranian threat: “The Russian positions in this connection are not anti-Israeli, but stem from Russia’s desire to look like a superpower and to act against American interests.”

In a statement issued by the Israeli government, “Prime Minister Ehud Olmert and Russian President Vladimir Putin this evening (Thursday), 18.10.07, concluded their private, three-hour meeting in Moscow…. The two men discussed a series of regional and bilateral issues including ways in which Russia can serve as a stabilizing factor in the region, while giving due weight to Israel’s security interests. Russian President Putin made it clear that his country views Israel’s security interests as a significant component in its regional policies….”

Meanwhile, IRNA, the Iranian government news agency, reported that Mr. Putin relayed to spiritual leader Ali Khamenei a secret proposal in connection with Iran’s nuclear program. Iranian officials say that Mr. Putin proposed to Iran that it suspend its uranium enrichment in exchange for a timeout in the sanctions.