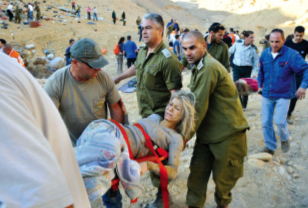 This year has marked the first year in Israel’s history when no visas were required of tourists who wanted to visit the Jewish state from Russia.

As a result, at least 300,000 Russian tourists have flown into the southern Israeli port city of Eilat over the past year, making Eilat one of the greatest attractions in the world for Russian tourists.

In that context, travel agents from throughout Russia gathered this week in Eilat to convene a conference, in cooperation with the Israel Ministry of Tourism. The conference aimed to plan vacation packages for Russian- speaking tourists who want to visit southern Israel.

On Monday afternoon, 49 Russian-speaking travel agents and tour operators landed at the Ovda airport just north of Eilat. These tourists flew to Israel on a charter flight operated by the Russia company from St. Petersburg, landed in Ovda and departed in two buses in the direction of Eilat.

Around about 3 p.m. local time yesterday, one of those buses plunged down a ravine about two miles north of Eilat.

Twenty-six of the Russian bus passengers were killed instantly, and the injured were evacuated to the Yoseftal, Barzilai and Soroka hospitals in southern Israel.

Thirty-three more passengers were injured, 25 of them seriously.

The situation room operated in full cooperation with the Foreign Ministry and with the Russian Ambassador to Israel and the Israel Embassy in Moscow.

“Israel deals with road accidents on a daily basis and, to our sorrow, no week goes by without Israelis and tourists, pedestrians, drivers and passengers, being killed and injured. The number of those killed and injured is high and scarcely conceivable. Even in the shadow of this sad chronicle, today’s accident is exceptional in its severity. It obligates us, especially during the week in which we mark the issue of road safety, to reconsider the culture of driving in Israel, mutual responsibility on the roads and the need to specially train drivers who transport large numbers of people.”

The Israel Ministry of Transportation said a verbal argument between the two bus drivers concerning the “right of way” caused the crash. The driver of the fatal bus, who was only slightly injured in the crash, has been convicted of 22 moving violations. Why he was still a driver on the road will be the subject of debate in the days to come.

Twenty-four fatalities in one crash is the highest figure in Israeli motor vehicle accident history.