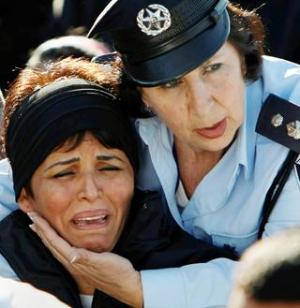 Two Jewish Israeli traffic policemen, identified as David Rabinowitz and Yehezkel Ramzamkar, apparently stopped to help a driver who pretended to be stuck with a flat tire, were shot to death in the head at point-blank range by Arab terrorists on Sunday night.

A group calling itself the Imad Mughniyeh Group, named for the Hezbollah terror mastermind who was killed in Syria last year, claimed responsibility for the attack yesterday.

The terror attack took place Sunday night close to 8:30 p.m., just south of Masua junction in the Jordan Valley, near the ancient city of Jericho.

Jericho is controlled by the Palestinian Authority (PA) and hosts the training base for its security services, which are now being assisted by American military advisers.

A taxi driver who passed by noticed a police car standing at the side of the road and thought it had been involved in a car accident. He alerted the security forces,

who were astounded to find the two police officers shot in the head in their squad car.

The policemen were in their seats, with their handguns in their holsters, the car engine was running and the driver’s foot was still on the gas pedal. The gearshift was in reverse. At this stage, the policemen were still alive, but when medics arrived at the scene

one was no longer alive and the other could not be saved.

In a search conducted in the squad car, a shell casing was found, apparently from a 9-mm. handgun. No bullet marks were found on the car itself, and the windows were intact.

Near the squad car, bolts and a car jack belonging to another vehicle were found, which led to the later confirmed conclusion the police officers had fallen victim to a trap set by terrorists who had staged a car malfunction.

It is believed the terrorist shooter succeeded in inserting his handgun into the squad car and shooting the policemen at point blank range.

The two police officers who were murdered were known and held in high regard in the Jordan Valley.

Commander of the Samaria and Judea District Police’s traffic division Dep. Cmdr. Doron Yisraeli, who was their direct commander, related: “These were well-trained, professional policemen. They had served in the area for a number of years and knew all the dangers.”

Jewish Israeli residents of the area responded to the Arab terror attack yesterday with anger.

“It was clear to any reasonable person that the policy of removing roadblocks and releasing terrorists, which the outgoing government continued to impose on the IDF (Israel Defense Forces) until the last days of its term, would exact a heavy price,” said Judea and Samaria Council Chairman Danny Dayan. “Unfortunately, the government did not heed the repeated warnings-and this is the result.”

Uri Ariel, a National Union Party Knesset member, called the attack “an immediate illustration of the bloody price of removing roadblocks in the Nablus area.” He pledged the new Netanyahu-led government would not allow future such attacks.

“Even if it becomes apparent that this was a terror attack, we have to rally ourselves and return to normal routine,” summed up Jordan Valley Regional Council Chairman David Elhayani. “We should let our security forces do their job and investigate the incident, and I am sure that in the end they will capture the terrorists.”