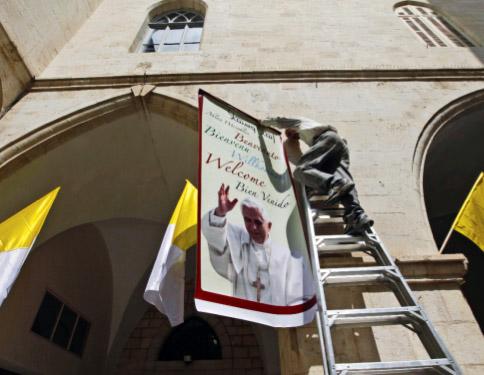 As a scholar of history, Rabbi Hertzberg had conducted scholarly research concerning the fate of Polish Jewry during the war and the activity of the Catholic Church in Poland during those years.

“In the weekly reports of the Polish bishops filed to the Vatican during the war, there is not a single report on record that relates to the fate of the Jews,” said Rabbi Hertzberg.

Rabbi Hertzberg said the Vatican denied him access to the 11 volumes of records that the Vatican itself maintained concerning the mass murder of 3 million Jews of Poland during World War II when he asked to review them.

On a personal note, Rabbi Hertzberg said he and Pope John Paul II were the same age, born only a few miles from one another in Poland.

While Rabbi Hertzberg was brought up in the U.S., 37 of his close relatives remained in Poland and were murdered during World War II.

Rabbi Hertzberg said Pope John Paul II would not discuss what he did during the war, when he was a young priest in Poland, except to tell TV interviewer Marek Halter: “I lived too quiet a life.”

Rabbi Hertzberg asked the Pope some difficult, public questions during his visit to Jerusalem: “What were his activities during the war? What did the future pontiff know of what was happening to the Jews of Poland?”

“This pope will go to his death, wishing that he had behaved differently during the war,” Rabbi Hertzberg said at the end of his 2000 press conference.

“After my press conference in Jerusalem, Pope John Paul II said that, indeed, he “did not do what he could have done to save the Jews,” the rabbi said.

Rabbi Hertzberg said he received a request from the Vatican in the name of the Pope to request that his critical critique be included in the Vatican volume to be issued in honor of Pope John Paul II.

“I readily agreed to that request,” Rabbi Hertzberg said, with some emotion.