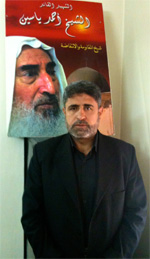 In October of 2009, I had the opportunity to sit down with Talal Nasser, a senior Hamas official in the Hamas office in Damascus, Syria. Hamas is designated by the West as a terrorist organization and is viewed as a resistance movement in the Arab world. The most recent and significant clash with Israel occurred in the winter of 2008- 2009 and was called Operation Cast Lead by the Israelis and was known as the Gaza massacre in the Arab world. The following is an interview that attempts to shed light on the purposes, philosophy and goals of Hamas as a political and military organization.

What is your role in Hamas?
I am one of the members in Hamas. I am responsible for PR and just recently I gained a new position in the political decisions making area of Hamas. I am currently wanted by the Israeli forces because I am one of the founders of the al-Qassam Brigade – the military wing of Hamas.

Is your life in danger from the Israelis?
I have security, but I am not afraid. Why? Because we have a superior target – or goal which is to kick the occupiers out from the land. We work for our people and for our interests.

What is the strength of Hamas after the latest war with Israel that ended in January 2009?
The movement is strong and was strong even before the Israeli Holocaust in Gaza.

Our popularity is growing – as a movement because of the martyrs who gave their lives for this cause.

Hamas showed a good example for a resistance movement – in how they handled everything from their vision to distributing food to those in need during the war According to a Swedish NGO, Hamas’s popularity is now at 82.2% within the Palestinian West Bank.

How many people were killed in Gaza, including civilians?
We consider all people killed in this war were from Hamas – children, women and men. But as the real fighters go, 89 fighters were killed. This does not include the number of policemen and civilians.

Do you believe that you have impacted Israel’s position in what you consider to be occupied territory? Has significant pain been inflicted upon Israel?
Israel is a criminal state and they never respect any international laws. If we don’t make any pain against them, they won’t accept a cease-fire. An Israeli writer said that what Hamas’s army did, no other Arab army could do or has done. And the Israelis were afraid that Hamas could launch rockets against Tel Aviv. And they were afraid that we could kidnap more soldiers – and we could and we did, but the Israeli’s bombed our position and killed their own soldiers.

So what did we did in the Gaza war was create the situation where even our enemies would have to respect us.

My sources inside Gaza say that there are gangs that have risen up and that are challenging the power of Hamas. What is your response to that?
There is no mafia and no gangs – but there are other Palestinian groups that don’t believe as Hamas believes. There were gangs, but Hamas has finished them off.

You are quoted in the Israeli publication Haaretz as asking Palestinians to rise up against the Palestinian Authority and President Mahmoud Abbas. What is the purpose of this challenge?
Abbas has now become a symbol of a liar and a traitor to the Palestinians people in the whole Muslim world. For example, Abbas said that we have no prisoners of conscience in the West Bank and then after two or three days, he said we’re going to release all of those political prisoners.

Abbas also tried to make it sound like the Hamas leaders ran away during the war. But they didn’t. Abbas is not acting like a president of the Palestinian people. He is a mouthpiece of the Fatah movement. He is definitely a traitor. I have received many messages on my mobile begging me to not put my hand with the dirty hand Abbas.

Could Hamas become the legitimate ruler of all Palestinians, including the West Bank?
Abbas stays in power only because of the support of the Israelis. Netanyahu, said, a couple of days ago he has two missions, keep the settlement in the West Bank and protect the Palestinian Authority and Abbas. Even the head of police from Ramallah was in a private meeting here in Damascus and he said that Hamas could take over the West Bank in just a few hours.

Are there any training camps in Syria for Hamas?
We are in Syria and in other countries as a media office – to represent the cause. And we want to increase the awareness of the culture of resistance. And the Israeli’s are liars and are always saying that we have these things, these training camps, but we don’t.

Describe the relationships Hamas has with Iran.
We have a good relation – warm relations with Iran as we bond over the culture of resistance. And the US, every day creates a story to attack an Arab or an Arab country, so it’s not new to us.

We look to the US as the source of terrorism; therefore, we have to unify to fight this terrorism. The US occupies Iraq and they’ve killed more than 1.5 million Iraqis. And today, the American people believe that Rumsfeld was a big liar.

If they talk about Democracy in Iraq, why don’t they accept democracy in the Palestinian territories when Hamas won the election? So we have to unify our efforts with nations like Iran to combat the US and Israeli terrorism.

If Iran achieves nuclear weapons, will President Ahmadinejad make good on this threat to wipe Israel off the face of the map?
No, we will take care of that ourselves. We will knock off Israel and we’ll be happy to get help from any country – Syria, Sudan, anyone. We will never look at our suffering as some people look at it. Israel has used weapons, chemical weapons and no one in the world talks about that. So we will work hard to knock Israel off the map.

So is that your ultimate goal, to destroy Israel?
Our main goal is to occupy all of Palestine and to push Israel to the sea or back to their countries. We are over 10 million refugees, but we will return home soon.

I will believe that Israel will soon witness an uprising from within that will weaken them. And I believe that there is a high rate of emigration. People are leaving Israel. All of those immigrants came to Israel looking for security and money – today they have neither.

Europe has a large Muslim population. Will Europe eventually experience a backlash of violence because of their support of Israel?
The Europeans are supporting the Zionists and because of this, they will feel the brunt of the Islamic uprising in Europe. Europe talks about human rights and freedom and yet they support Israel when Israel initiated a siege on Gaza’s 1.5 million people.

When Hamas and the Palestinians capture an Israeli soldier from his tank, all European nations send delegates to Damascus to seek release of the prisoner. Meanwhile, we have 12,000 Palestinian prisoners, but no on talks about it.

What’s your prediction regarding Europe over the next year or two? Will there be Muslim uprisings there?
We know that there are Arabs living in Europe. They see how the Europeans support Israel, but we cannot evaluate their ultimate reactions just yet.

It’s the same in the US – there are many Arab Muslims living there. And we know that the Israelis use many US-made weapons against Gaza- and so far nothing’s happened in the US regarding an uprising. But it’s like a volcano and at any moment it can explode.

(Authors note: Since this interview, a European court ruled that crucifixes are no longer allowed in Italian classrooms. This was partially motivated by the Muslim population. In addition, Switzerland just voted to ban the building of Islamic Minarets in their countries. This indicates that tensions are increasing in Europe regarding their relationship with their Muslim minorities.)

What is Hamas’s Relationship with the Russian Government?
We started a political relationship after the election of Hamas to power. We have mutual interests. We have political ties with Russia. And we are ready to have ties with any nation that recognizes our rights and just like Israel has the support of the US, Russia helps us in the region. We have ties with them because they see our rights.

Does Russia support you with money and weapons?
No.

Does Hamas have any influence on US college campuses?
We don’t have ties with anyone on the campuses. We have some ties with former President Carter. And sometimes some American human rights groups come to Syria to discuss the condition of the Palestinian peoples.

Is there any funding from the US coming to Hamas from any source at all?
We don’t have donations from the US or Europe as we are designated a terror group. But if terrorism means that we adhere to our religion and adhere to our resistance, then we are ready to say that we are a terrorist group.

Phil Johnson is the president and founder of Global Next Research Group and Leadership Institute. To find out more about Global Next’s research or how you can participate in Global Next’s international leadership conferences, visit their website at: www.globalnext.org or contact Phil at: info@globalnext.org.