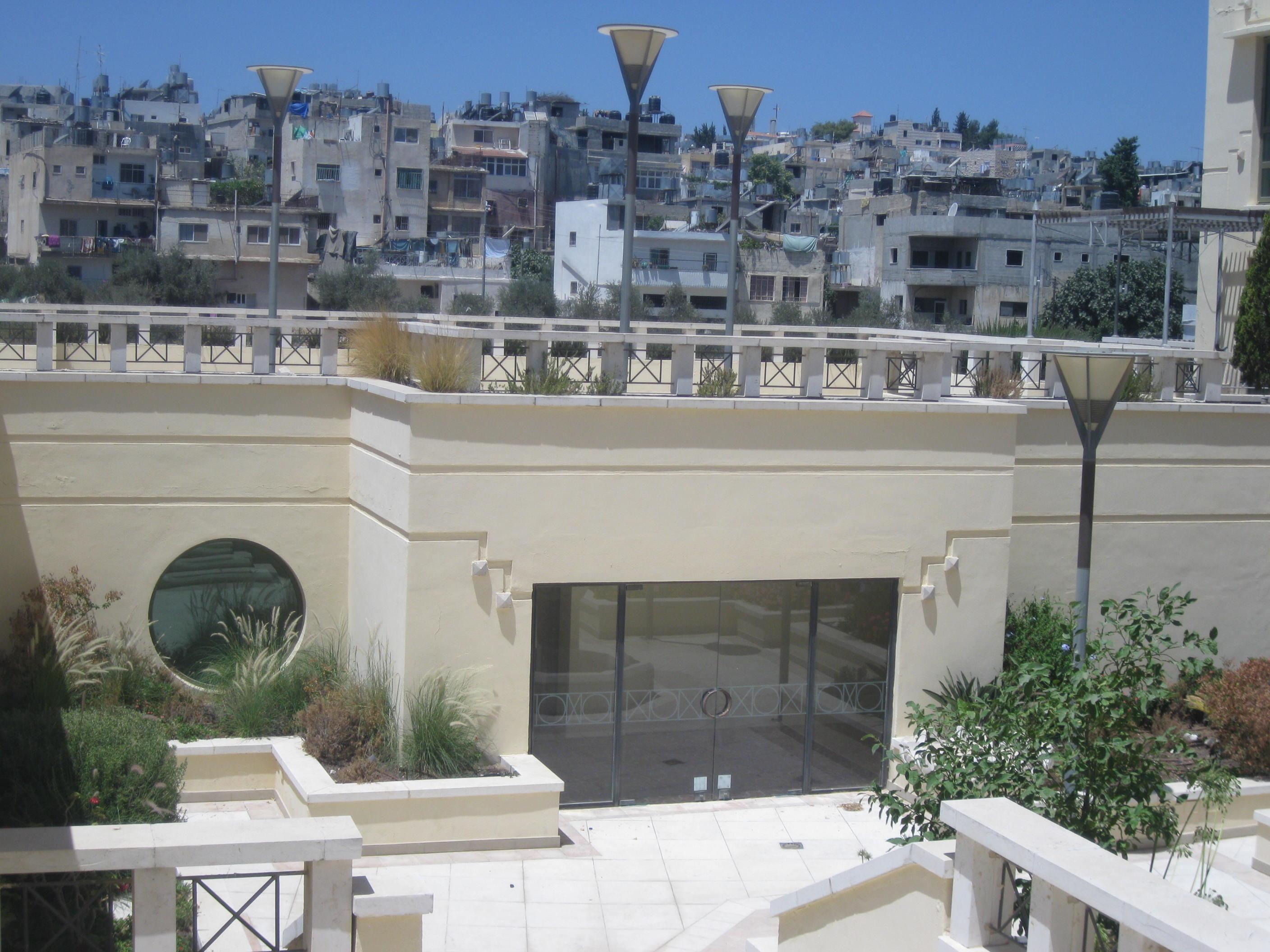 When I was in Bethlehem in August 2009 during the Fatah-PLO convention, I noticed the front of the majestic looking five star Intercontinental Hotel where Palestinian Authority Mahmoud Abbas and company were staying at the time.

What I didn’t realize then, and learned last summer during my next visit, is that the back of this five star accommodation, virtually adjoins Deheishe Palestinian Refugee Camp which is under the mandate of UNRWA.

Last August, my Palestinian guide wanted to show me the Intercontinental Hotel which had once he said was “the nicest hotel in all of Palestine-even better than the American Colony Hotel in Jerusalem.” We went inside to this grand looking buildingl, which is known as Jacir Palace, built in 1910 as a home for the extended family of a wealthy Bethlehem merchant, who was also a former Mayor of Bethlehem Suleiman Jacir.

It was a most jarring experience to see the new wing of this five star luxury hotel because the back of the hotel and the balconies of some of the newer rooms look into UNWRA’s Deheishe Palestinian Refugee Camp, where Palestinian leadership and the Arab world have let the refugees and their descendants languish in relative poverty for generations. This has been done in order to keep alive the notion of the refugees returning en mass to their homes and villages in pre-67 Israel (a return which would signify the destruction of Israel as a Jewish state, and something Israel would agree to let happen only if it was ready to commit national suicide).

An article of June 1, 2011 by Emma Mancini for the Alternative Information Centre (AIC) Naji Owdah, director of the Phoenix Centre in Deheishe Palestinian Refugee Camp, a cultural centre for children and adults, shows how this camp breeds extremism

“… Palestine won’t agree with the two state solution: it would mean giving up, forgetting the right of return, “ Owdah, says. MORE

I asked my guide how the Palestinians in Deheishe refugee camp deal with the fact that literally a stone’s throw away the elite in Palestinian and Arab society can flaunt their wealth in their faces. ( I presume that that from the windows of their homes, some of the refugees get a view of the luxurious hotel and its gardens)

He looked at me and shrugged, “It is what it is.” Near the Deheishe refugee camp, there is an upscale looking street where I saw nice café’s, and on another street there was also a modern looking design store. I took some photos of what appeared to be new gleaming banks from Arab countries, very nearby the refugee camp.

This jarring experience made me reflect on the fact that the PA leadership has no shame in staying in five star luxury immediately surrounded by the poorest elements of their society. It thus shouldn’t be a surprise to anyone if Hamas wins in the upcoming Palestinian elections (assumingthese elections actually occur), as they did in 2006 throughout the West Bank. It shouldn’t be surprising if Palestinians continue to view Abbas and his PA cronies as corrupt and out to benefit themselves and not their people., Khaled Abu Toameh, a prize wining Arab journalist, has just written an article “The New Palestinian State Will Be Run By Islamic Fundamentalists” making this point:

“Fatah continues to suffer from a problem of credibility among many Palestinians, largely because of its failure to reform in wake of its crushing defeat to Hamas in the 2006 election.” ( http://www.hudson-ny.org/2136/palestinian-state-islamic-fundamentalists ).

The jarring experience also drove home the point that that it is not the case that there isn’t enough wealth to re-settle Deheishe’s Palestinian refugees in Bethlehem itself or nearby in the West Bank in far better accommodation, and improve their living standards dramatically. This would enable them to focus their attentions on rebuilding their lives rather than destroying Israel.

The money invested in the PA’s Bethlehem from donor countries all over the world clearly has not ever trickled into the hands of the Palestinian refugees in UNWRA refugee camps such as Deheishe. Instead, the Palestinian leadership has deliberately not resettled and upgraded them, preferring to perpetuate the conflict with Israel by promoting their “ return of return.”

Whatever economic growth there has been in the Palestinian West Bank in the last two years (something that has attracted a lot of attention) it has not benefited the Palestinian refugees in the West Bank. They get to see the disparity between wealthy and poor growing around them, such that one should not be surprised if they all vote Hamas in the future.

In an interview at the American Israel Political Affairs Committee [AIPAC] conference in Washington last month, Dr. Tal Becker, an International Associate of the Washington Institute for Near East Policy told me that Israel “behind the scenes has tried to encourage [donor] states to channel aid they give to the PA towards “the rehabilitation of Palestinian refugees in the West Bank” [i.e. new homes for them] but Israel’s “efforts so far have been unsuccessful.”

This provides an opportunity for nations that contribute to UNRWA to reform the UNRWA policies, so that UNRWA will promote resettlement of the approx. 4 milliondescendants of Palestinian refugees from the 1948 Israeli War of independence who wallow in 59 UNRWA refugee camps under the illusion that they can be repatriated to villages from 1948 that no longer exist.

If the legislative bodies of the US, Norway, Canada and the EU (who provide most of the funding for UNRWA) would recommend a change in UNWRA’s policies to promote resettlement instead of the right of return, this would not only improve the lives of the descendants of Palestinian refugees, but would ultimately help resolve the Israeli-Palestinian dispute.

As Elliot Abrams, former deputy National Security advisor to George W. Bush told me in an interview at the AIPAC conference in Washington, the situation of Palestinian refugees “is unique” in the world.

“Every other refugee group that has been created since the World War II period has been handled by the UNHCR [United Nations High Commission for Refugees]”, but the Palestinians only are dealt with through UNWRA. Pursuant to the UNHRC’s mandate refugees “have often been resettled” in other countries, rather than returning to their former homes. The goal is “resettlement and a solution” to the problem.

Abrams noted that the “every other refugee group [other than the Palestinian refugees] certainly from the World War II period has been resettled,”and the problem has been “solved.”

There has been much talk of the new Palestinian city of Rawabi that is being built near Ramallah. At the AIPAC conference, retired Brigadier General Eival Gilady (who was in charge of carrying out the unilateral disengagement form Gaza in 2005 under Ariel Sharon) noted that Rwabi is being designed for 30-40,000 people to help grow the Palestinian middle class. Gilady is the managing Director of Portland Trust, which promotes joint Israeli-Palestinian ventures in the West Bank.

But when David Bedein of the Centre for Near East Policy asked Gilady, whether any of the Palestinian refugees in UNWRA’s refugee camps would be able to buy a new home in Rawabi, Gilady answered flat out, “No, they won’t be able to afford it.” [As an aside Gilady also told me after the session that in his view there ought to be “no right of return” for Palestinian refugees at all in any future agreement between Israel and the Palestinians -(“zero,” he said). Any return of refugees for family re-unification or other reasons in his view “ought to be done outside of an agreement.”]

David Bedein adds to this report: When I asked a representative of Rawabi whether Palestinian refugees could buy a home in the proposed new city, I was told no, as they have “the right of return.”