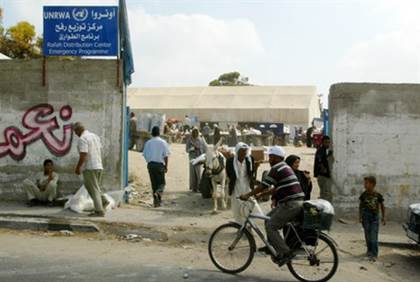 Over the past few months, UNRWA has vehemently attacked David Bedein and his Center for Near East Policy Research on the Arutz Sheva news site with vigorous denials that UNRWA initiates programs that indoctrinate UNRWA school children with the “right of return” illusion. UNRWA officials claim that they simply use the textbooks of the host entities: The PA, Jordan, Syria and Lebanon.

Bedein answered UNRWA by dispatching a televison crew from The Centerfor Near East Policy Research to cover the UNRWA summer camps in the agency’s facilities of Aida and Deheishe, where the center witnessed the UNRWA summer camp program that was completely dominated by the theme of inculcating pupils with a passion to return to “their” villages.
Bedein will be screening the Center film on the UNRWA “right of return” summer camp at the Press Gallery at the Canadian Parliament on Wednesday, at the Chicago Press Club the following day, at the UN Correspondents Assn. at the UN on Friday and at the National Press Club in Washington next Monday.
He said he has three purposes in mind:
1. To question why donor nations support an UNRWA educational system that runs contrary to any notion of peace;
2. To challenge donor nations to demand that UNRWA assume the humanitarian function of the UNHCR and aim to rehabilitate and resettle Palestinian refugees AND their descendants, instead of sentencing them to yet another generation of squalor and illusions;
3. To show the UN that the PLO has no interest in Judea and Samaria per se, since their education stresses all of Palestine

UNRWA’s raison d’etre is the  generations of Arab so-called “refugees”.Analysts have pointed out that the drive of the PA to declare a state unilaterally will end the possibility to call any Palestinians refugees, drying up the billions that the organization receives and allocates each year.