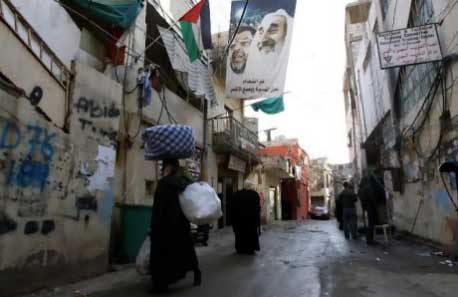 BEIRUT // Alia Hussein has lived all of her 59 years in Bourj Al Barajneh refugee camp in the southern suburbs of the Lebanese capital.

Her nine children were also raised in the crowded camp, and it is now her grandchildren who listen to stories about her parents’ village of Kuwaykat, in what is now northern Israel.

As anticipation mounts ahead of the by the Palestine Liberation Organisation (PLO) for Palestine to be accepted as the 194th United Nations member state on Friday, concerns have been raised about what this could mean for millions of Palestinian refugees.

Mrs Hussein explained that the quest for statehood has given her a glimmer of hope that it may finally mean the beginning of a process that will see her family returned to their homeland.

“I will be happy if there is a Palestinian state. All the world could respect us,” she said. “It’s a good step – maybe it’s the first step towards Palestine for us.”

It is now more than six decades since Mrs Hussein’s parents and hundreds of thousands of other Palestinians were driven from or fled their homes amid the escalating violence as the State of Israel was founded in 1948.

She is now one of five million registered Palestine refugees, some living inside the occupied West Bank and Gaza, others in Syria, Jordan, and Lebanon. Estimates place the total number in the diaspora as high as seven million.

While some including Mrs Hussein are guardedly optimistic about what the statehood bid could mean for refugees, many others remain sceptical about a process from which they feel disconnected.

Some complain that Palestinian officials have not presented them with a case for statehood, while questions abound about what impact recognition of a state based on 1967 borders would have on refugees, particularly their “right of return”.

UN General Assembly Resolution 194, passed in 1948, states that “refugees wishing to return to their homes and live at peace with their neighbours should be permitted to do so at the earliest practicable date”.

Abdullah Abdullah, the ambassador at the recently established Palestinian embassy in Beirut, stressed that the bid for full UN membership would have “no impact” on the rights of refugees, including their “sacred” right of return. He also dismissed speculation that refugees would be eligible for Palestinian passports.

“The PLO will continue as a national liberation movement until all issues [including the question of refugees] are resolved according to international law and resolutions,” he said. “The rules of the game will change [with UN recognition of statehood], but not the principles.”

After almost two decades of a failed peace process, supporters of the statehood bid believe it could shake things up and breathe life into stalled efforts to solve the intractable conflict.

But there is also fear among members of the refugee community that recognition of a Palestinian state would mean they will be forgotten, said Ali Huweidi, the general manager of the Beirut-based Thabit Organisation for the Right of Return.

“With the recognition, there is much more fear about the future of the Palestinian refugees and their right of return,” he said.

“Mahmood Abbas [the Palestinian president] and others, they don’t have the right to speak on behalf of us. They are not representing all Palestinians… There is no end of the occupation, so why they are leading our cause to commit suicide?”

Filippo Grandi, the commissioner-general of UNRWA – the UN agency responsible for Palestinian refugees – recently responded to concerns of some refugees, explaining that the agency’s services and programmes would continue until “there is a just and durable solution for the refugees”.

“There is no doubt in my mind that there can be no peace in the Middle East unless some five million refugees are brought out of their 63-year state of dispossession and exile,” he said in comments posted on the agency’s website.

Around 450,000 refugees are registered with UNRWA in Lebanon. According to Mr Abdullah, the actual number of Palestinians living in Lebanon fluctuates around 260,000, many of whom reside in the country’s 12 refugee camps.

Bourj Al Barajneh’s approximately 20,000 residents live in cramped conditions in an area of less than one square kilometre, surrounded by Beirut’s densely populated southern neighbourhoods. The camp is a maze of narrow alleyways; in some places the sky is almost completely obscured by canopies of electrical cables and water pipes.

Just down the street from Mrs Hussein’s house, Mohammed Eid, 23, peered out from his doorway. While he would be proud to see a Palestinian state represented at the UN, Mr Eid said he does not believe it will have a major impact on his life, much less his aspiration of returning to his grandparent’s village of Kabri, in the Acre district of what is now northern Israel.

“But maybe it would mean we could take more rights here in Lebanon, for jobs, insurance, health care and other things,” said Mr Eid.

Ali Hamzeh, a 35-year-old doctor studying to become a rheumatologist, was among hundreds of Palestinians who gathered outside UN House in central Beirut on Tuesday in a show of support for the statehood bid.

“Maybe this will give them [Palestinian officials] more power to negotiate with the Lebanese government for us to get better rights,” he said, standing out in the crowd in his white doctor’s coat. “It will give it a push, like there will be a proper state talking about our rights. It’s a positive thing. Things can’t get much worse than they already are.”

Despite qualifying as a general practitioner, Dr Hamzeh cannot practice medicine in Lebanese hospitals. Palestinian refugees face a wide variety of restrictions in Lebanon, including being barred from working in professional fields such as medicine, the law and engineering, and unable to buy or sell property. Many live a marginalised existence, residing in ageing and overcrowded camps, where there is high unemployment, dilapidated infrastructure and limited opportunity.