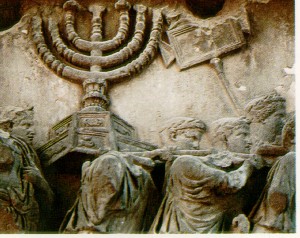 “…never send to know for whom the bell tolls

It tolls for thee.”

I’m standing on the edge of the Roman Forum, by the Arch of Titus. This is the marble structure built by the Empire to commemorate the capture of Jerusalem and the destruction of the Temple about 1941 years ago. Legionnaires are shown carrying off the Menorah and other items from the sanctuary. The inhabitants are sold into slavery, The Jews are finished.

Well, not really. Today, the great empire has long vanished and Israel is not just a living country but by every social, economic, and security standard a successful country.

In the late 1960s, more than 40 years ago, the Palestinian and Arab leaders were certain that Israel would not survive. The fact that they were completely wrong has not prevented a whole new rash of contemporary speculations.

The PLO view, shared by virtually all Arabs at the time, was very clearly defined. The two main points boil down to the following. First, Israel would not survive because there was no real basis for such a state and people. Second, the Arabs would destroy it using various strategies.

Here is the ultimate quote from Yasir Arafat in1968-that’s 43 years ago-on why this would work:

Terrorism would “create and maintain an atmosphere of strain and anxiety that will force the Zionists to realize that it is impossible for them to live in Israel….The Israelis have one great fear, the fear of casualties….”

The PLO’s attacks would “prevent immigration and encourage emigration….to destroy tourism, to prevent immigrants becoming attached to the land, to weaken the Israeli economy and to divert the greater part of it to security requirements.” This would “inevitably” prevent Israel’s consolidation and bring its disintegration. The final step would be “a quick blow by the regular armies at the right moment” to finish Israel off.

All of these things failed. More immigrants came than expected and were successfully integrated. People weren’t frightened into fleeing. Casualties were absorbed and limited. The country became economically successful and militarily victorious. Thus, today Israel is stronger-far stronger-than ever.

And if Arab states that were relatively united and had a superpower sponsor couldn’t destroy Israel in 60 years how are they going to do so today? With Israel outpacing its neighbors on every index of social and economic development, with so much oil money spent without really advancing Arab societies, who has the advantage today?

Remember what happened in 1948. True, all the Arab states invaded the new state of Israel But they didn’t coordinate with each other and all wanted to grab territory for themselves. With Iran and Turkey all jostling for power and leadership today, the conflict and disorder is intensified.

Yet now there is a revival of the claim-sometimes among ill-informed well-wishers, more often among antagonistic haters-that Israel might not survive. This is based partly on wishful thinking, partly on ignorance. Underlying these factors, however, is a basic disbelief that Jews are a people and can be a state.

And that reflects a lack of knowledge-often among Western Jews themselves-about Jewish history as well as a naïve acceptance of anti-Israel propaganda, claims that have proven to be false for decades.

Actually, then, the shoe is on the other foot entirely from what is being claimed. It is not Israel’s existence that is threatened but that of its adversaries and in some ways of Western Europe, too.

Its enemy neighbors and near-neighbors are about to embark on a decades’-long horrifying series of civil wars: Islamists against Arab nationalists; Sunni against Shia Muslims; economic collapse; and much more. Syria is on the verge of an inter-communal bloodbath; Egypt faces not some bright new economic dawn but a terrible reckoning. At some point the oil will run out with much of that wealth squandered. Recent discoveries even suggest that Israel itself will be a rising exporter of petroleum and natural gas.

Periodically, some radical Muslim writes that if only each Muslim would kill one Jew then Israel would vanish. High hopes are held for nuclear weapons that Iran still doesn’t have. But such schemes never get off the ground. Indeed, it is Arab nationalism that is endangered with extinction under a wave of revolutionary Islamism. By leaving the path of pragmatism for that of doctrinaire Islamism, Turkey is likely to lose the success it enjoyed for so many decades.

There is not one regime in a Muslim-majority country that should feel confident about its future; not one such state whose continued existence can be taken for granted.

In contrast, there are only two ways Israel might perhaps disappear. First, it might happen if Arabs and Muslims dropped radicalism, ideology, and bickering to concentrate on technological and economic progress for 50 years, only then turning on Israel. That would require, for example, the Palestinians quickly dropping all of their rejectionism and demands to make a compromise agreement with Israel that they had no intention of keeping.

Yet quite the opposite is happening now. It is radicalism, not pragmatic development strategies that is in control. Besides, the problem is that a focus on material development and moderate democracy would erode Arab and Muslim tempers to the point that they would no longer want to engage in such a foolish and futile life-and-death struggle, which is why the Islamists reject that approach.

The other way Israel might be wiped off the map is if its leaders heeded the advice they are getting from the West. That’s the irony of the situation. Those stubborn, stiff-necked people are not going to doom themselves by implementing the mistaken ideas told to them by Western media, experts, intellectuals, and governments who claim such policies are the road to safety.

Part of the problem here is that all too many Western intellectuals no longer believe in fighting-or even sacrificing-for your country; patriotic pride or nationalism or religion; or even the nation-state itself. Consequently, while many Arabs and Muslims don’t believe Israel can exist because of contempt for Jews and belief in the superiority of their nations and religion, many Westerners now believe in the wickedness of their countries and religion and the unviability of the national model.

In thinking about Israel, both these opposite arguments amount to the same thing. Yet they tell more about those having these ideas than about Israel.

When a European cabinet minister says his country has no distinct culture and another urges the locals to be nice to Muslims so they will reciprocate after they take over; when a European country’s counterintelligence chief.tells me his country has no future, and a quartet of professors from another remark to me over cocktails that they believe their country is finished, is it Israel that is in danger of collapse?

Who’s really facing the abyss? That doesn’t mean destruction will come to Europe’s existing states and societies but it does mean they are more likely to go than Israel is. You want to talk about demographic threats? In Europe, the majority is often having children at half the rate needed for mere replacement of the existing native population..

Yet all of this also shows why Israel is the key to understanding today’s world. Israel’s survival shows that democratic societies can fight and defeat dictators and totalitarian ideologies, Western religions do have a continuing place in Western societies and nation-states are still a viable-perhaps the most viable-way to organize many political structures.

That’s precisely why so many are working so hard to demonize and discredit Israel. If people in the West understand what Israel is and what it is doing, they will comprehend the value of those approaches and values. And if they understand how Israel is lied about and mistreated they will comprehend much wider problems with the people, ideas, and institutions governing their own lives today.

Incidentally, do you know what the Roman Empire did with the Temple treasures? It melted them down, sold the gold, and used the money to build the Colisseum, where bloodshed distracted people from their material and spiritual deprivation. Somewhere in there is an analogy to the twenty-first century world.