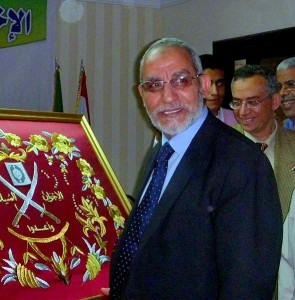 Let’s start with the Brotherhood. First, it promised to run candidates for only one-third of the parliamentary seats, saying this would proof of its moderation and willingness to share power.

Finally, now that the media admits this is a Brotherhood-controlled party, it announces, too, that it will run candidates for all the parliamentary seats.
How do we know they are moderate? Well, because they say so. For example, the Brotherhood has announced that it will not run on the slogan, “Islam is the solution!” Their new official slogan is:

How moderate can you get?

Some details. The Brotherhood’s Freedom and Justice Party dominates the 11-party Democratic Alliance (again, a nice “moderate” name). The Alliance will run candidates in the 76 multi-candidate proportional representation districts and in the 113 single-seat districts. Incidentally, two of its partners are leftist parties, including al-Ghad.

As in Tunisia (and Turkey and in the Palestinian elections won by Hamas some years ago), the opposition is divided, disorganized, and some of its members are ready to make a deal with the Islamists.

The “Facebook kid” left-liberal Justice Party has formed its own bloc called The Revolution Continues while the Salafis (openly radical Islamists) are trying to combine in the Nour Party.

The three main “liberal” parties-Wafd, Free Egyptians, Justice-are all running against each other. They’ll split the vote and in district after district the Islamists will win.

Moreover, the Brotherhood is following a brilliant strategy to build a united front for Sharia, bringing in other clerics and gradually winning over more and more of the religious establishment to an Islamist position. The proportion of non-Islamist forces among observant Muslims thus steadily declines. Religious Islam as it has been actually practiced and political Islamism have not been the same thing but they are increasingly becoming the same thing as the Islamists win the battle of interpretation.

As a result of all of these factors, I’m changing my prediction. A poll misread by American “experts” supposedly claimed that the Brotherhood had only 13 percent support and was no threat. I analyzed the poll as putting them at 33 percent. A new poll by the Danish-Egyptian Dialogue Institute puts the Brotherhood at 39 percent. I am now predicting that the Brotherhood and other radical Islamists may get to almost 50 percent.

Am I being too alarmist? Well let’s listen to the two most interesting non-Islamist political figures in Egypt. Amr Moussa, who might well be Egypt’s next president though it seems he will have to await elections in 2013, is one of the smartest politicians in the Arabic-speaking world.

A former foreign minister and head of the Arab League, he is also an intemperate, radical Arab nationalist who knows how to use demagoguery and populism to rally support for himself. Of course, that’s also why he’s the great black-white-red (the Arab nationalist colors) hope to defeat the green of the Islamists.

So it’s worth listening to his reading of the current situation. Briefly, Egypt will elect a parliament on November 28-probably with the Muslim Brotherhood as the biggest party-that will choose a constitution-writing committee in April 2012. Only after a constitution is completed, no earlier than the summer of 2013, will a president be elected. Thus decrees the military junta. Since he’s already 75, Moussa is understandably in a hurry.

Amr Moussa says that in the interim he fears Egypt could be plunged into a terrible crisis by growing violence and economic disaster (the country has lost an estimated $10 billion due to the revolution and subsequent disruption). That makes sense. “My biggest fear is anarchy,” says Moussa. “A long transitional period…will create an opportunity for all those who want to play havoc with the Egyptian society.”

Right. Islamists will continue to attack Christians, whom the government and army won’t protect. The Brotherhood will complain that if only it was in charge and could implement a policy of hope and change everything would be great. Islamists and liberals will join together to bash the junta as anti-democratic and intending to keep power for itself.

Te junta’s decision to create dual power-a military executive alongside an elected legislature-is understandable since it is horrified at the rise of Islamism and violence. But this is likely to be a turbulent situation.

Then there’s Naguib Sawiris, a billionaire, Christian, and the founder of the Free Egyptians’ Party, the only group that’s likely to fight Islamism. He has just given a fascinating interview to Bloomberg Business News.

The problem is that while the party has many Muslims in the leadership and membership (two-thirds, it claims) most of its votes will probably come from Christians, the only large sector of the population willing to battle for secularism.

Sawiris is not a man who is easily intimidated, ignoring the many death threats. Yet on the national stage he is merely an uppity dhimmi, albeit one with 139,000 followers to his Twitter account. He also has a sense of humor, posting a picture of Mickey and Minnie Mouse in Islamic garb. The Islamists, however, don’t have a sense of humor, launching a costly boycott of his businesses.

Last July, an Islamist preacher said on cable television, “We will kill him even if he repents.” You see, Sawaris lives in luxury and has massive business interests and power. But here’s how a revolutionary Islamist thinks: For all that, he’s just another infidel and one swing of the sword will cut through even the most expensive tailor-made collar.

Sawiris thinks Egypt may well end up like Iran. He watches as Christians are attacked, Islamist terrorists released from prison. and a rising demagoguery targets Israel as Egypt’s main problem.

Prediction: By mid-2012 everyone will be writing about the failure of the Egyptian revolution and how it has made things worse for the country and terrible for the region. Added prediction: they will be saying the same thing about Tunisia and Libya. Will this combination be enough to wake up the West to the threat of revolutionary Islamism and the catastrophic consequences of current Western policy toward the Middle East?