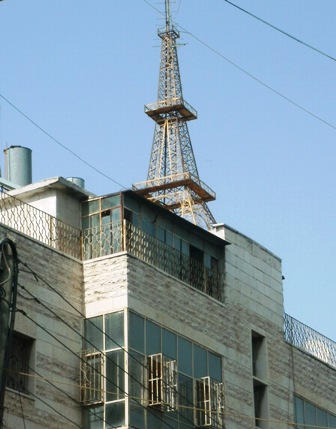 It was August 1, 2011 the first day of Ramadan. I had made plans to meet George (not his real name) a tall blonde blue eyed German who was living in Ramallah at 4 o’clock on the Palestinian side of the Qalandia checkpoint.

I knew from having been to the checkpoint before that the Israeli security fence wasn’t placed at Qalandia by accident. I have heard Israelis over the years talk about how Jerusalem has always had a small airport, called Orot. It turns out that this is where Qalandia is. The route of the Israeli security fence which was put up under then Prime Minister Ariel Sharon was designed to ensure that the Orot airport which services Jerusalem would be included on the Israeli side of the security fence. The idea of giving the PA an airport from which to potentially target Jerusalem and the rest of Israel was never in the cards, neither under Sharon, nor any other Israeli Prime Minister. If anything, I have heard Israelis say how thankful they are that they didn’t give the Palestinians in Gaza an airport, which would have enabled Hamas to create untold havoc via the skies.

If and when there is a Palestinian state in the West bank and Gaza, it remains to be seen where Israel would potentially agree to the building of a Palestinian airport, but I wouldn’t expect it to be built anywhere near Jerusalem, including Qalandia.

I found a cab driver outside a hotel near East Jerusalem and asked him to take me to Ramallah..

The driver Mahmoud (not his real name) an Arab form East Jerusalem, realized I was Jewish.

I knew from the year before when I had last visited Ramallah that I should pay my driver to drive me through the checkpoint rather than walk through it by foot. I was told by George that if a Palestinian in front of me were to be stopped and checked, I could wait for a while if I went by foot-up to an hour at least. Going through by car was quicker, especially if the taxi driver went through regularly and was recognized by the IDF soldiers. They just waved us through.

As I was about to be let off, I asked Mahmoud, what time it was. I was supposed to meet George at 4 o’clock. Mahmoud explained that since it was Ramadan, there was an hour’s time difference between” Israel and Palestine.” It was the first time that PA President Abbas had changed the clock for the duration for Ramadan, where Muslims fast during the day for a month and eat only at night. Hamas in Gaza hadn’t changed the clock. Even on that issue, Hamas and Fatah couldn’t agree.

“You are an hour too early”, Mahmoud said.

In the heat of the day, the last thing I wanted to do was wait around Qalandia checkpoint for an hour, so I asked Mahmoud to drive me around and show me something interesting.

I asked him if he would be out on the streets demonstrating in favour of President Mahmoud Abbas’s unilateral bid for a PA at the UN that was set to happen that next month in September.

“Me. Not me. I’m not going to be out on the streets. I’ll be at home,” he said. He didn’t think East Jerusalem Arabs would be out on the streets supporting Abbas. I don’t know anyone who will be demonstrating.” Mahmoud said this in a matter of fact way, not withstanding that popular jailed Fatah leader Marwan Barghouti had called for million man march by Palestinians in favour of Fatah’s UN bid.

I have heard this from many East Jerusalem Palestinians before, but asked Mahmoud to explain why he felt he’d rather live in Israel than a future Palestine. “I don’t want to live in a PA state. Are they going to be able to feed me?” he chuckled. Besides, Ramallah is a big prison-why would I want to go there. What’s there to do in Ramallah?”

I responded, that in a future PA state he would be able to go to visit not just Ramallah but any city in the West Bank he wanted to –be it Nablus or Hebron. And from there he could easily travel to Jordan if he wanted.

Mahmoud drove me around for close to an hour, and the most surprising thing I saw in the distance on the skyline appeared to be the Eiffel Tower.
Ramallah is the Paris of the West Bank, and yes, there’s even the Eiffel Tower! The Eiffel Cake and Sweet Shop of Ramallah has placed a replica of the Eiffel Tower on its roof. But instead of serving chocolate éclair’s, it serves Arabic sweets and pastries like knafeh and baklawa. (I wonder when Sarkozy comes to visit Ramallah if he’ll stop there!)

Back at Qalandia, I met George. The first thing he said to me was “Put that away,” seeing me carrying a small water bottle. “It’s Ramadan. Not a good idea to carry around water when people here are fasting.”

I understood his point but wasn’t about to get dehydrated with heat stroke either.

CELLPHONES AND US AID

We took a public bus from Qalandia to Ramallah and I couldn’t but help noticing huge billboards for the Palestinian cell phone company.

It appears that the cell phone is a way in which Abbas has funneled money to his sons– the 2010 Wataniya cell phone tender has reportedly yielded fruit for the president’s sons, Yasser and Tarek.

Wandering through Ramallah I could also see numerous buildings being built with US AID funds. You can’t walk too far without seeing a US AID sign. Abbas’s sons have reportedly grown rich from no-bid contracts, according to Reuters. The media agency reported in April 2011, that firms run by Abbas’s sons have received $2 million in US contracts.

The U.S. Agency for International Development (USAID) has denied that family connections were a consideration. USAID told Reuters that Yasser Abbas’s Falcon Electro Mechanical Contracting Company and Sky Advertising Company, where Tarek Abbas is general manager, won the contracts through “full and open” competitive bidding. I wonder about that. I thought of George’s remark when later in August Ma’an news reports that the municipal elections have been cancelled.
http://www.maannews.net/eng/ViewDetails.aspx?ID=415355 . Even on the municipal level, Abbas and Fayyad are afraid to have elections, out of concern that Hamas will win.

Before we left George mentioned that in Manara square after the Arab Spring, Palestinians had held a rally which he attended.” Someone had pitched a tent, but as soon as he started saying negative things about Abbas and the PA government, they cleared him and his tent away. No one knows if the Palestinians would turn on Abbas if they were allowed to say what they wanted at the rallies. People do not talk about politics on the streets here. It’s something that isn’t done.”

Since it was Ramadan, George had called around to see if he could find a restaurant that would be open (run by Christians most likely). We found one and had an early dinner together. It was a little creepy since we were the only ones in a restaurant that would normally hold several hundred people.[Needless to say, the service was excellent !]

I wanted to return to Jerusalem before dark and assumed that I would hop on a public bus from Qalandia back to East Jerusalem, which is what I had done the previous summer when I visited Ramallah. George had recommended the bus, since “Israeli soldiers come onto the bus and ask you to show your passport but that’s about it. You won’t be held up there for very long. It’s quicker than trying to walk through the checkpoint and getting a cab on the other side.”

I assumed I would do the same this year until George said, “Oh yeah, I forgot to tell you there is no bus anymore that goes through the Qalandia checkpoint.”

I digested this news.”Well how am I going to get back.”

He replied pensively, “It could be a problem. Palestinian taxis from Ramallah can’t take you back to East Jerusalem. You need to find an Israeli Arab from East Jerusalem taxi driver with Israeli ID who can drive you back.”

We were standing in the older part of downtown Ramallah, where I could see the billboard honouring a Palestinian suicide bomber (a billboard I had previously photographed) We tried to flag a cab but they were all Ramallah taxis that couldn’t go through the checkpoint and get me to East Jerusalem.

It dawned on me that I could be stuck overnight in Ramallah–and I was hoping that the Ramallah Movenpick hotel had rooms!
Then I remembered that I had written down Mahmoud’s telephone number–maybe he’d come from East Jerusalem to get me–except that my timing couldn’t have been worse. Sundown was approaching and he’d probably be having his festive Ramadan meal after a day of fasting.
I called him but he told me that his brother had the taxi that they shared not he.

Then he said, “But I’ll come get you with my regular car, not a taxi.”
I was very relieved.
He arrived with his son in the back seat and I thanked him. “Aren’t you missing your Ramadan meal?” I asked.
“Well we will wait until I get back,” he said.
“This was very kind of you” I said.
“Well what could I do” he replied. “How could I leave you in Ramallah? I wouldn’t want to be left there.”