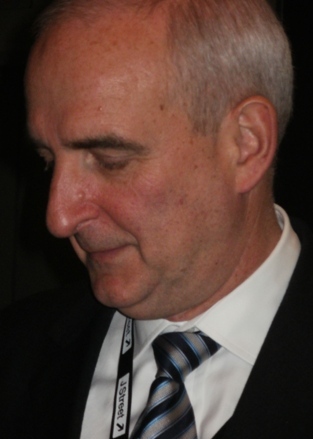 It’s been about a year and a half since I heard New York Times columnist Roger Cohen speak at the J Street convention in Washington at the end of February 2011.

At the time his comments on Iran struck me as off-base then (I meant to write about them earlier, but life intervened) but in fact with the passage of time, they appear all the more ridiculous.

Cohen, who wrote a series of articles for The New York Times in February 2009 about a trip to Iran, gave a talk to J Street supporters which clearly left an impression that Iran wasn’t anywhere near being able to produce a nuclear weapon, and as such there really was nothing much to be concerned about. In other words, all the fear about Iran was much to do about nothing.

He even went so far as to suggest that since Iran has been incapable of getting the recipe right for producing a bomb over the last 40 years, there was no real reason to be alarmed. After all, if they have not been competent enough to have made one in the last 40 years, why should we think they will get it right soon?

As he said “The Iranians have been messing around with this nuclear program for forty years! What are they doing?”

He made some comparison to Pakistan and India, saying that they had managed to go nuclear in a lot less time.
Hearing Cohen speak you’d think there was no real urgency in imposing harsher sanctions, or taking any action at all against Iran.

This wouldn’t be the first time Cohen was out of touch, as can be seen by the firestorm he unleashed when he wrote in 2009 just how well treated Iranian Jews are, whitewashing Iran’s antisemitism. For a fuller discussion of that see, Ron Radosh ‘s article in PJamas media
http://pjmedia.com/ronradosh/2009/03/02/memo-to-the-new-york-times-fire-roger-cohen/.

As Jonathon Tobin of commentary wrote about Cohen’s foray into Iran in 2009, “What Cohen did not write, though he admitted it in his Los Angeles talk, is that his interviews of Iranian Jews were conducted through a government-appointed translator and handler (Cohen does not speak Farsi) who he acknowledged would report to his masters in Tehran about both the journalist and those he met. Given the penalty for bucking the Islamist line about Israel for any Iranian, let alone a member of a despised minority, a less credulous journalist would not have taken the fruit of such interviews at face value. But Cohen not only reported the answers of his interlocutors as if they were a genuine reflection of Jewish opinion in Iran, he inflated them into a rationale for the Iran policy he wishes the United States to follow.”
http://www.commentarymagazine.com/article/an-ominous-turn-in-elite-opinion/.

Cohen on the Egyptian Revolution-Also out to Lunch.

In fact, not only was Cohen out of touch with Iran, but a talk before the entire plenary at J Street focused on how wrong Israeli Prime Minister was in being concerned about the Egyptian revolution and contrary to Netanyahu’s “grim scenario” and the dangers facing it, which “is so negative”, he thought everything in Egypt was “hopeful.”

As he said, “Very rarely if ever have I witnessed anything as uplifting as Tahrir Square”, and spoke of the “new Middle East”.
To see his remarks click here(start at 1:06): http://conference.jstreet.org/US_Israel_Relationship.

It’s pretty clear now, a year and a half later, with a Moslem Brotherhood government in Egypt, an Israeli Ambassador not yet able to go back to Cairo, and president Morsi’s unwillingness to even utter the word Israel, that Roger Cohen’s analysis about the new and great Middle East was a complete fantasy.

Roger Cohen is proof that a journalist can actually be on the scene-in both Iran and Egypt-and get it wrong.