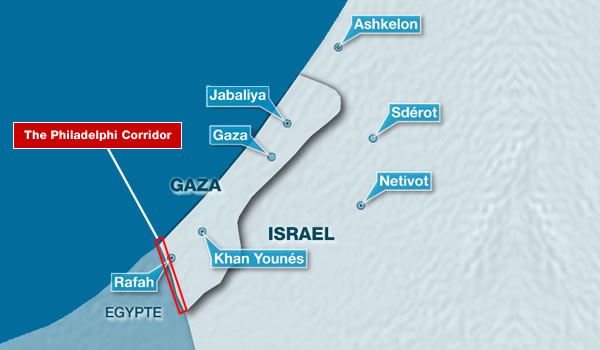 The Second Hamas-Israel War, of November 10 to 21, inspired a mighty debate over rights and wrongs, with each side appealing to the large undecided bloc (19 percent of Americans according to CNN/ORC, 38 percent according to Rasmussen ). Is Israel a criminal state that has no right to exist, much less to deploy force? Or is it a modern liberal democracy with the rule of law that justifiably protects innocent civilians? Morality drives this debate.

To any sentient person, it is obvious that Israelis are 100 percent justified in protecting themselves from wanton attacks. A cartoon from the First Hamas-Israel War, of 2008 to 2009, symbolically showed a Palestinian terrorist shooting from behind a baby carriage at an Israeli soldier in front of a baby carriage.

The tougher question is how to prevent further Hamas-Israel wars. Some background: If Israelis are 100 percent justified in protecting themselves, their government also bears complete responsibility for creating this crisis. Specifically, it made two misguided unilateral withdrawals in 2005.

From Gaza: Ariel Sharon won reelection as prime minister in January 2003 in part by mocking a rival who called for the unilateral withdrawal of all Israeli residents and soldiers from Gaza; then, inexplicably, he adopted this same policy in November 2003 and put it into effect in August 2005. I dubbed this at that time “one of the worst errors ever made by a democracy.”

From the Philadelphi Corridor: Under pressure from the U.S., especially from U.S. Secretary of State Condoleezza Rice, Sharon signed an agreement in September 2005, called “Agreed Arrangements,” that withdrew Israeli forces from the Philadelphi Corridor, a 14-kilometer-long and 100-meter-wide area between Gaza and Egypt. The hapless “European Union Border Assistance Mission at the Rafah Crossing Point” (EUBAM Rafah ) took their place.

Trouble was, the Egyptian authorities had promised in their 1979 peace treaty with Israel (III:2) to prevent “acts or threats of belligerency, hostility, or violence” but in fact permitted massive smuggling of armaments to Gaza via tunnels. According to a former head of Israel’s Southern Command, Doron Almog, writing in early 2004, “smuggling has a strategic dimension” because it involves sufficient quantities of arms and materiel “to turn Gaza into launching pad for ever-deeper attacks against Israel proper.”

Almog considered these policies “a dangerous gamble” by the Mubarak regime and a “profound strategic danger” that could “endanger the Israeli-Egyptian peace accord and threaten the stability of the whole region.” He attributed the lax Egyptian attitude to a mix of anti-Zionist views among officialdom and a readiness to vent the Egyptian public’s anti-Zionist sentiments.

Sharon arrogantly signed the “Agreed Arrangements,” contrary to the strong opposition of Israel’s security establishment. Of course, by removing this layer of Israeli protection, an “exponential increase ” in the Gaza arsenal predictably followed, culminating in the Fajr-5 missiles that reached Tel Aviv this month.

To permit Israeli soldiers effectively to prevent armaments from reaching Gaza, David Eshel of Defense Update argued in 2009 for the IDF taking back the Philadelphi Corridor and increasing its size to “a fully sterile security line of about 1,000 meters,” even though this would mean having to relocate about 50,000 Gaza residents. Interestingly, the Palestinian Authority’s Ahmed Qurei privately endorsed similar steps in 2008.

Almog goes farther: Noting deep Iranian involvement in Gaza, he advocates making the Philadelphi Corridor into a no-man’s-land by widening it to about ten kilometers. Ideally, he writes me, the U.S. Army Corps of Engineers will build this anti-smuggling obstacle and the American military will have a continued role policing the border. Second best, Israelis do this alone. (The still-operational Gaza-Jericho Agreement of May 1994 establishes a “Military Installation Area” under Israel’s full control – in effect, the Philadelphi Corridor – that provides Jerusalem with the legal basis to take back this crucial border.)

In contrast, Michael Herzog, formerly a high-ranking official in Israel’s defense ministry, tells me it is too late for Israel to take back the Philadelphi Corridor, that international pressure on Egypt to stop the flow of arms to Gaza is the solution. Likewise, former Israeli ambassador to the U.N. Dore Gold backs joint U.S.-Israel “arrangements” to keep out new weaponry.

I am skeptical about an effective American role, whether military or diplomatic; Israelis alone have the incentive to close down the arms transfers. Western governments should signal Hamas that they will encourage Jerusalem to respond to the next missile attack by retaking and enlarging the Philadelphi Corridor, thereby preventing further aggression, humanitarian tragedy, and political crises.