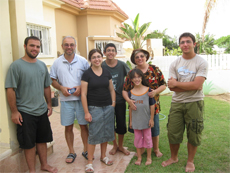 “Apparently, a democracy is a place where numerous elections are held at great cost without issues and with interchangeable candidates.” About 10 days ago, my daughter spent a day in Jerusalem with some cousins from abroad. She told me that she embarrassed herself in front of them. When an ambulance passed, with sirens blaring, close to where they were walking, my daughter, like all good southern Israelis, visibly jumped. Her cousins didn’t know what was wrong with her. “It’s only an ambulance,” they said, “why are you so afraid?”

Jumping at sudden noises is a southern reality. I know very few people here who don’t jump when a motorcycle whizzes by, or when brakes screech in the distance, or when strange music is heard on the radio.

A month after Pillar of Defense, there are still an awful lot of kids having trouble sleeping at night, wetting their beds, or missing school. There are still adults who, upon entering any building, first check out the whereabouts of the safe room; people who don’t like to leave the safety of their houses; people whose anxiety has become a part of their fabric.

For most of the country, the missiles are but a faint memory. “But nothing happened in the end, Iron Dome shot down all the missiles,” is the usual statement. This means, of course, that civilian fatalities were very low, few people were physically hurt, and the army, after all, didn’t enter Gaza. Thank heaven for all that.

Politicians are seen drinking beer with students, putting a note into the Kotel, or buying tomatoes in the local shuk, but there doesn’t seem to be much actual talking to voters. There’s a lot of conjecturing in the press – did he say this? Did he really mean that? – and a lot of mud-slinging amongst the politicians themselves – this one will bring us to war, and that one will bring the economy to its knees – but there doesn’t seem to be much discussion.

The Americans and Canadians in Israel (AACI) along with the Jerusalem Post have arranged various panel discussions featuring English speaking representatives in various cities around the country. The purpose of the evenings was to present the platforms of the leading parties (reps from about 9 or 10 parties were invited) in English, so that new immigrants, who often have a difficult time following the spit-fire Hebrew on the news, can make an intelligent choice when they vote. The cities included Tel Aviv, Jerusalem, Netanya, Beer Sheva, and Haifa.

Here in Beer Sheva, we found a place to have the talks – a beautiful old building from the British Mandate, which today is the Artist’s House, hosting hundreds of works of art created by Negev artists.

However, a week ago, we discovered that the event had to be canceled, both here in the south, and in Haifa in the north.

Apparently, Beer Sheva and Haifa were ‘too far’ to travel to. (Tel Aviv is 55 minutes by train from Beer Sheva. However, Tel Aviv to Beer Sheva is apparently several days on a camel, at least in the mind of our politicians….)

Reps from only two parties were prepared to attempt the journey south and north. HaBayit HaYehudi and Yesh Atid seem to recognize that Israel is more than the center. Avishay Braverman, a Labor MP and ex-Beer Shevaite (he was the President of Ben-Gurion University), also volunteered to come down to speak with us, when he was approached personally. But it wasn’t enough for the event to take place.

Politicians, it appears, are prepared to do just about everything to get elected, except speak to the voters. I suppose they are afraid to face people here, seeing how nobody has any answers for any of the issues facing the south; higher unemployment, inferior medical care, lower education standards, and of course security issues.

And so we have been, as we have for so many years, swept under the rug.

That rug is getting awfully lumpy.