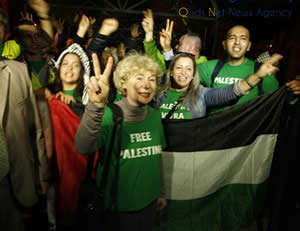 1. EuroPalestine is an anti-Israeli French organization headed by Olivia Zemor, a far-left Jewish-French activist. The organization participates in the campaign to delegitimize Israel and in the anti-Israeli BDS (Boycott, Divestment and Sanction) campaign.

2. EuroPalestine spearheaded three unsuccessful attempts to send thousands of activists to Israel on three occasions, twice through Ben-Gurion international airport (April 2010 and July 2011) and once over the Allenby Bridge (August 2012). All three events were intended as provocation, fodder for the media and to embarrass Israel. However, they did not receive the coverage the organizers hoped for and the event at the Allenby Bridge completely failed to attract media attention.

3. EuroPalestine recently sent a delegation of close to 100 activists to the Gaza Strip. On arrival they were received by members of the de-facto Hamas administration. They went to the border fence to hold a small low-profile display. They promised to promote Hamas’ political agenda and propaganda in French discourse and in French and international legal forums. They were accompanied by members of other networks connected with the campaign to delegitimize Israel, among them nine activists from an anti-Israeli network called Freedom Flotilla Italia, involved in the Gaza Strip flotilla campaigns. Network activists met in the Gaza Strip with operatives of the terrorist organization Popular Front for the Liberation of Palestine (PFLP) and other terrorist organizations.[1]

The EuroPalestine Delegation’s Visit to the Gaza Strip

4. A delegation of activists organized by EuroPalestine’s “Welcome to Palestine” campaign entered the Gaza Strip through the Rafah crossing on December 27, 2012. According to the members of the delegation (who aimed their arrival to coincide with the fourth anniversary of Operation Cast Lead) they came to “break the illegal siege of the Gaza Strip.” The visit lasted five days. Before their departure for the Gaza Strip they campaigned in a number of cities in France, primarily to collect donations and contributions for the Gazans. As part of the campaign dozens of letters were sent to French President Hollande demanding the imposition of sanctions against Israel (EuroPalestine website, December 17, 2012).

5. The delegation was headed by Olivia Zemor, a far left Jewish French activist who is president of EuroPalestine (See Appendix C). Arriving in the Gaza Strip she said that she was very emotional and happy because it was the first time a EuroPalestine delegation had succeeded in entering the Palestinian territories (Press TV, December 27, 2012). [Note: The three previous attempts, two through Ben-Gurion international airport and one over the Allenby bridge, failed). Olivia Zemor, EuroPalestine president, leader of the its delegation to the Gaza Strip (Qudsnet website. December 28, 2012)

6. Most of the members of the delegation (an estimated 60%) were French, but there were also members from Belgium, the United States, Ireland, and 25 activists from Egypt. They brought medicines, foodstuffs (mainly candy) and French textbooks. They were the guests of Nabil Abu Shamala, director of planning and policy in the ministry of agriculture of the de-facto Hamas administration. At a press conference held on the eve of the visit he said that he regarded such visits as having great public relations, legal and political importance. He said that these kinds of solidarity activists served as “pressure groups” within their own countries and were a direct means of transmitting information about the situation in the Gaza Strip (Qudsnet website, December 28, 2012; Al-Aqsa TV December 30, 2012).

7. According to Olivia Zemor, the objective of the visit was to send the international community the message that the Israeli “siege” of the Gaza Strip and the West Bank was illegal and had to be lifted. (Note: The Palmer Committee, appointed by the UN secretary general after the violent confrontation aboard the Mavi Marmara, determined that Israel’s security closure of the Gaza Strip was a “legitimate security measure” and was motivated by purely security concerns.) She also said she was willing to act in France on behalf of the Gazan fishermen and for the rights of the Palestinian prisoners in Israeli jails (Interviewed by Hamas’ Al-Aqsa TV, December 31, 2012). In addition, members of the delegation said they were planning to document the suffering of the Gazans and to present their findings to legal groups in France and the rest of the world (Shihab website, December 31, 2012).

8. In Cairo the delegation was joined by nine activists from the Freedom Flotilla Italia network. During their stay in the Gaza Strip they met with senior figures of the PFLP and representatives of the other terrorist organizations. Freedom Flotilla Italia is an Italian network involved in the campaign of dispatching flotillas to the Gaza Strip, currently enlisting contributions for a project called Gaza’s Ark. The goal of the project is to build a boat and sail it from the Gaza Strip loaded with goods as a way of defying the Israeli “siege.” In addition, the network is planning to construct a park in Italy and name it for Italian journalist and ISM activist Vittorio Arrigoni, abducted and murdered by a Salafist-jihadi network in the Gaza Strip on April 15, 2011.

9. During their stay in the Gaza Strip the activists were taken on guided visits organized by Hamas. They visited the Al-Shifaa hospital and various sites in the Gaza Strip hit by the IDF during Operation Pillar of Defense. They repeated the Hamas propaganda mantra that the destruction indicated “Israel’s desire to damage the civilian infrastructure,” particularly criticizing the IDF hit on the Gaza stadium (Europalestine website, December 28, 2012). (Note: The IDF struck weapons stockpiled in the stadium, which served as a launching pad for rockets fired into Israel.) The activists also visited the Islamic University (a Hamas stronghold), the port of Gaza and the monument erected for the Mavi Marmara flotilla (Al-Aqsa TV, December 30, 2012).

10. On the afternoon of December 31, members of the EuroPalestine delegation, including the members of the Italian network, gathered near the Israeli border security fence (apparently in the central or northern Gaza Strip). They later claimed they had seen the damage done by the IDF and expressed solidarity with local farmers and residents living near the fence. They held a low-key display against the so-called “the occupation forces” and used it for a photo-op near the fence (Shihab News Agency and the Freedom Flotilla Italia websites, December 31, 2012).