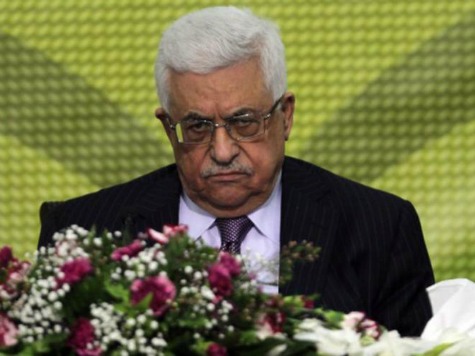 An example came earlier this month, when Abbas praised a litany of deceased Palestinian terrorists as martyrs; included in his praise were Hamas founder Sheik Ahmed Yassin, Palestinian Islamic Jihad founder Fathi Shikaki, and Popular Front for the Liberation of Palestine founder George Habash. Abbas named each during a January 4th rally for Palestinian unity in Gaza. The rally took place on the eve of Egyptian-sponsored unity negotiations with Hamas leader Khalid Meshaal in Cairo.

“We must remember the pioneers, the Grand Mufti of Palestine Hajj Muhammad Amin Al-Husseini as well as Ahmad Al-Shukeiri, the founder of the PLO,” Abbas said according to a translation of the speech made by the Middle East Media Research Institute (MEMRI).

Al-Husseini was a close ally of Adolf Hitler who instigated terror attacks against Jews and moderate Palestinians in pre-World War II Palestine. He also helped organize a Muslim SS division and was complicit in the Holocaust, preventing the rescue of 19,000 Jewish children.

“The National Socialist movement of Greater Germany has, since its inception, inscribed upon its flag the fight against the world Jewry. It has therefore followed with particular sympathy the struggle of the freedom-loving Arabs, especially in Palestine, against Jewish interlopers,” Al-Husseini wrote during World War II.

The State Department declined to comment when asked about these statements by the Investigative Project on Terrorism.

“Saying such things is a form of incitement,” said Jonathan Schanzer, vice president for research with the Foundation for the Defense of Democracies. “We are seeing rhetoric in camps that were previously seen as moderate, and it is rhetoric heading in the wrong direction.”

It is a direct response to the populism that followed the Arab Spring.

The rhetoric also stands in stark contrast with what Abbas said in November, when he pledged there would be no Third Intifada on his watch. “As long as I’m sitting here, in this position, I will not allow an intifada. We will act only through diplomatic and peaceful means,” he said.

Such rhetoric has been matched by Israel’s southern neighbor; Egyptian President Mohamed Morsi called the Israelis “the descendants of apes and pigs” in 2010 when he said the “Zionists” needed to give the Palestinians everything they want or face war.

Journalist Jeffrey Goldberg was struck by the lack of attention those comments, which were only recently translated and released by MEMRI, garnered in the West. “One possibility is, to borrow a phrase, the soft bigotry of low expectations,” he wrote. “Another: Anti-Semites have done such a thorough job of convincing the media that anti-Semitism doesn’t exist that when it does pop up it causes a paralyzing form of cognitive dissonance.”

Abbas’s comments shouldn’t surprise anyone who has watched the situation with the Palestinians since the 1990s, according to David Bedein, who runs the Jerusalem-based Israel Resource News Agency.

“The PLO and Hamas signed a formal working agreement in December 1995 in Cairo and have continued their working agreements ever since, despite their rivalries,” Bedein said. “The PLO leaders and media spokesmen, from Arafat to Abbas, have consistently conveyed a message of war to liberate all of Palestine (including all of present-day Israeli territory) under the banner of the ‘right of return,’ as expressed in the schools and media of the nascent Palestinian Authority.”