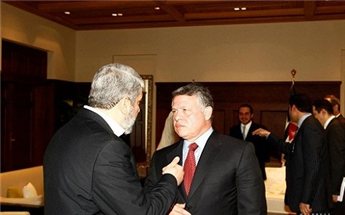 GAZA CITY (Ma’an) — Hamas on Wednesday said it does not accept the two-state solution, following reports the party had changed its position to accept the state of Israel.

Hamas said in a statement that the report was baseless and that Mashaal did not address the two-state solution in his meeting with the Jordanian king in Amman on Monday.

Hamas will not change its position, Moussa told Ma’an.