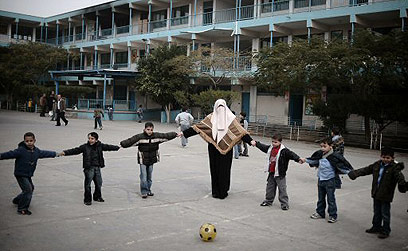 VIDEO – For decades the conflict between Israel and the Arabs has remained unresolved. Time and again efforts have been made to find a solution and bring peace between the two sides. While Israel has a formal peace treaty in effect with two neighboring countries – Jordan and Egypt, relations in each case fall short of expectations.

The nagging issue affecting a long sought comprehensive breakthrough is the possibility of a Palestinian state. In order to facilitate this both sides have to be committed to live in peaceful coexistence with each other. While Israel has made it clear it deeply desires peace with all its neighbors, including the Palestinians, can the same be said of the Palestinians?

Information has recently come to light which suggests peace with Israel is not what they seek. In fact, their desire appears to be anything but.

A recently released video produced by the Center for Near East Policy Research examines Palestinian schools run by UNRWA (United Nations Relief and Works Agency). It reveals coexistence with Israel is not being taught to Palestinian children. Instead what they are learning is actually fomenting terror.

Created in 1949 specifically to deal with the “Palestinian refugees,” UNRWA spends roughly $500 million each year on schools. It utilizes text books produced by the Palestinian Authority. The UN itself does not finance UNRWA. Primary financial support comes from US and European taxpayers.

A central theme in these text books is the so-called “right of return,” which if allowed would eliminate the Jewish majority in Israel.

While other agencies work in Judea and Samaria, Jerusalem and the Gaza Strip, the video indicates UNRWA is the only agency which actively supports the right of return, and teaches it in the classroom. Footage shows young Palestinian school children beginning their day by shouting out, “Glory and eternal life to the martyrs and the righteous, Jerusalem is ours, we will liberate it.”

Teachers who are interviewed readily admit the right of return is central to the curriculum taught to the children. One instructor indicates some teachers who are more religious teach their students “Israel must be wiped out.” Students are also taught Israelis are “occupiers.”

One headmaster, Alwad al-Keek, who taught in the school system for 23 years, worked for the terror organization Islamic Jihad, building bombs and Qassam rockets.

The video also indicates Sheikh Ahmed Yassin, one of the founders of Hamas,

was invited to speak at an UNRWA school. The purpose of his classroom visit was to lecture about suicide bombing and martyrdom. He was invited by the head of the Gaza teachers union. Yassin, the spiritual leader of Hamas, was killed in 2004.

Not even the youngest children are immune from being “educated” with the venomous curriculum. Two clips show children under 10 years of age talking about the need to kill the Jews. Another clip has a young student referring to Jews being the enemy of Allah, saying “we must kill all of them.”

It probably wouldn’t come as a great surprise if these schools were run by Hamas, since their views about seeking Israel’s destruction are well known. However, UNRWA is a United Nations organization, which is being supported by American and European tax money.

The United Nations charter is meant to foster peaceful coexistence between all people. The theme of UNRWA, in all their publications, is “Peace starts here.” Yet inside these UNRWA classrooms peace is actually being sabotaged.

The US and Europe should give serious consideration to withholding financial support from the UN until UNRWA stops providing this blatantly anti-Israel curriculum which promotes jihad.

Young children are not old enough to fully understand the difference between right and wrong. They are impressionable and are molded by what they are taught. These “educational” institutions are not producing the scientists, businessmen or technology leaders of tomorrow. They are producing future generations of terrorists who grow up believing murder is holy. This guarantees the endless cycle of hate will continue. It’s no wonder the conflict hasn’t been resolved.

What does this say about the future prospects of peace? How much sense does it make to be talking about peace negotiations when terror is being instilled into the hearts and minds of tomorrow’s Palestinian adults?

From a purely psychological perspective, teaching children that jihad is holy can only be described as institutionalized child abuse on a massive scale.

What’s going on is not only a human tragedy, it’s putting a dagger in the heart of all peace loving people.

I wonder if it’s possible for UNRWA to be sued for promoting child abuse.