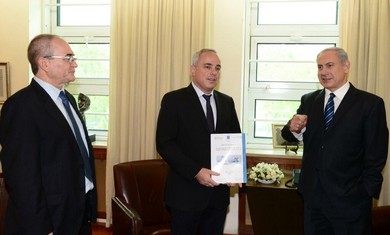 For over 10 years, I’ve been fighting, along with many friends, to get out the truth about the al-Dura blood libel.

For many years, the strongest argument of our opponents has been the silence of the State of Israel when my efforts were sometimes undermined by Israeli diplomats. So getting the support of Israeli public diplomacy was an important objective.

It’s a milestone on the way to the truth.

Yesterday, a French court of appeals was expected to release its verdict on another episode of my defamation trial against France 2, but the verdict was postponed, for the second time. It is now due to be given on June 26.

My victory in that case could be an important step forward, but nothing is certain.

Five years ago, after I won the appellate court trial, France 2 denied the report was a hoax and appealed to the French Supreme Court on technicalities. Last year, they won and the verdict was annulled. The highest French court said we didn’t have the right to look at France 2’s raw footage to decide if I was right or wrong to accuse them of having staged their news report.

Kafka was back! If I lose, you can be sure Israel demonizers and France 2 will use the verdict to slander Israel, and me, even if I lose on technicalities.

Almost 13 years after the broadcasting of the Dura hoax, Israel is still trying to recover its good name, and this should be a reason to worry for the State of Israel and its citizens. Thirteen years and so many lives lost because of Israel’s silence, because of Israel’s incapacity to understand global anti-Semitism is fed by Israel’s reluctance to defend its point of view.

During all these years, I’ve been undermined by Israelis; ambassadors, politicians, journalists and by a prominent American Jewish organization which preferred to keep access to the French politicians over fighting for the truth. Nevertheless, I was confident because the truth has always been on my side.

NOW THAT the State of Israel has taken the official decision to fight for its good name, it is important to encourage it to continue and to analyze how this huge PR failure has been allowed to go on for so long.

This Kuperwasser investigation committee has been important and productive. I strongly recommend that the State of Israel establish another investigative committee to determine the problems which led to this situation.

One day or another, Israel will face another lie, another blood libel or other false accusations during military operations. Israel was not prepared for this war, and Israel lost.

Since the creation of the State of Israel, Arabs, with the complicity of some Western countries, have tried to destroy this tiny nation by open warfare. They failed.

Then they tried terrorism. In the end, that also failed. So, they turned to media war – and here, unfortunately, they succeeded.

The result is that now, the wars Israel wins on the ground, while respecting international laws and treaties, are lost on the media battlefield, and then in the diplomatic arena.

The official Israeli report, which was issued on Sunday, shows a turning point in the Israeli authorities’ state of mind: they decided to fight for their good name. This is good news, and will be effective only if they are able to analyze their mistakes and draw conclusions in order not to repeat past mistakes.

As in every previous war, Israel has no choice but to win. It’s a question of survival, and I’m sure Israel will succeed.

The writer has been a truth fighter on the Dura case for more than 10 years.