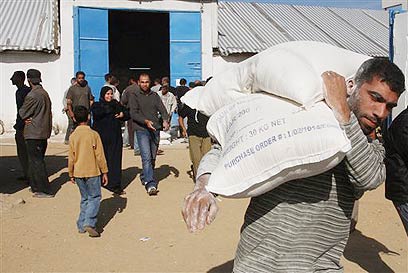 The time has come to admit the truth: The world cares more about the life of a Palestinian than the life of a Syrian, Sudanese, Kenyan, Colombian or Congolese.

People from all around the world have chosen to adopt the Palestinian cause as their darling, as is their right. But it is important to understand that they do so at a cost. Each dollar sent to Palestinians in the Gaza Strip is a dollar not sent to the survivors of Sudanese genocide, who lost approximately 300,000 of their brethren at the hands of the murderous Janjaweed militia. Each university rally for “Palestinian human rights” is a rally not held for the victims of sexual and gender-based violence in Congo, the DRC and Rwanda. Each flotilla sailing to the Gaza Strip is a flotilla not sailing to Syria, where over the past two years Syrian President Bashar Assad has perpetrated a brutal mass murder against his own civilian population.

More than 90,000 Syrians have now been killed in the violence, according to the US State Department, and that number continues to grow. But underneath this staggering death toll lies another statistic: More than 1.5 million Syrians have been officially registered as refugees by the UNHCR; the actual number of Syrian refugees is much, much higher. A senior UN humanitarian official recently estimated that 8.3 million Syrians now require aid, including IDPs within Syria.

The UNHCR has already issued an emergency plea for funds, and is set to launch a “revised funding appeal” to help cover the mounting costs of caring for the Syrian population. As of now, the organization has just over 50% of the funding necessary to cover its expenditures in Syria, and has warned that “the lack of adequate funding for Syria… risks to turn the present conflict into a disaster that could overwhelm the international response capacity, with political, security and humanitarian consequences.” If I were a Syrian refugee, I would be looking to UNRWA, with its bloated support staff and its relatively massive budget, and I’d be seething.

There is no disputing that UNRWA is devouring aid money that could be put to better or more equitable use elsewhere. But even that is not the worst of it.

UNRWA is actually perpetuating the cycle of degradation in the Palestinian territories.

One of the main tasks of the UNHCR is to find permanent solutions for refugees and IDPs, either through repatriation, integration in the local country, or resettlement in third-party countries. The agency has done a tremendous job, finding solutions for well over a million displaced people. It arranged for 300,000 Vietnamese to be resettled in China, 140,000 Bosnia-Herzegovinians and Croatians to be resettled in Serbia, more than 27,000 Colombians to resettle in Ecuador, and the list goes on.

Meanwhile, UNRWA is not only failing to resettle its clients, but is indeed finding new ways to increase their numbers. The agency upholds two policies in particular which have led invariably to the swollen refugee population size.

1) Palestinians, unlike any other refugee population in the world, pass on their refugee status from generation to generation.

2) Palestinians, unlike any other refugee population in the world, maintain their refugee status even when gaining citizenship in another country.

It is difficult to overstate the mind-numbing absurdity of this situation. But still, it gets worse.

There are a number of steps that the United Nations should take immediately in order to provide more equitable care for refugees around the globe, and in order to end the destructive cycle of poverty perpetuated by UNRWA. Dr. Einat Wilf, a former member of Knesset for the Labor and Independence parties, has proposed a three-step plan for fixing the broken system. Below is a slightly modified version:

1) Dismantle UNRWA and integrate the organization’s activities into the UNHCR. There should be no such thing as a refugee with citizenship, and no such thing as a third-generation refugee. The UNHCR should commence with its regular policy of resettling refugees in third-party countries or integrating them locally.

2) Treat Palestinians in the Gaza Strip on the basis of need, not refugee status.

3) Turn over the UNRWA budget for the West Bank to the Palestinian Authority, which should take over administration of educational and medical facilities.

But reforming the international humanitarian aid system is just one step that must be taken to rectify a system that has been so grossly unfair for so many years. People around the world must end their own personal favoritism towards the Palestinians, which has come at the expense of other refugee and IDP populations across the globe.

The time has come for the world to stop valuing Palestinians over all.