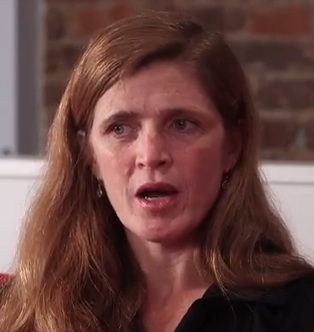 Samantha Power is now President Obama’s nominee for United States ambassador to the United Nations. In 2002, in the wake of the “Jenin massacre” libel, she famously called for a “mammoth protection force” for the Palestinians, but later claimed to have forgotten why she did so. In a post you may recall, from 2008, I reminded her of precisely what possessed her. She had fallen under the spell of Michael Ignatieff, then her buddy at Harvard, who had come up with the idea that the United States should impose a solution on Israelis and Palestinians, and then send in troops to enforce it. Just go to this link for the original post. I wrote it not out of any animus toward Power, but as one more exploration of why really bad ideas about the Middle East are sometimes entertained by otherwise intelligent people.

Much of the job of the U.S. ambassador to the UN is to deflect waves of hostile resolutions against Israel. We will learn something about character when Ambassador Power is called upon to rise vigorously to Israel’s defense. Given her reputation, I’d wager that Israel’s enemies will put her to an early test.