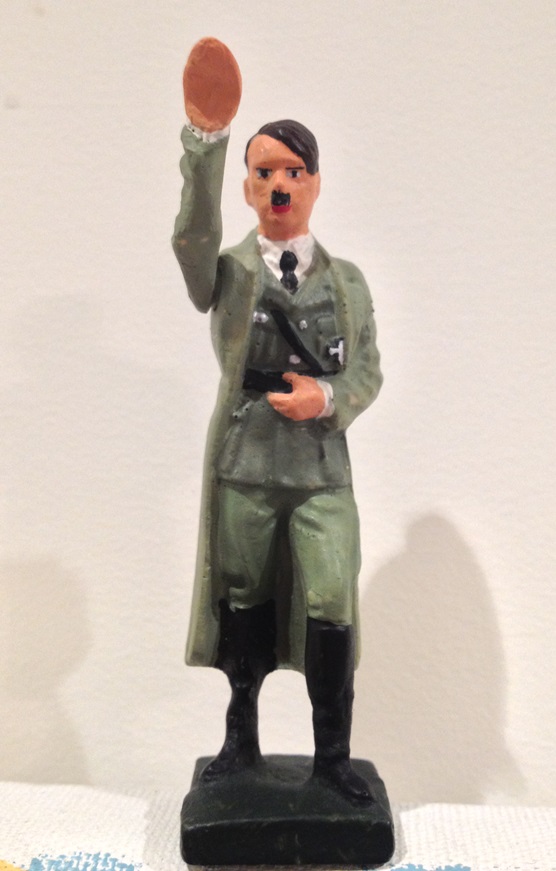 Outside the Hotel Deutcher Kaiser in Nuremberg, where Adolf Hitler used to stand on the balcony and inspect the passing Nazi troops and wave to adoring fans, I took a stroll down the street to a nearby artisan area.

There a store that sold toys and other items caught my eye. I wandered in and noticed it had a lot of old toy cars for sale. I walked in further and there on a shelf in a glass case I saw some small figurines–one was a soldier with a Nazi flag with a swastika. Next to him were some Adolf Hitler figurines. There were one, two, three of them.

I was the only one in the store and motioned over to the older woman behind the cashier who spoke only German. She came by with a key to open the glass case. I was a little shocked to see Hitler figurines, “collectors” items from the Nazi period out on display just like anything else. I pointed to the Hitler one, telling her I wanted to see it.

She motioned with her hand to show me that the mustache on the figurine meant it was a Hitler (I had already figured that out).

I was taken aback to hear her in 2013 still referring to Hitler as the “Fuhrer.” Why use that word? (Somehow I began thinking it was very possible that she had come from a family that had rather liked Hitler.)

One of the Hitler figures, which was about the height of my index finger, cost 89 Euros. The other figure was more expensive–98 Euros. The added feature that it had was that Hitler figurine’s right arm could go up so that a salute could be given. It was arresting to see it.

I hadn’t known what I would buy as a souvenir from Nurnberg and this was much more expensive than I had considered. But then I began to think of the educational value to show students who study the Holocaust. It makes for quite a classroom exhibit. I intend to donate it. (Everyone in Israel I have shown it to is quite taken aback to see it and to note that I could find it in Nuremberg in 2013). Besides it makes for a much better story than buying an ‘I love Nuremberg’ coffee cup.

And hearing the woman say “De Fuhrer” will probably be seared into my consciousness for a long time. With my little Hitler figurine in my bag, I walked to the main central market area of Nuremberg, the Hauptmarkt, which is another story in itself, because the main Church in the central square is in fact built over the site of what was once a synagogue, and the central market area ( which is in all the postcards) is built on the area of the destroyed Jewish quarter. As my Czech guide explained, when Nuremberg was a medieval capital and trade centre, Jews arrived and were allowed to settle in this area originally because it was marshland and more difficult to settle than the north or south of Nuremberg. But then came the black plaque and Christians blamed the Jews for it (even though the percentage of Jews who died was as large as the percentage of Christians). In 1349, German emperor Karl IV ordered the destruction of the Jewish quarter to make the area into a market place: there was a pogrom and 562 of the 1500 Jews were burnt.

I raised my eyebrows as I read how the current Nuremberg city guide book I bought describes the pogrom:

“In 1349 Emperor Karl 1V supported the city council in its request to establish a marketplace… instead of the Jewish quarter that existed there. At the same time, Nuremberg’s inhabitants availed themselves of the opportunity to get rid of their unpopular fellow citizens. [Emphasis added]”

According to George, my Czech tour guide “many of the Jews who survived went to live in Fürth, Bavaria, Germany, which is where Henry Kissinger’s family was from.” (Furth is 7 kilometers away from Nuremberg and Heinz [Henry] Kissinger, who was born there in 1923 fled with his family in 1938 to the US).

Now when I see old photos of Hitler with the Nazi troops in the central market place in Nuremberg, I understand that it would have been clear to the Nuremberg citizens there that they were congregating on the destroyed Jewish quarter of 1349.

Today Nuremberg’s Hauptmarkt, ( the destroyed Jewish quarter), is where Germany’s most famous Christmas market, the “Christkindlesmarkt” is held, and tourists from all over gather to see it.

When I got to the Hauptmarket, my guide George who is originally from Czechoslovakia pointed to the large Frauenkirche church that dominates the square, a church which is in all the postcards and on many souvenirs and said, “The church was built on the site where the synagogue in the destroyed Jewish quarter was. ” He then told me that on the floor of the church there is a big Star of David. The guide book says that after destroying the Jewish quarter in 1939, Emperor Karl IV bestowed the church on the city, which was erected between 1350-1358.

I again raised my eyebrows when I read in the guide book, “The Frauenkirche which towers above the Market square can perhaps be looked upon as a symbol of atonement for the destruction of the Jewish quarter.” [Emphasis added]

In other words, I think the guidebook is suggesting that that after killing off the Jews, the Emperor’s way of atoning was to build a church on the site of their synagogue that he had burnt down… It’s interesting, isn’t it, that this is the theory that the city guide is promoting in 2013.

I wanted to see Star of David that George had said was on the church floor, but the church was closed so I went back the next day. I read through the guidebook and couldn’t see anything about a Star of David on the floor of the church.

I entered the church and looked everywhere on the floor and couldn’t find the Star of David. I then went up to the “bimah” and sure enough there is a large Star of David that is very visible once I was on the bimah. (There is no way of seeing the Star of David unless you are on the bimah.) Just as I took out my camera to take a photo of the Magen David, a German man (who I assume was the church custodian, but I didn’t stick around long enough to ask) came out from a side door attached to the bimah and began yelling at me to get off the bimah. (He was yelling in German and I am surmising that’s what he was saying.) I stayed there just long enough to get a photo of the Star of David and then hurried off the bimah and out of the church.)

I have searched the internet to see what I could find about why there is a large Star of David on the church bimah. My guide George had made it sound like it was from the original synagogue floor but I don’t think that is necessarily correct-in fact, if anything, it looks newer. A tourist who visited the site has written on the internet that the Star of David is a memorial to the Jews who were killed in the destruction of the Jewish quarter, but I don’t know if that is correct, either. If it is, there is no marking in the Church as to why it’s there and you can’t even see it unless you get up on the bimah. In conclusion, I really don’t know the answer of why it is there. (If any of my readers know the answer, please send me a line).

What I do know is that the central market of Nuremberg is drenched with the history of anti-Semitism.

This is the second in a series of articles on Nuremberg based on my three day visit there. The next article will focus on a visit to the Nazi Party Rally grounds of Nuremberg.