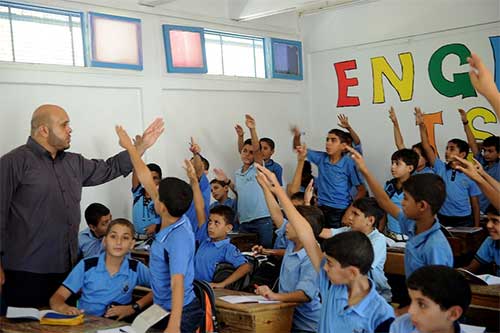 Just before Mr. Bedein showed us two films (in Arabic, with English voiceover and Hebrew subtitles) of how and what the United Nations Relief and Works Agency for Palestine Refugees (UNWRA) teaches in the schools it operates in refugee camps, he distributed a map. The map is published by an organization in Bethlehem and entitled “Map of Palestine 1948: Depopulated Villages and Towns” with the subtitle “Al Nakbeh.”

I assumed this meant that there were BDS supporters in the audience but in fact, it was the speaker who was distributing the maps. In fact, it was the speaker who had procured the maps from the PLO Bookshop in East Jerusalem! Interestingly, the maps show masses of alleged Arab villages (some of them marked Khirbet which means they were abandoned ruins even in 1948) in the centre of the country, but hardly any villages in the West Bank where it depicts the Jewish settlements. These clearly illustrate the insignificance of the Israeli settlements in the West Bank and how little they impinge on the local Arab population (except in Hebron, where Jews have every right to be).

David Bedein’s talk was an exposé of UNWRA and the way it operates not just in the Arab refugee camps in the Arab world, but in Arab refugee camps that are under Israeli control! The two films he showed included excerpts from lessons, songs, poems and interviews with teachers and children, all advocating one thing – a holy war of extermination against “the Jews” (not one of those in the film ever referred to the Israelis as anything but “the Jews”), heralding the Right of Return (return to a pre-1948 but Jew-free Palestine).

UNWRA is a United Nations-backed organization founded in 1949 specifically to care for Arabs displaced in 1948. It receives a budget of US $1.2 billion-not from Arab potentates in the oil-rich states (unlike the claims made on its website), but from the West – from the USA and the European Union! The website boasts of a huge donation recently made by Liechtenstein.

This budget is spent mainly on “education” for teaching Arab children to hate and kill “the Jews”, as a result of which large numbers of terrorists have graduated from these schools, who have been responsible for thousands of murders. There are even head teachers who were known terrorists. UNWRA runs a network of schools and summer camps in refugee camps throughout the Arab world, including in Qalandiya and Shuafat, in East Jerusalem,and in areas under Israeli control.

UNWRA has declared that, unlike any other refugees, Palestinian refugees (as they have called themselves since 1967) are refugees in perpetuity, meaning the actual refugees, their children and their childrens’ children, ad infinitum have the unassailable right of return. While exact statistics for the 1948 population of Palestine are hard to come by, there are believed to have been equal numbers of Arabs and Jews, 650,000 in each case. Yet today UNWRA claims responsibility for five million refugees!

One astonished member of the audience asked David Bedein how he and is crew were able to film such a damning and appalling exposé. He explained that, like many criminals, the teachers and their pupils are totally unaware and unconscious that what they are teaching and repeating is unspeakably dreadful and that to indoctrinate young children to glory in bloodlust is something to which even the Nazis did not stoop. Consequently, they were quite happy to welcome Bedein and his camera crew into the schools and other educational facilities.

David Bedein is trying to raise awareness of this situation and above all to raise awareness of it among Jewish donors to Arab causes and to the Israeli government officials who turn a blind eye to it and allow it to continue even in territory controlled by Israel. UNWRA is apparently asking for its budget to be doubled, and he is determined that its true motives are known to those to whom the organization is extending its begging-bowl. He also pointed out something that is not widely known – the two new cities being built in the West Bank by the Palestinian Authority used pictures of downtrodden refugees in the camps to raise money for the projects. But the Palestinian Authority has banned refugees from living in the new cities!

As long as the refugees are forced to live in poverty and denied a decent standard of living and continue, through a United Nations-funded organization, to be taught violence, Israel will never be safe-but neither will the rest of the Arab world, which will continue to tear itself apart.