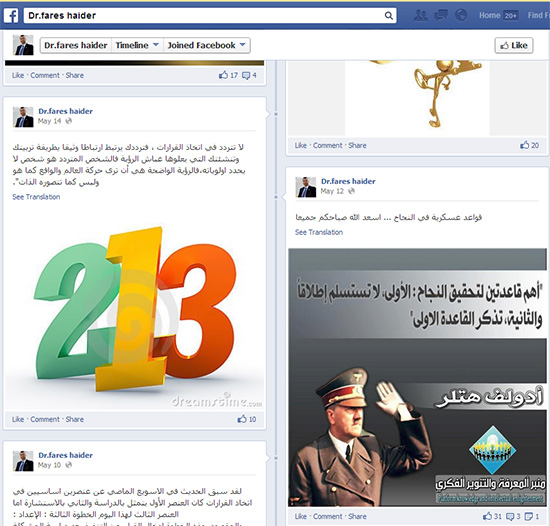 The UNRWA education for half a million students focuses on teaching the “armed struggle” to liberate Palestine, all of Palestine, under the promise of “right of return” and the premise that Jews have no place to live in any part of Palestine.

In that context, our agency issued in a formal letter of complaint filed with CFID, the British government agency that provides assistance to UNRWA.in a document which cites the incitement in the official UNRWA textbooks,

In addition, our agency dispatched a TV crew to report on the summer camp season of UNRWA, where UNRWA students learn the “values” of Jihad, Right of Return amd Martyrdom. Our agemcy’s short documentatry about UNRWA summer camps, entitled CAMP JIHAD, can be viewed at

Now, with the new school year for UNRWA in the offing, one should not underestimate the power and influence of social media on the life and attitudes of UNRWA students.

In that context, the dean of UNRWA education in Jordan Dr. Fares Haider posted a portrait of Adolf Hitler on the home page of his facebook page, and widely distributed his Hitler page throughout the UNRWA school system.

Here is the citation from the facebook home page of Dr. Fares Haider with the following inscription next to Hitler’s portrait:

“The two most important rules for achieving success:

The first: Do not surrender absolutely.

And the second: Remember the first rule.

Below that you will find a title in Arabic which is translated into English correctly:

“The Platform of Knowledge and Intellectual Enlightenment”

Then you will find the name of Dr. Fares Haider in English and underneath the following words in Arabic:

“Military rules of success… Good morning to you all”

What the previous pages on the left read,

“Do not hesitate to make decisions. Your hesitation is strongly connected to the manner of your education and upbringing which is overwhelmed by unclear sight. A hesitant person is a person who does not define his priorities. A clear vision is that you see world’s movement and reality as they are and not as one imagines.”

“Last week’s previous discussion was about two fundamental elements in [the field of] decision making. The first element was represented by examination, and the second one – by consultation. As for the third element for today, the third step: preparation:…”

​Center for Near East Policy Research - October 19, 2021
Arab photojournalists on location at the UNRWA refugee camp in AIDA in Bethlehem in October 2021