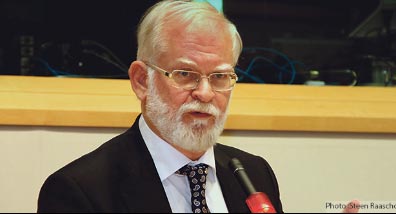 Lars Hedegaard, executive editor of DispatchInternational in Copenhagen, published an editorial today expressing outrage about the lack of police responses to death threats he and others have received for exercising their precious rights of free speech criticizing a religion. The editorial was prompted by death threats from Danish and foreign Muslims against Hedegaard and five colleagues. These threats arose from the press conference arranged by The Danish Free Press Society (DFPS) with ex-radical Danish Imam, Ahmed Akkari, last week in Copenhagen. Akkari revealed that virtually all Danish Mosques are led by extremists. Akkari went through a personal transformation through self-introspection prompted by reading a veritable bibliography of Western Enlightenment during long arctic winter nights in Greenland.

Akkari, the ex-Imam, knows a thing or two about radical extremists running Mosques. He was one. Akkari and another Danish Imam fanned the flames of the Danish Mohammed Cartoons across the entire Muslim Ummah in 2006. Their efforts resulted in riots and protests, scores of deaths, destruction of properties and businesses, and closing of Danish and other Western embassies around the globe. So, having seen the light, he was a great catch for Hedegaard and his doughty band at the DFPS to present Akkari in his news guise as a former Muslim who elected to leave Islam by choice.

We have interviewed other stalwarts in the counter -jihad movement who have been threatened with death and were victims of murder attempts. Among those in my collection, The West Speaks , are the Hon. Geert Wilders of the Freedom Party (PVV) in The Netherlands, Swedish Artist, Lars Vilks and Danish political Cartoonist, Kurt Westergaard. Westergaard was attacked in his home in Denmark by a raging Somali wielding an axe. The assailant relentlessly hacked away at a steel door between him and Westergaard until apprehended by the Danish Intelligence and Security Police (PET). All because Westergaard had exercised his free speech penning the most publicized of the Danish Mohammed Cartoons, the one depicting the Prophet wearing a bomb shaped turban with a lit fuse. Akkari has since met with Westergaard and apparently apologized for his previous radical activities that cause death threats resulting n 24/7 Danish PET protection for Westergaard.

What Hedegaard and other counter-jihadists in the EU, like Elisabeth Sabaditsch -Wolff in Vienna, are doing is exercising their free speech. They are respectfully informed their fellow countrymen and its political establishment, that human rights, liberty and basic freedoms are being suborned by threats from the Muslim émigré community and abroad. These Muslim communities in Dar al Hijrah-the place of immigration- are the contemporary equivalent of the barbarians inside the gates that lead to the downfall of the Roman Empire. A fellow Dane who knows that first hand is Nicolai Sennels. He is a psychologist who wrote a book published by Hedegaard, Among Criminal Muslims. The book was based on his professional work at a Copenhagen municipal lockup. Sennels wrote in a May 2010, New English Review article, “Muslims and Westerners: The Psychological Differences” about the dangers that he, Hedegaard and all Westerners face from intolerant Muslims who reject them:

Since the Muslim world is already here – in thousands of Muslim ghettoes in Europe, Australia and North America – the possibility that violent conflict will happen in Western cities all over the world is very great.