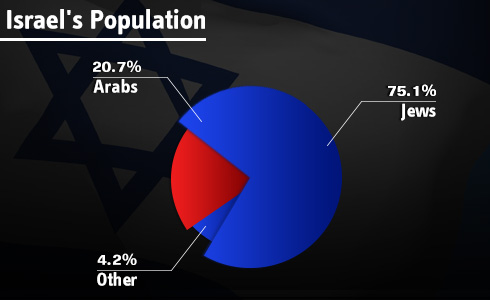 The data indicate that 75.1% of the population are Jews, 20.7% are Arab; and 4.2% are “others,” which include Christian Arabs, other religions and those listed with no religious affiliation at the Interior Ministry. Since Rosh Hashana in the previous year, the CBS reported that Israel’s population grew by 1.8%, a figure similar to previous years. Data from the Population, Immigration and Border Authority shows that over the past year, 160,749 babies were born – 82,437 boys and 78,312 girls. The most popular names were Itay, Daniel, Ori, Yosef, and Noam for boys; Noa, Shira, Tamar, Talia and Yael for girls.

The number of new immigrants, according to the Immigration Authority at the Interior Ministry was 16,968. The survey also shows that through the year’s end, 127,052 Israelis wed and 29,616 divorced.

According to the Immigration Authority, there are 8,730,562 registered Israelis in total. The gap in numbers between those of the CBS and the Interior Ministry is most likely due to Israelis currently living abroad, who are counted in Interior Ministry data, but are not included in CBS statistics.

Yaron Druckman contributed to this report