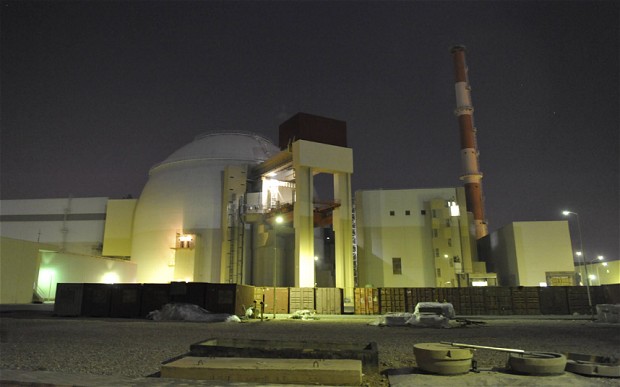 Tomorrow morning, more than seven years after the United Nations Security Council first ordered Iran to halt all aspects of its illicit nuclear programme, British and American diplomats – along with representatives of other global powers – will sit down with Iranian nuclear negotiators in Geneva to try, once again, to resolve this crisis. This could be a seminal moment in world history – for what we choose to do about Iran will have consequences for generations.

In the run-up to the negotiations, there has been much talk of a new spirit of détente between Iran and the West. The election of President Hassan Rouhani in June has been followed by a series of diplomatic overtures, including a meeting between the British Foreign Secretary, William Hague, and his Iranian counterpart. There have even been discussions about Britain and Iran reopening embassies in each other’s capitals.

We would all welcome a genuine agreement that ensured Iran would never be a threat to our security. But at such an extraordinarily important moment, it is vital that both the British and the American governments remain clear-eyed about the nature of that regime and its nuclear ambitions.

As a committed Anglophile, who studied at the London School of Economics and worked in the House of Commons during the Thatcher revolution, I have always been an admirer of your country. Winston Churchill, whose portrait hangs in my office, remains a personal hero. And I would urge the Prime Minister and Foreign Secretary to hearken back to one quote of his in particular.

On October 5 1938, Churchill rose in the House of Commons to speak about the agreement Neville Chamberlain had reached with Adolf Hitler in Munich. In explaining his opposition to appeasement, Churchill quoted the Anglo-Saxon Chronicle from 1,000 years before, on the payment of Danegeld: “All these calamities fell upon us because of evil counsel, because tribute was not offered to them at the right time nor yet were they resisted; but when they had done the most evil, then was peace made with them.”

Is Britain at risk of making the same mistake again? To answer that, we need to outline Iran’s primary objectives. First, its Supreme Leader, Ayatollah Ali Khamenei, wants relief from the economic sanctions imposed by our nations and others, in order to secure his hold on power. The Islamic Republic remains a brutal dictatorship that persecutes and tortures its own population. In a society of young people who do not share the mullahs’ radical Islamist vision, the Supreme Leader knows his regime cannot remain in power for long if the economy continues to deteriorate.

Second, Ayatollah Khamenei wants to build and maintain a nuclear weapons capability – not to construct an atomic device immediately, but to have the technical ability to do so at a moment of his choosing. Such a capability might include the ability to produce weapons-grade uranium, the ability to produce plutonium, and the ability to launch missiles capable of travelling long distances with heavy payloads. If it possessed this, the Islamic Republic would gain enormous leverage over the West – further emboldening the world’s leading state sponsor of terrorism to expand its sphere of influence.

Iran’s leaders are not stupid. They read the British papers and they study public opinion surveys. They know that the public in Britain – after more than a decade at war, and in the wake of a deep global recession – dearly wants to avoid another conflict in the Middle East. And they also know how Western politics works: that British or American leaders must be able to bring home some sort of face-saving concession, even if that concession is completely superficial.

We should therefore expect that Iran will seek to negotiate an agreement that fulfils its two primary objectives, while at the same time offering superficial concessions to help the Prime Minister (and, indeed, President Obama) sell the deal back home.

What might such an agreement look like? It could emerge as an Iranian commitment to suspend its enrichment of uranium at 20 per cent (a stepping stone to the 90 per cent threshold needed to construct a nuclear device) and even close down its Fordow fuel enrichment facility near Qom. In exchange, it would receive some package of sanctions relief and an ambiguous recognition of its right to access peaceful nuclear energy – that is, tacit approval of future uranium enrichment at 3.5 per cent.

Such an agreement might sound appealing. But a closer look reveals that both of these concessions are almost irrelevant, compared with the fundamental dangers posed by Iran’s nuclear programme as a whole.

With the installation of advanced centrifuges at Natanz – with an output four to five times greater than the basic centrifuges used at Fordow – Iran could agree to suspend all enrichment at the Fordow facility and still be in a position to produce weapons-grade uranium without detection by the middle of next year. Separately, if the regime is allowed to bring online its heavy water reactor in Arak, it could establish an alternate pathway to a nuclear bomb, producing enough plutonium each year for one or two nuclear weapons.

Meanwhile, according to official US estimates, the Islamic Republic could flight-test an intercontinental ballistic missile capable of reaching both sides of the Atlantic by 2015. And lest we forget, it remains the world’s leading sponsor of terrorism. It serves as a critical facilitator for alâ€‘Qaeda, was responsible for last year’s terrorist attack in Bulgaria, which killed five Israeli tourists, and has played a key role in propping up the murderous regime of Bashar al-Assad.

So when negotiations with Iran begin tomorrow, it is no exaggeration to say that David Cameron must choose between two Conservative legacies – that of Winston Churchill, or that of Neville Chamberlain.

The first of this pair would call the offer on the table at Geneva what it is – appeasement. He would opt to maintain maximum economic pressure on the Iranian regime until its Supreme Leader fully dismantles his entire nuclear programme and ends his global sponsorship of terrorism. He would not trust a barbarous dictatorship which, as he said in that 1938 speech, “derives strength and perverted pleasure from persecution”.

Chamberlain, by contrast, would see a nation turning inward after years of war abroad and economic stagnation at home. He would agree to provide Iran with sanctions relief in exchange for superficial, face-saving concessions that would leave its rulers with the capability to pursue a nuclear breakout in the future. To paraphrase Churchill, he would choose dishonour and inherit war.

Seven years ago, the Security Council ordered Iran to halt its entire nuclear programme. We should not change course now and reward the Islamic Republic for agreeing to do something far less. In 1938, Churchill used the perfect metaphor to describe the lunacy of such diplomacy: “£1 was demanded at the pistol’s point. When it was given, £2 were demanded at the pistol’s point. Finally, the dictator consented to take £1 17s 6d and the rest in promises of goodwill for the future.”

My colleagues in the US Senate and I will not be fooled by hollow declarations of “peace for our time”. We will not accept any level of uranium enrichment on Iranian soil. We will not accept an Iranian plutonium reactor. And unless we see Iran take immediate steps to comply with all its Security Council obligations, we will move forward with a new round of sanctions targeting all remaining Iranian revenue and reserves.

For Britain’s sake, for America’s sake, and for the world’s sake, I pray that the Prime Minister stands with us, and rejects the policy of appeasement being peddled in Geneva.

Mark Kirk is a Republican Senator for Illinois, and the primary co-author of US sanctions against Iran