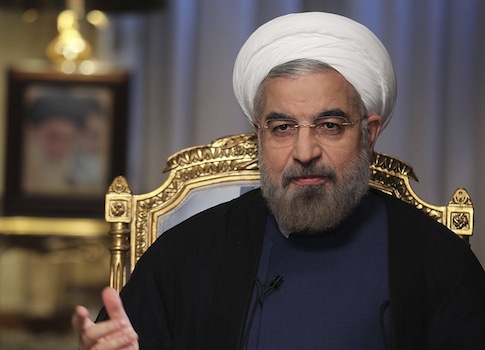 A network of pro-Iran advocates are uniting behind a new campaign aimed at killing bipartisan legislation meant to increase sanctions on Tehran should it cheat on a recently inked nuclear accord.

The latest bid to kill sanctions in Congress is being led by the Iran Project, a little known group that is deeply tied to, and funded by, some of Tehran’s top U.S. advocates.

The Iran Project went live on Monday with an anti-sanctions letter signed by a who’s who of liberal former U.S. officials, many of whom have long advocated to roll back sanctions on Iran and increase diplomacy with the rogue regime.

The letter, which quickly gained traction in some foreign policy circles, urged Sen. Bob Menendez (D., N.J.)-one of the chief architects of the new Iran sanctions bill-to back off his bid and let the bill die.

Liberal outlets such as the Huffington Post and others have also gone after Menendez in a bid to force him to abandon the bill, which is hotly opposed by the White House but supported by 48 senators.

The Iran Project claims that the new sanctions bill would “move the U.S. closer to war” with Iran.

The missive is signed by former ambassadors Thomas Pickering and Ryan Crocker as well as by former National Intelligence Officer Paul Pillar and several other foreign policy experts known for taking a soft line on Iran.

Pickering and Crocker in particular have been outspoken opponents of sanctions, while Pillar has accused pro-Israel groups of “sustaining” Iran’s nuclear program.

“We urge you to take a second look at this legislation, accept that you have achieved your objective of putting down a marker for Iran, but not press this bill to a vote,” the letter states. “You do not sacrifice any of your options by doing so. Negotiators now need a chance to continue to their work.”

The Iran Project, which bills itself as “dedicated to improving the relationship between the U.S. and Iranian governments,” is part of a large network of pro-Iran groups pushing to kill new sanctions and increase diplomacy with Tehran.

Ploughshares has encouraged its allies and funding partners to work against sanctions measures like the one currently up for debate in the Senate.

Pickering, who is also one of the Iran Project’s founding members, serves on NIAC’s advisory board.

Ploughshares has touted the Iran Project’s work on multiple occasions, referring to it “as a group of highly respected national security experts and former U.S. government officials.”

“The reports released by the Iran Project are very influential among decision makers in Washington,” NIAC wrote of the group in April.

Iranian state media organs such as Press TV have celebrated The Iran Project’s work in the past.

Foreign policy observers have pointed out that this tightly organized group of Iran advocates has launched similar anti-sanctions campaigns in the past.

“These are many of the same foreign policy experts who opposed the toughest Iran sanctions that got us to this point,” Mark Dubowitz, executive director of the Foundation for Defense of Democracies (FDD) tweeted on Monday.

Others cautioned against taking seriously this latest anti-sanctions lobbying bid.

“This is a group run by people who support Iran, are celebrated by the Iranian media, and are deeply embedded in a network of organizations that have consistently sought to weaken the U.S.’s leverage in attempting to denuclearize Iran,” said one senior official at a Washington-based pro-Israel group.