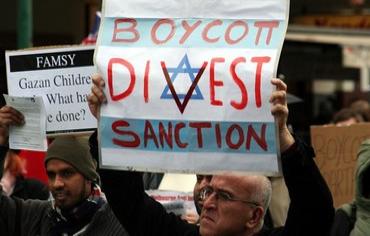 The Modern Language Association (MLA) whose brief is words, sentences, paragraphs, stories and narratives, has a special responsibility to lead the way in examining the effects of exposure to cradle-to-grave incitement -the abuse of words. Word Pollution is pandemic in the Mideast.

Such incitement -the 6 D’s of dehumanization, demonization, delegitimization, disinformation, double standards, and denial of past genocides perpetuates the motifs of hate, revenge, death and destruction. Such incitement is the most hazardous environmental exposure in the Mid-East.

Ever since the Holocaust and the Rwandan Genocide, there is strong circumstantial evidence for the cause-effect relationships between constant exposure to words of incitement and hate – in the public square, school texts, the printed media, radio and television,]and places of worship — and numbers of persons killed, maimed and injured in acts of terror. Those who monitor Word Pollution report that Jihadist genocidal anti-semtiism, recycling centuries old motifs of hate, and the motifs of Mein Kampf, are increasing in the Palestinian Authority. It is noteworthy that such incitement has increased since the release of Palestinian terrorists, and the resumption of negotiations under the auspices of Secretary of State John Kerry.

Those who know something about the history of such incitement know that such incitement predates the establishment of the State of Israel, and bears no relationship whatsoever to Israeli presence in the Administered Territories. And, in all fairness, it is not confined to the Palestinians. It is worse in Iran, Iraq, Syria and Egypt, and even Jordan. But the MLA, foolishly has decided to imitate the hapless Association for American Studies and call for an academic boycott of Israel. MLA should follow the recent example of the 200 member Executive Council of the American Public Health Association which, in November, decisively rejected-by a crushing 3 to 1 margin a resolution calling for disinvestment in Israel–as Judy Siegel of the JP reported.

I was at the APHA convention, and saw how the members of this Council, who one year earlier, voted 50-50 on an earlier BDS resolution, changed their minds when a few of us hit back hard with massive documentation of the falsehoods, lies and disinformation of its sponsors. Both the defeated APHA draft resolution, which recommended censure of Israel, and the MLA draft resolution contain fundamental errors of commission and omission.

Like the defeated APHA resolution, the MLA resolution ignores (1) the public health impacts of war and refugees worldwide as well as the spillover from the chaos, violence, brutality and mass atrocities in Syria and migrations from Sudan into Israel via Sinai (2) the fact that all the universities in the West Bank and many in Gaza were established with the encouragement and support of the Israeli government after the Six Day War of 1967 (3) the long history of formal and informal collaboration between many Israeli and Palestinian researchers and their students in service, training and research (4) pressures, threats and intimidation from the PA itself directed against such cooperation (5) substantial Israeli-Palestinian collaborations and Israeli contributions to progress in public health, preventive medicine, water and sanitation, nutrition, agricultural irrigation, immunization — notably polio, detection and prevention of lead poisoning, and medical care and education and training (6) the scope and consequences of the negative effects of a decade of missile attacks – over 13,000 since 2000, terror and incitement by Hamas, and elements in Fatah –intentionally directed at Israeli civilians – Jews and Arabs alike.

But most of all, the MLA draft resolution ignores (7) the crippling intergenerational effects of Word Polluton–incitement to violence on mental health and development, notably among the young, who are more vulnerable than adults.

MLA‘s interest is in promotion of scholarship and research on modern languages. MLA has a proud history of recognizing the right of all individuals to celebrate their cultures through the study and dissemination of their languages and literatures. But it has been silent on the use of words to incite and foment hatred. In short, MLA’s silence on such incitement makes it a complicit bystander to such evil.

This silence is disgraceful. MLA has a special responsibility to promote the use of words sentences, paragraphs, stories and narratives to celebrate respect for life and the human dignity of the other. MLA should advocate a policy of Zero Tolerance for Incitement and promote initiatives to translate this policy into practice. So far it has neglected to do so. Its silence on Word Pollution is disgraceful. It should redefine Word Pollution as an unacceptable, just as public health doctors and scientists have done so with air and water pollution.

The proposed MLA Resolution, if adopted, will destroy MLA’s creditibility. It will undermine any attempt to put substance into any so-called peace process.