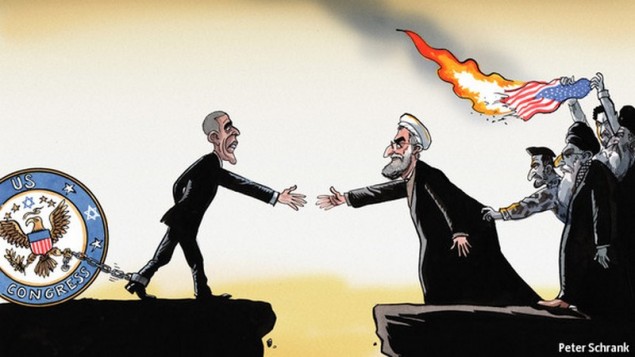 The Economist removed a controversial cartoon which observers blasted as anti-Semitic.

The cartoon depicts US President Barack Obama, shackled by a seal of Congress overlaid with Stars of David, trying to shake the hand of Iranian President Hassan Rouhani, who is being held back by American flag-burning extremists.

It had accompanied an article published at the weekend that described the deep rifts between the US and Iran in negotiations over the Islamic Republic’s nuclear program.

As of Monday, the cartoon had been replaced in the article page with a photo.

It remained visible on the Middle East and Africa section of The Economist website until late Tuesday morning, but was then replaced there too.

An editor’s note at the bottom of the article referred to the illustration, by Peter Schrank: “The print edition of this story had a cartoon which inadvertently caused offense to some readers, so we have replaced it with a photograph.”

Readers were quick to criticize The Economist for the cartoon’s publication, blasting editors for not recognizing it as an anti-Semitic or anti-Israeli display.

The implication, critics said, was that Jews control the US Congress, or that the legislative body functions under the direction of Israel. With the Stars of David superimposed over the Congressional seal being blue, the connection to Israel did not go unnoticed.

Honest Reporting, an NGO that monitors anti-Israel content in the media, issued a statement criticizing The Economist’s editorial staff for not picking up on the fact that the cartoon promoted anti-Semitism.

“Jewish control over governments, the media and the international financial system is a classic feature of anti-Semitism and the cartoon is, wittingly or unwittingly, promoting this trope,” the statement read.

“This falls firmly under the working definitions of anti-Semitism from both the US State Department and the EU, which specifically include: ‘Making mendacious, dehumanizing, demonizing, or stereotypical allegations about Jews as such or the power of Jews as collective – such as, especially but not exclusively, the myth about a world Jewish conspiracy or of Jews controlling the media, economy, government or other societal institutions.’”

ADL National Director Abe Foxman said in a statement, “The Economist cannot repair the damage of publishing an anti-Semitic image with only half-measures. They owe their readers a full-throated apology, which not only acknowledges the offensive nature of the cartoon but explains to readers why this image implying Jewish control was so outrageous and hurtful.”