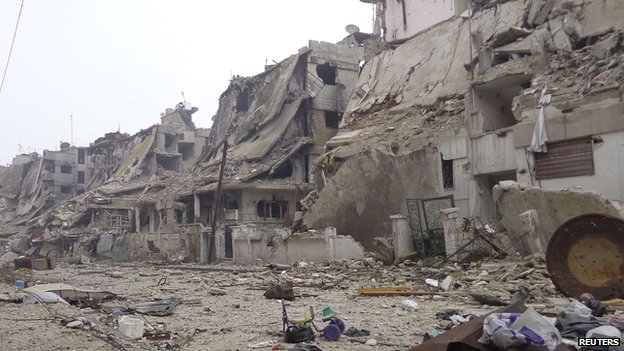 A photo of Homs in Syria from January 2013. Today, Homs and other Syrian cities look even worse.

“WHY DON’T THEY LEARN FROM THE ISRAELI ARMY WHICH TRIES, THROUGH GREAT EFFORTS, TO AVOID SHELLING AREAS POPULATED BY CIVILIANS IN LEBANON AND PALESTINE?”

I attach a remarkable new video from Al-Jazeera (the Arabic version of al-Jazeera) in which the presenter asks his audience why Arab armies (and in particular the Iranian proxy organization Hizbullah) can’t act in a more humane way to civilians, like the Israeli and French militaries do. (The guest in the video on the right, Mr Muhammed, also agrees with him.)

Among the questions posed on air:

“Why don’t they learn from the Israeli army which tries, through great efforts, to avoid shelling areas populated by civilians in Lebanon and Palestine? Didn’t Hezbollah take shelter in areas populated by civilians because it knows that Israeli air force doesn’t bomb those areas? Why doesn’t the Syrian army respect premises of universities, schools or inhabited neighborhoods? Why does it shell even the areas of its supporters?…

“I will also give you the example of France. All Syrians remember that the French forces, when they occupied Syria tried to avoid, when rebels entered mosques or schools, they stopped. The people would prefer that France come back! For god’s sake, if a referendum were to be held… if people were to be asked, who would you prefer the current regime or the French, I swear by God they would have preferred the French.”

“The Israeli army, if it wanted to break up a demonstration, would have used water cannons or rubber bullets, not rockets or explosive barrels as happens in Aleppo today.

You can watch the video below. One wonders when Western news outlets, such as The Guardian and BBC, which day after day single out Israel for denigration, will be as honest as this al-Jazeera anchor and studio guest?

Here are a few of the news sites and blogs that cite or link back to this webpage on Tom Gross Media: