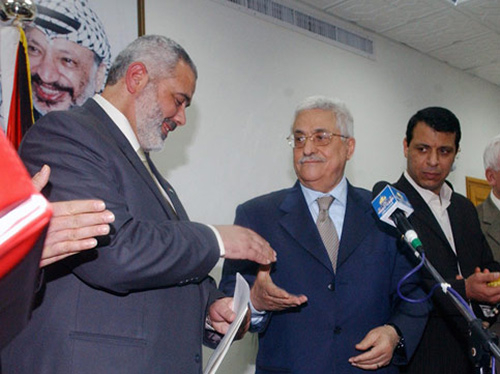 Kerry does not seem to care whether Abbas is a “rightful” president or not. He is so desperate for a diplomatic achievement that he is prepared to ignore fundamental facts. How exactly does Abbas plan to enforce a peace agreement in the Gaza Strip when he cannot even visit his private residence there?

The only way to find out what Palestinians really want is by letting them head to the ballot boxes. Palestinians representing all groups, including Hamas and Islamic Jihad, should be allowed to run.

The next time US Secretary of State John Kerry visits Ramallah, he should not forget to congratulate Abbas on this happy occasion.

The fact that Abbas has is now in his tenth year of his four-year term in office should also serve as a reminder to Kerry that the PA president does not really have a mandate from his people to sign any agreement with Israel.

But he has since used the conflict between his Fatah faction and Hamas as an excuse to remain in power.

Abbas’s critics maintain that his decision unilaterally to extend his term in office violates Palestinian Basic Law. They have also warned that Abbas’s move paves the way for “constitutional and legislative anarchy” in the Palestinian territories.

By remaining in power beyond his term, Abbas has given Hamas and other Palestinians a good excuse to argue that he is in no way authorized to sign a peace agreement with Israel.

“Mahmoud Abbas’s term in office expired a long time ago,” said Hamas spokesman Sami Abu Zuhri. “He has lost his legitimacy. He does not have a mandate to negotiate or sign an agreement.”

What this basically means is that Hamas and other Palestinian groups are not going to accept any deal between the Palestinian Authority and Israel, even if it includes far-reaching concessions on the part of Israel.

Abbas was recently quoted as saying once again that any deal he signs with Israel would apply not only to the West Bank, which is under his control, but to the Gaza Strip as well.

One can understand why Abbas is speaking on behalf of his constituents in the West Bank. But how exactly does Abbas intend to enforce a peace agreement in the Gaza Strip when he cannot even visit his private residence there?

While some may argue that Abbas has some legitimacy among Palestinians in the West Bank, especially in light of Fatah’s control over the area, it is hard to say that he has much following in the Gaza Strip, which remains under the tight grip of Hamas and its allies. It would have been better had Abbas called new presidential elections before the resumption of the peace talks with Israel. Such a move would have embarrassed Hamas and probably forced it to comply.

But as of now it seems that neither Abbas nor Hamas is interested in holding new elections for the presidency or the legislative council. The status quo, where each side has full control over a mini-state (Fatah in the West Bank and Hamas in the Gaza Strip) appears to be convenient for both parties.

However, the need for such elections has become imperative in wake of Kerry’s relentless efforts to achieve an “historic” agreement between Israel and the Palestinians.

The only way to find out what Palestinians really want is by allowing them to head to the ballot boxes. Palestinians representing all groups, including Hamas and Islamic Jihad, should be allowed to run in such an election.

A victory for the radicals would mean that a majority of Palestinians do not want peace and continue to dream about the destruction of Israel. If Abbas and his political allies win, that would be great news for the peace process and Kerry’s efforts to achieve a two-state solution.

Yet Kerry does not seem to care whether Abbas is a “rightful” president or not. He is so desperate for a diplomatic achievement that he is prepared to ignore fundamental facts.

How can Kerry expect Abbas to sign any document declaring the end of the conflict with Israel when many Palestinians are already pointing out that their president does not even have a mandate to act or speak on their behalf?