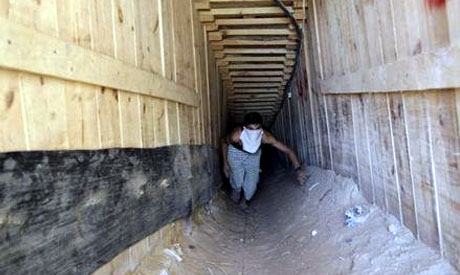 The Egyptian army has destroyed eight more tunnels used for smuggling along the border with the Palestinian Gaza Strip, an army spokesman said on Sunday.

Almost 1,300 tunnels have been destroyed since January 2011.

Few of the hundreds of tunnels running under the border, which the authorities say are used by militants in Egypt and the Palestinian enclave to smuggle weapons and insurgents, are still open.

The demolition campaign has sparked alarm in the Gaza Strip which heavily relies on the underground tunnel network to smuggle goods, including building material and fuel, into the area which has been blockaded by Israel since 2006.

Egypt says the closing down of the tunnels, which started over a year ago and a half, is part of a crackdown against Islamist militants in the border Sinai Peninsula who authorities say have links to extremists in the Palestinian territory.