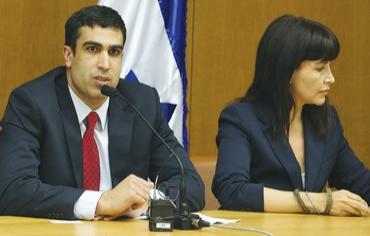 Chetboun opened the event by describing a recent visit to a tunnel built by Hamas “with concrete and cement that had been delivered to UNRWA by donor countries” that was used by terrorists and screened examples of incitement shown to children in UNRWA schools.

“This bile is being financed by the countries you represent,” Chetboun said. “Irrespective of how the current negotiations between Israel and the Palestinians are viewed, everybody can agree that the future does not bode well if the next generation is consistently exposed to ideas that would not be out of place in 1935 in Berlin.”

“Would you tolerate this state of affairs in your own countries? Is it not reasonable to suggest that the aid the world sends should not enable the hate which is the cause of this incitement and terrorism in the first place?” the Bayit Yehudi MK asked the representatives from the embassies of the EU, UK, Canada, Norway, France, Turkey, Argentina, Costa Rica, Chile, Belgium, Bulgaria and the Philippines.

UNRWA is the UN agency dealing with Palestinian refugees and their descendants, as opposed to the UN High Commissioner for Refugees, which deals with all other refugees in the world. UNRWA registers the children and grandchildren of refugees as refugees, as opposed to the policy maintained in other conflicts.

Wilf, a Senior Fellow of the Jewish People Policy Institute with a PhD in Political Science, said that the word “refugee” is being misused by UNRWA and that “words matter in this conflict.”

“Where do Palestinian refugees in Gaza expect to go? Why are middle-class families in Ramallah called refugees?” Wilf asked. “It makes no sense to argue that people who were born and are living in Palestine are refugees from Palestine.”

“Most of the world’s population is descendant from refugees. People should stop saying refugees and start saying descendants,” she added.

Wilf said that UNRWA refuses to release numbers on how many people are refugees and how many are descendants and called the agency’s insistence on putting everyone under its care under one category a political decision.

According to Wilf, UNRWA’s mandate allows it to provide services to refugees and descendants. As such, the only reason to call descendants refugees is to inflate the number of actual refugees from the tens of thousands to millions.

“Perpetuating [Palestinians’] refugee status is an obstacle to peace and Western policies allow it to continue,” she said.

In an expert opinion Wilf submitted to the UK Parliament, and obtained by The Jerusalem Post, she wrote: “If millions of Arabs who are citizens of Jordan and the Palestinian Authority, or inhabitants of Syria and Lebanon, claim to be refugees from what is today Israel, even though they were never born there and never lived there, and demand that as a result of this refugee status they be given the right to relocate to Israel, ‘the right of return,’ then the whole basis for peace by means of two states for two people crumbles. If Israel, with its 6 million Jews and more than 1.5 million Arabs, has to absorb between 5 and 8 million Arab Palestinians then the Jews will be relegated again to living as a minority among those who do not view them as equals; the only country in which the Jews can exercise their right to self-determination would be no more. This idea cannot be considered a serious basis for peace among equals.”