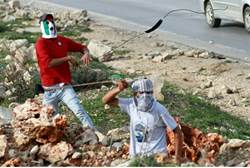 MK Yoni Chetboun (Jewish Home) called a special meeting with over 40 diplomats from dozens of countries Monday to present the hard facts on how Western funds are being used in Palestinian Arab schools funded by the UNRWA.

Chetboun wanted to present to representatives of partner countries funding the UNRWA research findings indicating the extent of anti-Israeli incitement in the educational institutions of the organization and textbooks taught in “refugee camps” in the Palestinian Authority (PA), Gaza and Jerusalem.

Among those attending the event were representatives of the European Union, EU ambassadors, and representatives from dozens of countries, including Britain, Canada, Norway, France, Turkey, Argentina, Costa Rica, Chile, Belgium, Bulgaria and the Philippines.

Dr. Einat Wilf, a researcher into the incitement in the PA “refugee” camps and a member of the 18th Knesset also spoke at the conference. So did Dr. Arnon Gross, who was also involved in researching the content of UNRWA textbooks, and MK Shimon Ohayon (Yisrael Beytenu).

“The world must re-examine the transfer of funds to UNRWA,” Chetboun noted. “It is unclear whether countries have an idea of â€‹â€‹what is done with the money they send.”

“Whether it knows it or not, the UNRWA is undermining the original purpose for its involvement. Instead of providing welfare and aid to Palestinian refugees, it [the UNRWA] funds terror and anti-Israeli propaganda,” he continued. “Is this what the West wants? I doubt it.”

“As a member of the Israeli Knesset, my only interest is the good of the State of Israel,” the MK noted. “It should not matter to us whether the West is aware or unaware of what is happening in the refugee camps. It is our duty to show it to the world. This is incitement intolerable and incomprehensible and we cannot remove it from the agenda.”

Dr. Arnon Gross, who researched the Palestinian textbooks, described to the assembly what he saw. “There are three basic principles which underlie the Palestinians’ propaganda,” he noted. “[First,] delegitimizing Israel. They do not recognize our existence at all.”

“[Second], demonizing Israel and the Jewish people,” he continued. “All the sufferings of the Palestinian people in all arenas of life they blame on the ‘Israeli occupation’ – not one that began with the six-day war, but one that began in 1948.”

He added that “the third basic principle is the call for an armed struggle for the liberation of Palestine. “In Palestinian textbooks, the ‘right of return’ is a romantic idea and through delegitimizing and demonizing Israel they make it a real aspiration [for these children],”Gross said.

Gross added that “there is a tradition of hate and incitement that passes from generation to generation,” and concluded that “for over sixty years, UNRWA has been operating in the refugee camps, providing educational services that help spread anti-Israel propaganda which is diametrically opposed to the stated purposes of the organization.”

The UNRWA, the UN relief agency for Palestinian Arab “refugees,” were established in order to tackle the problem of “Palestinian refugees,” and provides them with shelter, education, health and social services.

The organization provides medical care, education, food and clothing in 59 Palestinian “refugee camps” in the PA, Gaza, Jerusalem, Jordan, Syria and Lebanon. About 23,000 people work for the UNRWA – most of them Palestinian Arabs and some known Hamas activists.

UNRWA’s schools serve almost half a million Palestinian Arab students, according to a recent estimate. According to reports from UNRWA, the annual budget that the organization lays out for Palestinian Arab education in the refugee camps is estimated at half a billion dollars, and the primary sources of this financing are funds transferred from the UN, EU, â€‹â€‹US, UK, Canada, Norway, Sweden, Saudi Arabia, Japan, Germany and Australia.

“Western countries are funding the incubators of terrorism, and it must stop,” Chetboun warned Monday.

Another issue was the question raised over what defines a “refugee.” Former MK Dr. Einat Wilf spoke of what she called “the West’s double standards.”

“I come from the liberal left. I believe in and seek peace based on the idea of â€‹â€‹the two-state solution,” Dr. Wilf noted. “Western countries believe that peace based on the principle of two states for two peoples believe, on the one hand, that Israel cannot continue to build settlements but are fine with the Palestinian Arabs expanding their ‘refugee camps’ on another.

“A child born in Gaza cannot be termed a ‘refugee’ from Ashkelon,” Dr. Wilf noted. “It’s really a double standard.”

MK Shimon Ohayon added that the notion of Palestinian ‘refugees’ is absurd so many generations after Israel was established.

“If we speak about refugees, then how do we calculate Jewish refugees from Arab lands, who have not demanded compensation even 200 years later?” Ohayon asked.