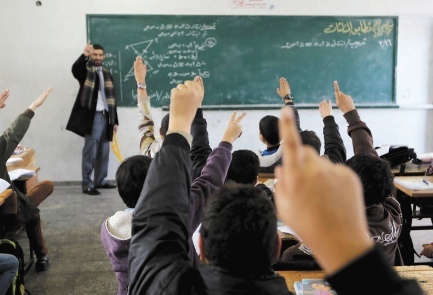 A recent study of 150 new Palestinian Authority textbooks used by a U.N. educational body reveal widespread delegitimization of Israel and continued calls to use violence against Jews in Israel.

The survey was conducted by the Near East Policy Research Center and led by Dr. Arnon Gross, a professor in Islamic Study and veteran Arab affairs correspondent for Israel Radio. Gross’ survey translated 150 new Palestinian Authority textbooks. The United Nations Relief and Works Agency, which runs 250 schools in the Gaza Strip and 100 in Judea and Samaria, claims there is no incitement in the Palestinian Authority textbooks studied in its schools.

In the books, the center found widepsread delegitimization and demonization of Israel, and a call for violent struggle instead of peace. According to the textbooks, the Jews have no rights to Israel, including to Jewish holy sites, and are not considered legitimate residents of the country. The name “Israel” appears less than a handful of times on the maps and is usually replaced with Palestine, and areas inside pre-1967 Israel are described exclusively as Palestinian.

The center sent a letter to UNRWA asking it to correct the deficiencies, including: correcting maps to show current borders and mark the land inside the pre-1967 borders as Israel; showing Jewish cities as well as Palestinian ones in maps; recognizing sites holy to Jews in discussions of holy sites; mentioning in demographic discussions the millions of Jews who live in Israel; removing sections that demonize Israel or Jews, and removing violent struggle as a solution.

Meanwhile, students at Sapir College in Sderot were up in arms over recent remarks made by Tel Aviv University Professor Yehuda Shinhav. “I as a Jew, oppose the idea of having a Jewish nation. It will be the Jewish apocalypse in the long run because we arrived here through violence,” Shinhav said during a conference at Sapir.

Matan Peleg, chairman of right-wing organization Im Tirtzu, called on Sapir “to do some soul-searching.” Sapir College released a statement saying that Shinhav does not represent the college’s views. Tel Aviv University had no comment.