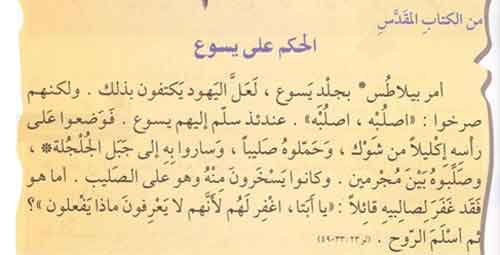 “From the Holy Bible

Pilate ordered to flagellate Jesus so that the Jews may be content with that. But they shouted: ‘Crucify him, crucify him’. He then delivered Jesus to them. They put on his head a wreath made of thorns, made him carry a cross, walked him to Mount Golgotha and crucified him between two criminals. They were mocking him while he was on the cross. Yet he forgave his crucifiers saying: ‘O my Father, forgive them, for they know not what they do’ and then he gave up the ghost. (Luke 23: 33-49 [should be 13-46])” (Palestinian Authority Ministry of Education, Christian Education, Grade 2 (2010) p. 59)

The message here is clear: the Jews were determined to kill Jesus Christ to the point of almost forcing the Roman Prefect of the Province of Judea at that time, Pontius Pilate, to crucify him, and fully participated in the execution while expressing to him various kinds of mockery and scorn.

The problem with this description of the Crucifixion, appearing in a Christian Education textbook issued by the Palestinian Authority (PA) for grade 2 students and used in UNRWA schools in the West Bank and Gaza, is its falsity. A quick look at Luke’s Chapter 23 immediately reveals that the word “Jews” is absent there and, instead, one finds “the chief priests, the rulers and the people” (Verse 13) as well as “these men” and “the chief priests” (Verse 23). In other words, this is a clear case of misquotation of the New Testament, with grave implications in terms of propagating hatred and enmity to the “other” on a religious basis. This abuse of the source material may serve as a good starting point for the discussion of the general attitude to Jews in Christian Education textbooks studied in UNRWA schools.

Christian Education is a school subject parallel to the Islamic Education one. It is taught to Christian students in Arab educational systems wherever the number of such students is large enough, as the case is in the PA schools, where Christian Education textbooks are included in the curricula of grades 1-11 (UNRWA schools include grades 1-9 only). These books were initially issued during the PA overall textbook publishing operation during the years 2000-2006 and have been hardly changed ever since. They were written by Christian clergymen, aided at times by lay Christian educators. The whole project was supervised by the “National Team for Christian Religious Education Curriculum”, with the following members: the Anglican Priest Samir Is’eid (he was replaced in 2005 by Priest Fadi Diab), The Greek-Orthodox Father (later – Archimandrite and today – Archbishop) Dr. Atallah Hanna,[1] the Roman-Catholic (“Latin” in local parlance) Father Rafiq Khouri and Father Ibrahim Hajjazin,[2] and the Coptic Father Efrayim Al-Urushalimi. The team worked under the general supervision of the PA Curricula Center.

The books focus on religious matters first and foremost and usually refrain from dealing with current events related to the conflict. Thus, Jews are not mentioned in the books in this context. However, the books do refer in detail to New Testament events, and, to a lesser extent – to Old Testament ones, where Jews are expected to be present. That constitutes a certain problem for the Christian Palestinian writers, because the Palestinian narrative does not generally recognize the continuous Jewish presence in the country in ancient times and stresses, instead, the presence of the “Arab” Canaanites there up to the 7th century Muslim conquest. The solution found for this dilemma: systematic omission in most cases (save for very few exceptions) of the ethno-religious features of the people mentioned in the context of Old Testament events.

That solution creates at times strange texts where important events in Jewish history, such as the Israelites’ Exodus from Egypt, God’s granting of the Ten Commandments, the construction of the First Temple by King Solomon, the destruction of that Temple by the King of Babylon and the Babylonian captivity – are all described as having happened to an unnamed “people” or “inhabitants” (underlined in the following examples):

“…God called him [Moses] to help his people… During his exodus with his people from Egypt… Although God by his grace did not let his people starve or be thirsty, this people… Moses took the Commandments and gave them to the people.” “Solomon built the Temple and completed it… and had with his people a big celebration on the occasion of the end of construction.”

“After King Solomon[‘s death] the kingdom was divided into two parts. Later, the King of Babylon came and captured Jerusalem, destroyed the Temple and the inhabitants were dislodged to Babylon. The people lived long time in exile and when it returned, it lived under foreign rule…”

One gross example of such practice of erasure is the explanation given to the young students about ancient Jerusalem and the Temple. In both cases the Jews are completely detached from their ancient capital and religious center:

“Jerusalem [Urushalim]: A Palestinian city built by the Arab Canaanites (the Jebusites) and named ‘Jebus’ and later ‘Ursalem’ (Urushalim). It was later given many names such as ‘City of Justice’, ‘the Holy City’ and ‘Noble Al-Quds’. But the prevailing name is Al-Quds.”

The Temple: A word meaning ‘the great house’ which serves as a place for worshipping God, like the church today.” Contrary to this general practice, the PA Christian Education textbooks do refer to the Jews by name when the latter’s differences with Jesus and the Disciples are described:

“The Jews observed the holy day of Sabbath having made it a day of rest and prayer on which they prevented all work, including the performance of good deeds. By curing the sick on Sabbath Jesus has taught us that it is our duty to do good on all days, even on Sundays.” (Christian Education, Grade 3 (2002) p. 88)

“…The doors were closed where the Disciples were gathering because of their fear of the Jews….[Question:] The Disciples were in a state of extreme fear and alarm and they closed the doors. Why all that fear?” (Christian Education, Grade 3 (2002) pp. 86, 87, respectively)

“During the Jews’ Passover the Disciple Judas Iscariot delivered Jesus to his adversaries… the priests of the Jews accused Jesus of blasphemy…” (Christian Education, Grade 7 (2001) p. 71)

The quotes presented above clearly show that the PA Christian Education textbooks in use in UNRWA schools, though hardly touching issues related to the present conflict, still feature pieces that severely de-legitimize and demonize Jews. Since UNRWA is bound, as a UN agency, by international standards that prohibit the inclusion of such pieces in educational material, it must clear the books it uses of these improper expressions.

Dr. Arnon Groiss is an Arabic-language journalist who has been working for the Voice of Israel Arabic Radio since 1973. He is also an expert on Middle Eastern affairs having earned his Ph.D. degree from Princeton University’s Department of Near Eastern Studies, as well as an MPA degree from Harvard University’s Kennedy School of Government. Dr. Groiss taught for several years at the Hebrew University in the 1990s and 2000s. Between the years 2000-2010 Dr. Groiss served as chief researcher and, later, as Director of Research at the Institute for Monitoring Peace and Cultural Tolerance in School Education (IMPACT-SE, formerly known as the Center for Monitoring the Impact of Peace – CMIP), a non-political NGO committed to studying the attitude to the “other” and to peace in the Israeli and in other Middle Eastern curricula. During his work there Dr. Groiss studied hundreds of textbooks of various school subjects and authored over ten reports on Palestinian, Egyptian, Syrian, Saudi Arabian, Iranian and Tunisian schoolbooks. The reports are available on the Institute’s Web site http://www.impact-se.org. A summary of his ten-year research of this subject is to be found in “De-legitimization of Israel in Palestinian Authority Schoolbooks”, published in Israel Affairs, Vol. 18 (2012), Issue 3, pp. 455-484, where he compares the PA schoolbooks with other Arab and Middle Eastern ones, including their Israeli counterparts. Dr. Groiss has presented his findings since 2000 to both policy makers and people of the press on numerous occasions in various places, including the US Congress, the European Parliament, the UK House of Commons, the Israeli Knesset, the Canadian Parliament, the French Assemblée nationale and elsewhere. On the basis of his experience in this field, Dr. Groiss was appointed as a member of the Scientific Advisory Panel (SAP) of the Palestinian-Israeli Schoolbook Research Project commissioned by the Council of Religious Institutions of the Holy Land (CRIHL). The project was funded by the US State Department and ended in February 2013. Dr. Groiss’ evaluation paper of this research project is to be found at http://israelbehindthenews.com/library/pdfs/EVALUATION-1.pdf.

[1] Archbishop Hanna has been known for his anti-Israeli attitude and was interrogated by Israeli police in 2002 on the grounds of his alleged support of Palestinian terrorist attacks against Israeli citizens.

[2] At least these two Catholic clergymen should have taken into consideration, while working on the above-quoted piece, the resolution adopted by the Second Vatican Council (1962-1965) that has acquitted the Jews, as a nation, of the traditional accusation of having killed Jesus Christ.