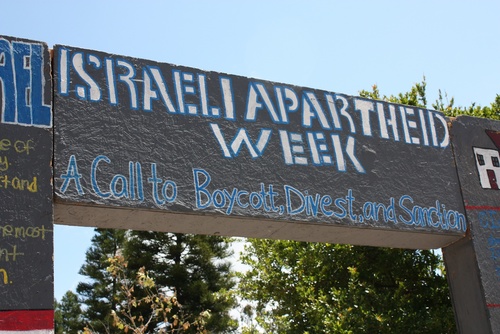 Pressing Israel: Media Bias Exposed from A-Z is ideal for the arm chair reader who would like a basic grasp of the terms used in the mainstream media’s presentation of the Arab-Israeli situation as is reported today.

This is a book whose time has come. This is a book where the reader gains a working knowledge of the terms being used in shaping the public’s perceptions, while being empowered to develop his or her own opinion.

Beginning with “Apartheid” – A False Charge Against Israel’, Section One of the book takes the reader through an alphabet of terms demonstrating the systematic demonization of Israel in the Western media, both by the usual suspects as well as supposedly neutral parties.

The authors demonstrate, in short, manageable snippets of information the seemingly deliberate misrepresentation, and in some cases blatant fabrication, of information-always to Israel’s detriment.

The strength of Pressing Israel: Media Bias Exposed from A-Z is in its ability to take seemingly complex words or phrases and, in a few words, expose how that word is used in misrepresenting Israel.

“The War that Followed Israel’s Creation” – No, it wasn’t. The 1948 war was a multiple-nation Arab invasion whose purpose was to destroy the nascent state of Israel and to forever reject the UN partition plan of November 29, 1947.

Short. To the point. Occasionally jaw-dropping. Always revealing. The possible disadvantage of this approach is that it leaves the reader with many questions.

In a world in which the general assumption is that “If everyone says it, it must be true,” the commonly accepted “truths” of the media are called into question at nearly every sentence.

This book is not a dictator of doctrine, it is a springboard towards further discovery.

The book addresses goals of the parties involved in the conflict such as Hamas and Fatah, as expressed in their documents of consequence. Following this background information, for those readers who know of Israel only as a troublesome party in the Middle East, and for those who identity Jerusalem only as a source of world conflict, the book paints a beautiful picture of the Jewish people’s connection, and thus irrevocable commitment, to the places in question. “Jewishness ‘ is more than just a religion.

Pressing Israel: Media Bias Exposed from A-Z emphasizes that Biblical story which is recounted in the land of Israel provides a narrative to show that the narrative of the Jews happened in Israel, and the Jews never left.

As the British cleric and historian James Parkes put it, “the heroic endurance of those who maintained a Jewish presence in The Land all the centuries, and in spite of every discouragement,” wrote the… “Real title deeds”

The reader may be shocked at the level of audacity exercised by Israel’s “Partners in Peace” in altering the narrative of history.

After all, during the July 2000 Camp David Summit, Yasser Arafat actually informed President Bill Clinton that “Solomon’s Temple was not built in Jerusalem, but Nablus.”

Pressing Israel: Media Bias Exposed from A-Z correctly concludes that “Israel doesn’t have the resources to counter every imbalanced news article in the Western media.”

This book represents a call to the ordinary media consumer to therefore become more informed on the way in which Israel’s opponents will use subtle or blatant terms in the media, in order to deglitimize Israel.

Pressing Israel: Media Bias Exposed from A-Z should sit on the coffee table of all consumers of the western mainstream media, to help them question news items that cry out for balance.

This article was originally published by The Times of Israel.