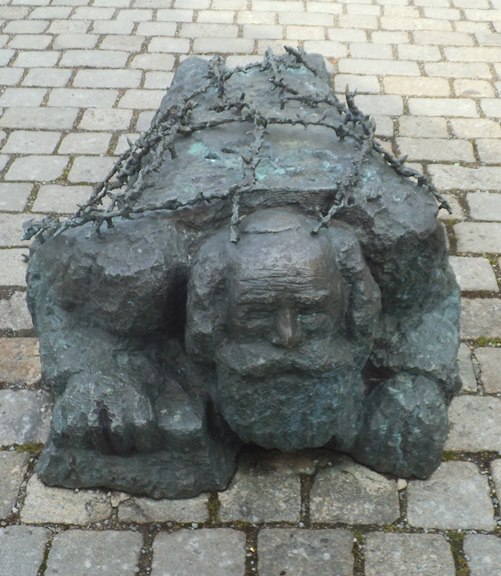 I had just left the Mozart Café in the heart of Vienna where horse-drawn carriages ply this historic district, and after noticing a tour guide with his group nearby looking at a sculpture, I stopped to see what it was.

The monument situated on the triangular site next to the State Opera House and Albertina Museum featured a sculpture of a Jew forced to kneel and scrub the streets after Austria was annexed by Hitler’s Germany in 1938, in what is known as the Anschluss. As the English sign nearby explained “After 12 May 1938, the Jewish citizens of Vienna were forced to scrub the streets that had been smeared with slogans. The bronze rendering of a kneeling street washing Jew is a reminder of the degradation and humiliation that preceded merciless persecution.”

As I walked around this sculpture of a street scrubbing Jew designed to remember the more than 60,000 Austrian Jews who were ultimately sent to the gas chambers, I couldn’t help but notice that a dog had crapped on the back end of the monument. As I snapped a photo of this, I began to wonder how often Viennese pet owners let their pets evacuate their bowels and urinate on the monument and how often it was cleaned by the city of Vienna.

I made a mental note to check online to see what I could learn about the monument, which is set among four large blocks of chiseled granite from the notorious quarry at the former Mauthausen concentration camp. And somehow I wasn’t terribly surprised to learn that the monument has attracted considerable controversy.

This monument sculpted by Alfred Hrdlicka to the victims of “fascism and war”, as its referred to in Vienna, was unveiled by the city on the 50th anniversary of the Anschluss and was supposed to be a warning against hatred and injustice. Notwithstanding that it was envisioned to be a place of quiet contemplation, remembrance and reconciliation, it has attracted different attention altogether, and apparently is regarded by many in the Viennese Jewish community as a bitter failure.

Although the English signage refers to the monument as a “Walk-in Monument” it has become a “Walk-on Monument.”

As the Washington Post reported in an article in 1990, not only does the monument bear the “stains of countless dogs who have raised hind legs upon it as their owners stood by”, but “Worse still, foreign tourists weary from sightseeing and apparently oblivious to the sculpture’s significance mindlessly plop themselves down upon the back of the elderly, bearded Jew. His life-size head may be covered with a skullcap and his hand tremulously clutching a scrub brush, but visitors of various nationalities nonetheless treat the three-dimensional depiction of human cruelty as a park bench.” It is a place where tourists gravitate to sit and eat hotdogs and leave their garbage behind. http://www.michaelzwise.com/articleDisplay.php?article_id=65

After the monument was vandalized with paint smeared on it in 1990, the Washington Post reported that the Viennese city council member responsible for public monuments had faced angry calls for the monument to be altered or removed altogether at a meeting of several hundred members of the Jewish community. “Many of those who took part in the session had themselves been forced to scrub the streets and lived through the Holocaust,” the newspaper reported.

Otto Neugasse told the Washington Post that he couldn’t bear the irreverence shown the monument and that Jews in Vienna avoid the Albertinaplatz so as not to be confronted by this horror.”

I did wonder why the monument wasn’t roped off in some way in order to prevent abuse but do not have the answer for this.

The other problem with the monument, as some Jews pointed out at the time of its construction is that the figure itself is an anti-Semitic caricature which arguably perpetuates an undesirable and distasteful image of the Jew as portrayed in the Nazi propaganda newspaper Der Stuermer. As such it may unfortunately serve to reinforce deep seated anti-Semitic stereotypes among the Austrian public rather than remedy them.

Interestingly enough, the sculpture caught the eye of Viennese director Robert Polack who went by a handful of times with a video camera to observe it and produced a short film, which shows tourists stepping on it, sipping beverages as they sit on it or lying on it while posing for snapshots.

Has the sculpture assisted the Viennese in confronting their Nazi past? Hrdlicka was reported by the Washington Post in 1990 to have said that that city police should have the task of standing watch over the sculpture, but based on what I observed that is not the case. Hrdlicka also said, “Monuments are not to blame for the mindlessness of mass tourism,” and opined that “Such a small figure has sparked a greater discussion over art and ideology than who knows how many major exhibitions.” In response to the concern that pet owners let dogs urinate on the figure, Hrdlicka said. “Hundreds of dogs piss daily against Saint Stephen’s Cathedral. Tear that down if you want!”

According to the English signage the site where the entire monument sits was “once the site of a prestigious apartment house from the late 19th century,” known as the Philipp-Hof. The site contains the remains of hundreds of Viennese who died “after seeking refuge in its cellars” during an Allied air raid on March 12, 1945, and whose “bodies could never be recovered from the rubble.”

Although the site was chosen by the city of Vienna in 1983 for the construction of the monument, in 1985-1986 once Austrian President Kurt Waldheim ‘s service as an intelligence officer in the Wehrmacht , a German army unit involved in war crimes raised internal and international controversy, some Viennese politicians and the city’s largest-circulation newspaper campaigned for its relocation to a less prominent site.